The puppies look almost too cute to be real, and that is just what vendors in the Yongchuan district of Chongqing in central China are hoping unwary customers will think as they shell out the 260 yuan or nearly $41 per dog.

Street vendors spend a bit of time rounding up stray mongrel puppies, then spray paint them with orange and black paints to appear like tigers. Then the little puppies are sold to some uninformed people as a rare and very valuable breed of “tiger dogs.” 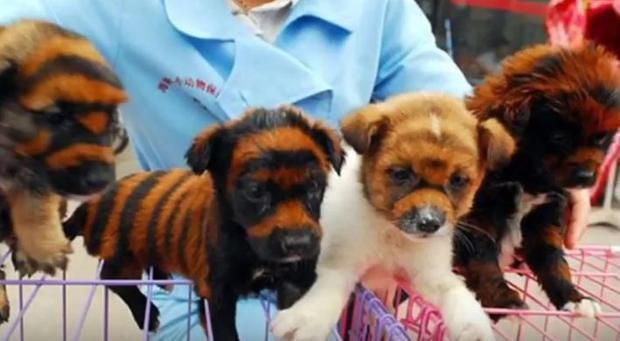 Chinese vendors dye their cute puppies to look just like tiger cubs… only for them to die painfully within weeks due to toxic inks
YouTube
Sadly, there seems to be a number of customers that believe some of these unscrupulous businessmen, because the puppies are finding their way into a number of homes, only to die a rather painful death about a week or two later.

The baby canines are still so young the harmful dyes used to create the stripes get absorbed through their skin, causing the little “tigers” to get sick. The Daily Mail reports that Veterinary experts from Chongqing Animal Hospital say the animals could die within a week if “high-quality” dyes are not used.

This latest attempt to create unusual pets is not a first for street vendors in China. There have been a number of attempts dating back several years. It is apparently so common that Internet users call them “week dogs.” 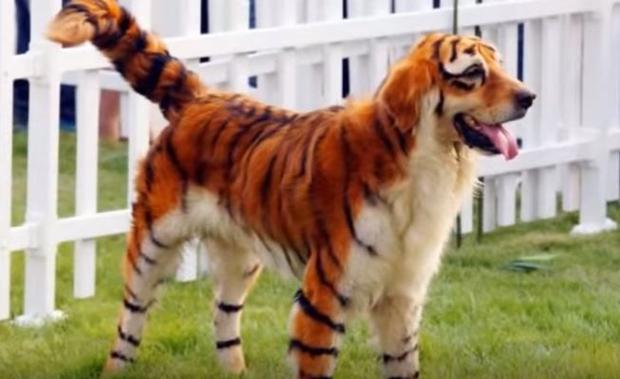 In 2010, the Year of the Tiger, a series of pictures showing orange puppies with black stripes caused controversy in China after they were posted online. These are “one week puppies” a name that hints at their short life expectancy due to the toxicity of the varnish they are painted with. Believe it or not, they are still very popular in China.
YouTube
Symptoms of ink poisoning can include lethargy, vomiting, a runny nose and refusal to eat. It ends with a painful death. Luckily, many of the puppies have been rescued by animal shelters. Either the paint was washed off or in some cases, the fur was shaved off, according to the NY Post.

Elisa Allen, the associate director at PETA, told the Daily Mail: “Dogs are smart, complex animals, not toys. There is no safe way to dye a dog or any other animal.There will always be risks of toxic poisoning… Putting a dog’s health at risk by treating a companion animal like a novelty trinket is both unethical and unnecessary.”