At least 40 local authorities statewide had already passed ordinances and resolutions banning fracking for oil and natural gas on their lands, and they would have been forced to cede this to a single state agency if the bill had become law, The Guardian reports.

Today was a good day for democracy and the Florida Everglades, said Kim Ross, of Floridians Against Fracking. This grassroots group of activists organized scores of rallies in recent months, including one in which 100 people protested at the capitol building on Tuesday.

“The people of Florida voted close to 80 percent to say they didn’t want frack,” she said, noting that the bill “really awakened a sleeping giant.”

“This is only a small part because the Everglades needs so much more,” she said. “There are all kinds of water and pollution issues. But for today at least this is a great and wonderful moment.”


State Sen. Garrett Richter (R-Naples) sponsored the bill, presenting it as a measure that provided more safeguards to residents, partly through a $1 million study by the Florida Department of Environmental Protection. The mechanics and chemicals used in hydraulic fracking, along with the possible effects on drinking water would have been examined in the study, which would have also guided new rules to govern the industry, Richter said. He also added there would have been a moratorium on exploratory drilling until the study was completed and rules were written up, The Guardian reports.

However, opponents argued that a study wasn’t necessary to see the threat posed by heavy drilling in Florida’s porous and fragile limestone bedrock.Drilling also posed a threat to the underground Biscayne Aquifer, which is the only source of fresh water for more than three million south Florida residents.

Because fracking threatens drinking water and the Everglades, bipartisan opposition to the measure came from every corner of the state, said Jennifer Rubiello, Environment Florida state director, according to Environment America.

“We’re delighted that senators have sided with the clean water and natural beauty that makes Florida famous, not with the narrow interests of the oil and gas polluters.”

As it is right now, Florida law doesn’t say much about fracking, but SB 3218 would have changed that by creating regulations for the environmentally risky drilling technique. As a boon to the oil and gas industry, the bill would have nullified existing ordinances that prevent fracking and would preempt all future local bans.

Perhaps even more harmful, the measure was intended to allow not just hydraulic fracking, but also “matrix acidizing,” in which acid is pumped into wells to dissolve limestone and stimulate the flow of oil and gas.

Rachel Richardson, the Stop Drilling program director for Environment America noted that fracking has caused air and water pollution and has ruined landscapes across the country.

“The only safe way to regulate fracking is to stop it before it starts,” she said.

SB 3218 drew widespread opposition from citizens in more than 80 counties and cities, as well as from environmental groups, and labor groups. Even a class of fifth graders testified against the measure last week. Every county listed in the Senate’s appropriations committee registered opposition to the bill.

The Senate counterpart of that bill, HB 191 had cleared the House, but because there are less than two weeks left of the legislative session, today’s action probably killed the fracking measure, Environment America reported.

Resolutions banning fracking “represent anyone who likes to drink, bathe in, wash their clothes and dishes in, cook, fish, and swim in fresh, clean water,” said Amy Datz, an environmental scientist with the Democratic Environmental Caucus of Florida, according to The Guardian.

“For every barrel of oil produced, 10 barrels of permanently hazardous, toxic water is produced [and] there is no safe or approved method to treat the potentially millions of gallons of backflow waste water. Florida has a supply of oil and gas that would supply the world market for four days but the toxins produced in the process could last more than 100 years.”

In conceding defeat, Richter said fracking in Florida was determined by the low price of oil, and said that the issue will surface again, The Guardian reports.

“When prices go up oil companies will produce more oil to meet demand, and that’s when we’ll see fracking again in this state,” he said.

He added that the bill was well-intended, and that he’d hoped to give regulators more “statutory tools to do their job.” He said he wanted to see laws that were stronger and more effective.

“This is a controversial subject, controversy will continue, and I dare say will draw even more concern when oil supplies drop and prices go up.”

But Ross said that the death of the fracking bill was a victory for common sense, and for the continuation of the campaign to protect the Everglades and other natural wonders within the state. 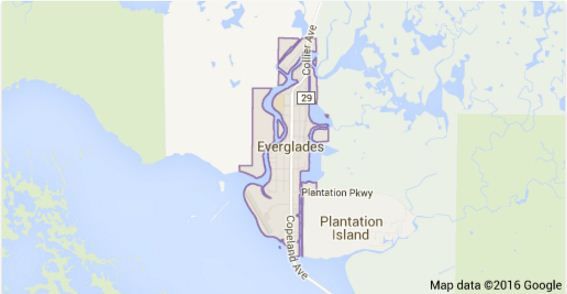 Map of the Florida Everglades.
Google

Possibly the most iconic wetland ecosystem in the U.S., the Everglades stretches for two million acres, from central Florida, near Orlando, all the way to south Florida Bay, according to The National Wildlife Federation.
It is home to an astonishing diversity of plants and wildlife, with more than 350 species of birds, including roseate spoonbills, glossy ibises, herons, and wood storks. The Everglades are also well-known for alligators and crocodiles, as well as many different species of snakes. The wetlands are also home to about 80 Florida panthers, the most endangered mammal in the Everglades.