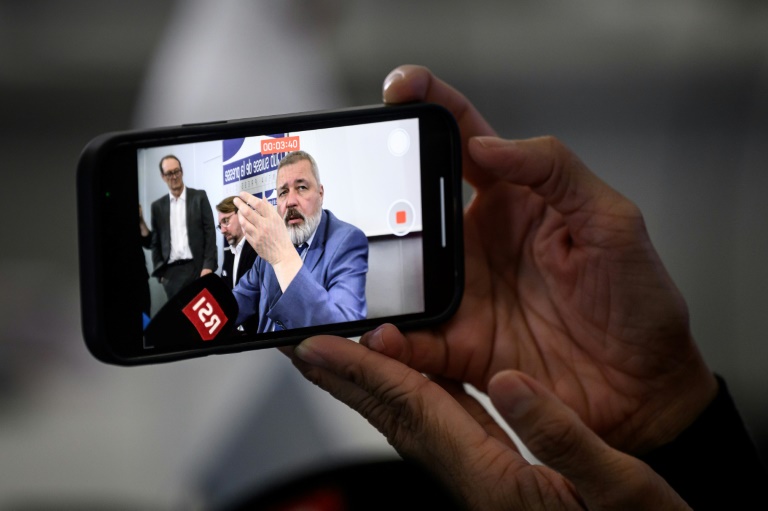 “I would not rule out the possibility that nuclear weapons might be used,” Muratov told journalists in Geneva, speaking through a translator.

The Kremlin said it had placed Russian nuclear forces on high alert shortly after its invasion of Ukraine began February 24.

And amid increasing Western support to Ukraine, Russian President Vladimir Putin has made thinly veiled threats hinting at a willingness to deploy Russia’s tactical nuclear weapons, which Russian military doctrine holds can be used to force an adversary to retreat.

Speaking at an event marking the World Press Freedom Day, Muratov, whose own Novaya Gazata newspaper has been forced to suspend publication amid Moscow’s military intervention, warned that the Kremlin’s “propaganda warriors” were striving to make nuclear weapons use more palatable to the Russian public.

“For two weeks now, we have been hearing from our television screens that nuclear silos should be opened,” he said.

“And we also hear that these horrible weapons should be used should the supplies of weapons to Ukraine continue,” he said, referring to the push by the United States, the European Union and others to arm the war-torn country.

Contrary to the propaganda narrative, deploying such weapons would “not be the end of the war,” he warned.

“This will be the end of humanity.”

He said the most frightening thing in Russia today is that Putin has acquired “unrestricted, absolute power.”

If he decides nuclear weapons should be used, Muratov said, “nobody can possibly stop this decision from being taken, … not parliament, not civil society, not the public.”

Speaking alongside Maria Ressa, the Filipino journalist with whom he shared the 2021 peace prize, Muratov also answered questions about an attack he suffered on a train in Russia last month, noting the perpetrator was being “shielded from criminal prosecution”.

A man had entered his train compartment on April 7 and thrown an oil-based paint mixed with acetone at him, burning his eyes.

Muratov said he himself had taken pictures of his assailant, police cameras had also caught his face, but nearly a month on, “not a single investigation” had been opened.

He said his Novaya Gazeta colleagues had identified the man as someone who had changed his name three times, and appeared to be a well-connected “imposter”.

Muratov pointed out that his attacker had known exactly where his seat was on the train, “which meant that he had access to … an intelligence service database.”

“He used the intelligence services resources, and he was shielded from criminal prosecution.”

Muratov said he did not believe his assailant was directly connected to Russia’s intelligence community, but perhaps rather a contractor with a private military corporation.

“A Private military corporation fits the profile,” he said.