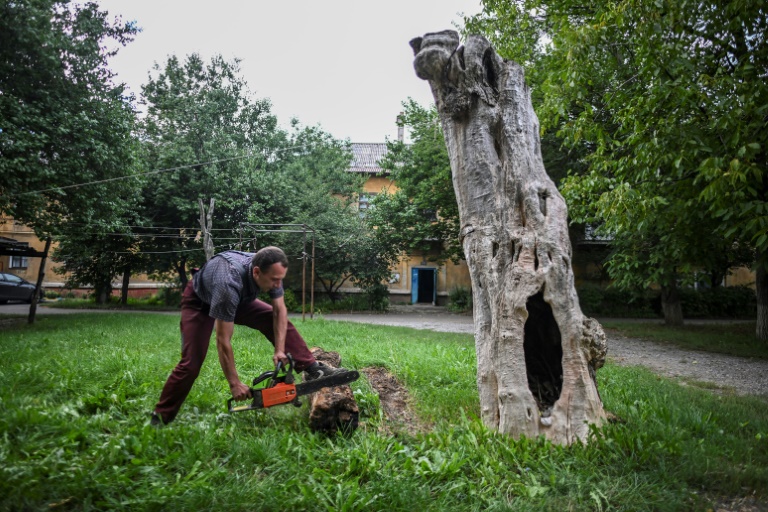 In a lush garden between two apartment blocks in the city of Kramatorsk, Oleskandr Matviyevsky chops dead trees into kindling.

Everyone in this part of the city around 25 kilometres (16 miles) from the front line, knows that winter will be harsh.

The gas has been cut off and the fighting shows no signs of stopping, with soldiers around the city preparing for battle.

Residents are stocking up on wood for the brick furnaces that have been set up in front of each building and for their heating stoves.

“We will group together to stay warm… and what will be, will be,” said Matviyevsky, chainsaw in hand, as artillery fire echoes in the background and air-raid sirens blare out.

“We were friendly before, we’ve only grown closer,” the 42-year-old worker said.

The gas was cut off in May in the Donetsk region, which is partly controlled by Russian forces, and in the neighbouring occupied Lugansk region after damage to infrastructure.

Ukrainian President Volodymyr Zelensky called for mandatory evacuation of civilians from the Donetsk region in July, both to avoid the fighting and ahead of the winter season.

But Olga, 60, said she had no intention of leaving her flat, even though a strike recently hit a building in her neighbourhood.

Local media have reported that some residents have been asked to sign waivers stating their decision to stay despite the warnings.

“I’m not signing anything,” said Olga.

“We will all die here together. If it’s one grave for everyone, then so be it. But we are standing strong,” she said, raising her fist in the air.

After living in Kramatorsk for 36 years, she has nowhere else to go.

Sitting on a bench in front of her building, surrounded by her neighbours and her cat, she said she feared her young grandchildren would struggle in the cold winter.

Around 60,000 people remain in Kramatorsk, out of the 220,000 living there before the war, according to local officials.

“We don’t have the resources to heat up the residential areas,” said Igor Yeskov, a spokesman for the city council.

But the city has been making preparations, including asking a local businessman to provide around a thousand traditional wood stoves to help those who remain.

The stoves are not suited to heating the city’s numerous apartment blocks, however.

Olga’s cousin Andrii Kasionkin, 54, has opted for another solution.

Since February, he has been living in his cellar with his family both to protect them from the bombing and in the hope that it will provide some warmth in winter.

“We live here for now and we try not to think about tomorrow,” he said.

“We are trying to live with dignity. Even in this situation.”

In the city of Sloviansk, closer to the front line, a local hospital has been preparing by installing a new heater that can burn waste, coal or wood.

Valentyna Glushchenko, the director of the hospital, said she was “very worried”.

“A healthy person can feel comfortable in different conditions, but a sick person requires a certain temperature. They need warmth during their treatment.”