Apparently, if you are a Canadian who has investments in U.S. cannabis companies, you may be banned from entering the states for life, even if you have never used marijuana yourself.

The Toronto Star describes the recent tensions at the U.S.-Canadian border — and the underlying effort to halt the marijuana industry in the U.S. — as a quiet, slow-burning conflict that appears to be growing.

Venture-Capitalist Sam Znaimer is from Vancouver, British Columbia. A few years ago, he started investing in American startup cannabis companies, according to CTV News. In May this year, while trying to travel to the U.S., he was stopped by border officials.

Znaimer was never asked about his personal consumption of pot, even though this question is allowed because marijuana is illegal in the U.S. based on federal statutes. Instead, Znaimer said Homeland Security interrogated him about his investments.

“In the course of four hours, they never did ask [about pot consumption] and I believe that was because they wanted to send a message to Canadians that it has not only to do with your personal behaviour but whether in any way you have invested in these companies,” he told CTV Vancouver on Thursday.

It may seem strange that he was not asked if he has ever used pot, considering the border patrol is allowed to ask that question. A Washington state immigration lawyer, Len Saunders, says the whole case is not that unique anymore. 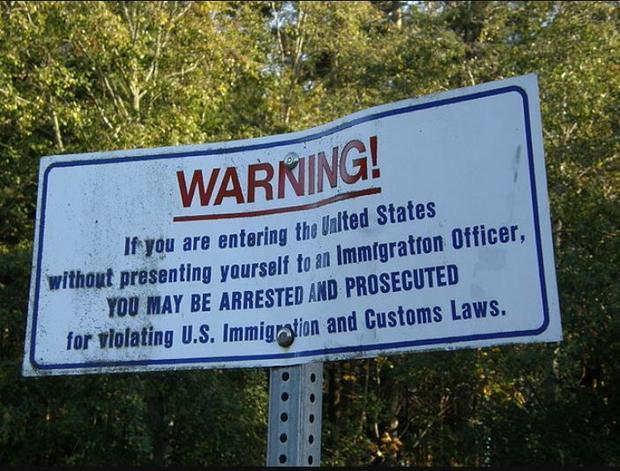 A sign at the international boundary between Canada and the United States in Point Roberts, Washington
Makaristos

Saunders says he has seen an uptick in the number of Canadian businesspeople being stopped at the border and denied entry or even banned from investing in U.S. companies.

“Some people are caught off guard,” Saunders said. “They think it’s legal in Washington state, which it is. It’s going to be legal in Canada, so what’s the big deal? Why not admit to the officer at the border that you’ve invested in a cannabis company in California?”

But as Saunders explains, the Department of Homeland Security’s definition of “business” appears to be very broad and can include mutual funds or any other investment plans. Saunders cites an Edmonton man who received a lifetime ban from entering the U.S. simply because he was a part-owner in a Colorado building that leases space to a pot dispensary.

The Cannabis Business Times sees these and numerous other episodes where Canadians have either been denied entry or banned from entering the U.S. as a major problem at the border if CBP continues its agressive questioning tactics.
And it seems that for Canadians with investments in pot companies at home, the CBP agents couldn’t care less. They just don’t want Canadians investing in U.S. pot companies.

As a matter of fact, Saunders testified before a Canadian Senate committee on Bill C-45 on March 19, 2018. He said: “When Trump talks about building a wall on the southern border, I see a wall on the northern border for Canadians because of marijuana.”

“It used to be the marijuana-related cases were almost always someone who admitted to smoking it,” Saunders tells Cannabis Business Times. “Within the last six months, I’ve seen a huge uptick on people who work for or own a marijuana-related business.”

“When the Americans—the CBP—pick up that these individuals are involved in the marijuana business, even indirectly, they’re denying them for one of two reasons: reason to believe that they’re involved with drug trafficking, which is a legitimate reason for denying them, or they’re living off the proceeds of drug money because they’re making money,” Saunders says.

A Bureau of International Narcotics and Law Enforcement Affairs press officer for the U.S. State Department told The Star via email that “admission requirements into the United States will not change due to Canada’s legalization of cannabis.”

In this article:banned for life, Canada, Investors, Marijuana, Politics, Us border patrol