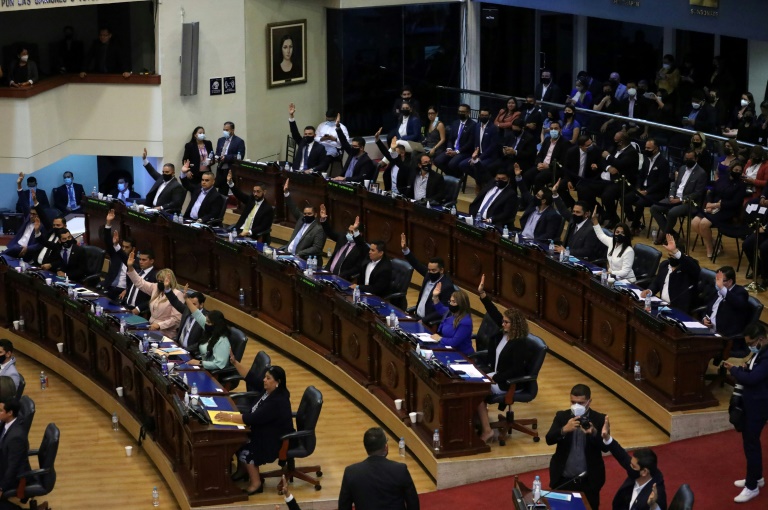 A political storm has erupted in El Salvador as its parliament, newly controlled by President Nayib Bukele’s party, voted to dismiss the attorney general and top judges deemed hostile to the populist leader.

Opposition parties are denouncing the move as a “coup,” while rights groups and international partners expressed grave concern even as Bukele celebrated.

“And the people of El Salvador, through their representatives, said: DISMISSED!” the young president crowed on Twitter after the majority vote Saturday, which came in the opening session of the new single-chamber Legislative Assembly.

The New Ideas party, which Bukele founded, gained an outright parliamentary majority in elections in February.

Bukele, himself elected in 2019 for a five-year term, had faced difficulty in getting some programs approved in a parliament previously dominated by two opposition parties — the right-wing Arena and leftist FMLN.

His detractors have long accused him of authoritarian tendencies, and observers had warned that an election victory for New Ideas could give him undue power.

The 39-year-old Bukele, who often sports jeans and a leather jacket in public with a baseball cap worn backwards, has clashed repeatedly with the Supreme Court and the public prosecutor’s office.

On Saturday, legislators voted to dismiss all five judges of the Constitutional Chamber, one of four organs of the Supreme Court, for allegedly issuing “arbitrary” judgments.

The Organization of American States (OAS) expressed alarm Sunday, urging respect for the democratic rule of law and separation of powers.

In a statement, the 35-member bloc said it “rejects the dismissal” of the judges and Attorney General Raul Melara, “as well as the actions of the Executive Branch that guided these decisions.”

It added: “Actions that lead to its erosion and the cooptation of the judiciary only lead to an unjust society, based on impunity and political persecution.”

The judges dismissed by parliament — which immediately named replacements — have refused to leave their posts, citing the move’s “unconstitutionality.”

The minority opposition in parliament decried a “coup.”

“What happened last night in the Legislative Assembly, with a majority that the people gave them through the vote, is a coup,” said Arena lawmaker Rene Portillo.

“As a parliamentary group, we will not be complicit in this coup,” added FMLN colleague Anabel Belloso.

US officials warned the legislature’s actions could harm relations with Washington.

Secretary of State Antony Blinken spoke to Bukele by telephone Sunday, expressing Washington’s “grave concern” and “noting that an independent judiciary is essential to democratic governance.”

He also criticized the dismissal of Melara, “who is fighting corruption and impunity and is an effective partner of efforts to combat crime in both the United States and El Salvador.”

The UN’s special rapporteur on the independence of judges and lawyers, Diego Garcia-Sayan, tweeted: “I condemn the steps that the political power has been taking to dismantle and weaken the judicial independence of the magistrates.”

“Bukele is breaking with the rule of law and seeks to concentrate all power in his hands,” Jose Miguel Vivanco, executive director of Human Rights Watch’s Americas division, said on Twitter.

“It is a situation which carries a profound risk. It (parliament) is playing with fire and may deepen this crisis to such a magnitude that we will not be able to get out of it,” Miguel Montenegro, director of El Salvador’s human rights commission, told AFP.

Bukele is popular for his desire to fight organized crime and insecurity. He has sought to cultivate an image as a man of the people in a country where the traditional parties are widely viewed as corrupt.

He is also seen in some quarters as a protector of the poor.

Allies of Bukele now hold 61 of the 84 seats in parliament, making him the first president in nearly three decades to have a majority in the legislature.

But some critics have pointed to authoritarian risks.

In February last year, in a bid to intimidate MPs into approving a loan to finance an anti-crime plan, the president ordered heavily armed police and soldiers to storm parliament.

That led lawmakers to call for a congressional committee to declare Bukele “mentally incapable” of governing — a move he denounced as an “attempted parliamentary coup.”

He was also accused of breaking electoral rules in campaigning for his party beyond the official cut-off date.