In a new study published in the journal Science Advances on March 7, Manoochehr Shirzaei at Arizona State University and Roland Bürgmann at the University of California, Berkeley show that major portions of San Francisco Bay’s shoreline are sinking faster than the sea is rising.

The increased risk of serious flooding could mean billions of dollars in damages in the coming decades as sea level rise continues due to climate change. In the San Francisco Bay Area, sea level rise alone could inundate an area between 50 and 410 square kilometers (19 to 158 square miles) by 2100.

Of course, these calculations are dependent on how much action is taken now to mitigate the effects of sea level rise and on how fast the polar ice caps are melting, say the authors. 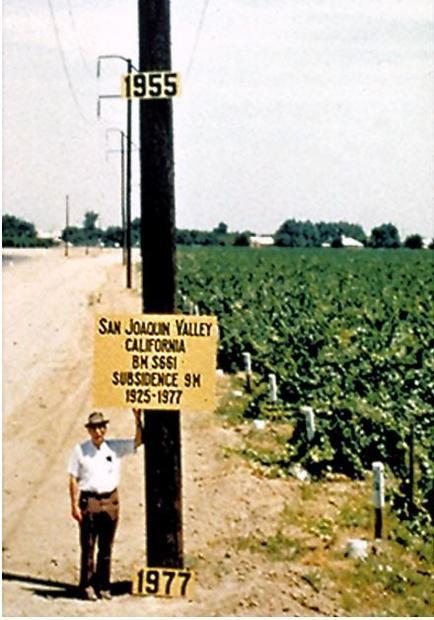 It’s called subsidence – the land is sinking
Much of the infrastructure along the Bay’s shoreline was built on mud that compacts over time, lending some stability. This land is sinking at a rate of about 2.0 millimeters a year, about the thickness of a nickel. But other areas aren’t so lucky.

Prominent areas, like San Francisco International Airport, Treasure Island, and Foster City were built on fill that was not densely compacted – like sand, gravel, garbage and other debris. These areas are sinking at a much faster rate, about 10 millimeters, or nearly half an inch a year.

Sea level rise is climbing at a rate of up to 3.0 millimeters per year. And according to the study, the risk of being underwater in some of these areas is not generations away but is much closer. 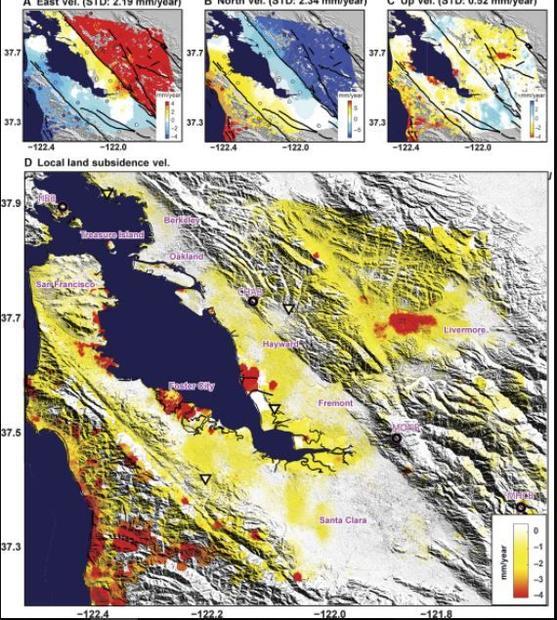 UC Berkeley Professor of Geophysics Roland Burgmann said, “These areas are more susceptible to sinking because they’re built on landfill that is compacting, water is being squeezed out of the rock, and that is and that continues for many, many decades.”

Basically, the Bay Area is not prepared for this. “This is a big problem in the Bay Area, Quite a few of these areas are developed. In terms of long-term planning, it’s a huge problem.”

How the study was done
Flood risk maps provided by the Federal Emergency Management Agency (FEMA) along with synthetic aperture radar interferometric measurements and global navigation satellite system data were used to come up with the subsidence rates. 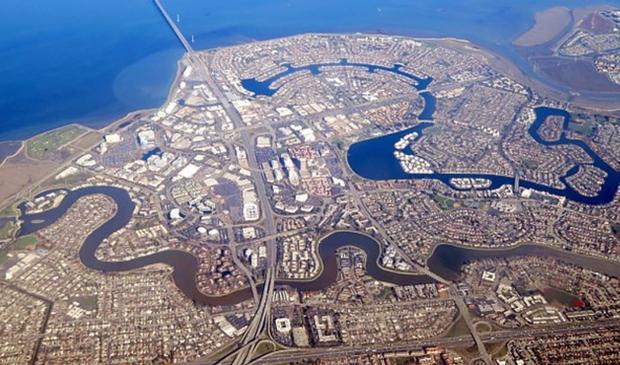 Foster City, along with Treasure Island and the San Francisco International Airport is sinking at a rate of 10 milimeters a year.
Pi.1415926535 on Wikimedia Commons

However, the FEMA maps estimating 100-year inundation hazards were solely based on the projection of sea level rise from various emission scenarios, and they underestimate the area at risk of flooding by 3.7 to 90.9 percent, compared with revised maps that account for the contribution of local land subsidence.

And adding land subsidence to the equation changes the figures a great deal. The study reports that “Given ongoing land subsidence, we project that an area of 125 to 429 km2 will be vulnerable to inundation, as opposed to 51 to 413 km2 considering sea level rise alone.”

“There is no permanent solution to this problem,” Shirzaei, one of the paper’s authors told Wired. “The forces are immense, it’s a very powerful process, the cost of really dealing with it is huge, and it requires long-term planning. I’m not so sure there’s a good way to avoid it.”