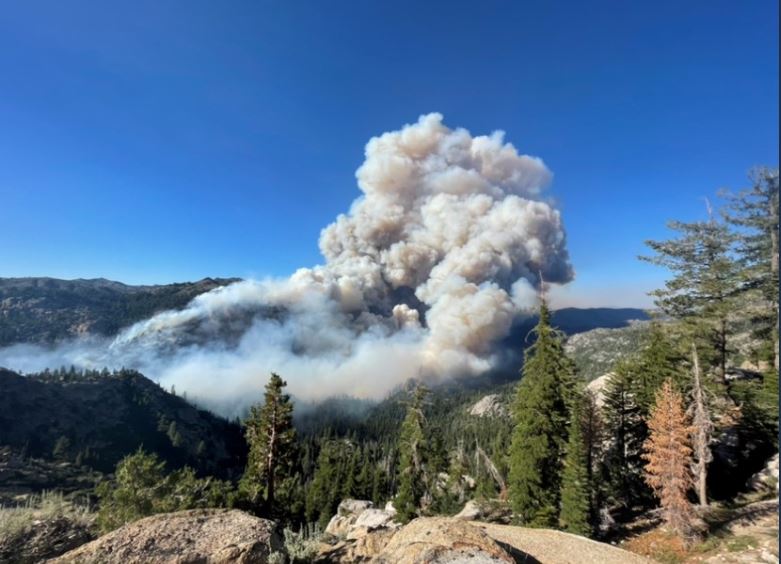 A rapidly growing wildfire south of Lake Tahoe jumped a highway, prompting more evacuations and the cancellation of an extreme bike ride through the Sierra Nevada on Saturday, while Oregon’s largely uncontained Bootleg Fire is ballooning – surging 4 to 5 miles per day.

The Tamarack Fire, which was sparked by lightning on July 4, exploded overnight to at least 10 square miles (26 square kilometers), forcing the closure of multiple highways in the area, according to the Alpine County Sheriff’s Office.

USA Today is reporting the fire is located near Markleeville and Pleasant Valley, and mandatory evacuation orders were in place for Markleeville, Grover’s Hot Springs Park and Campground, Shay Creek, Markleeville Village, and East Fork Resort.

The Tamarack fire has caused the cancelation of the 40th anniversary of the 103-mile Death Ride through 3 iconic mountain passes of the so-called California Alps. The ride attracts thousands of riders and had to be canceled last year because of the coronavirus pandemic.

Afternoon winds blowing at 20 to 30 mph (32 to 48 kph) fanned the flames as they chewed through bone-dry timber and brush. Meteorologists predicted critically dangerous fire weather through at least Monday in both California and southern Oregon, where the largest wildfire in the U.S. continued to race through bone-dry forests.

Dry and windy conditions continue to fuel the Bootleg Fire

The Bootleg Fire, the biggest wildfire burning in the U.S. – grew significantly overnight, fueled by erratic winds and extremely dry conditions. Firefighters were able to triple containment of the fire along the western flank, but the fire was still burning rapidly and dangerously along its southern and eastern flanks.

The fire is now 439 square miles (1,137 square kilometers) in size, or more than 100 square miles larger than the area of New York City, reports the Associated Press.

“This fire is large and moving so fast, every day it progresses 4 to 5 miles,” said Incident Commander Joe Hassel. “One of the many challenges that our firefighters face every day is working in new country that can present new hazards all the time.”

The Bootleg Fire has destroyed at least 67 homes and 117 outbuildings and has forced 2,000 people to evacuate. It is now threatening an additional 5,000 buildings, including homes and smaller structures, according to CBS News.

These two fires are part of at least a dozen fires burning in Washington state, Oregon, and California. There were 70 active large fires and complexes of multiple fires that have burned nearly 1,659 square miles (4,297 square kilometers) in the U.S., the National Interagency Fire Center said. The U.S. Forest Service said at least 16 major fires were burning in the Pacific Northwest alone.