A new move, the deployment of USAF forces including B1 bombers to Australia, is being touted as a “deterrent” to China. This move comes in the midst of a strategic redeployment by the US to improve resources near the hot zones in the world around the Indian Ocean and elsewhere.
The B1s are supposed to be based in Darwin, well within flying range of the South China Sea area. A small force of U.S. Marines is also based in Darwin and US Navy forces are operating joint facilities in Western Australia.
To call this a “deterrent” is pretty absurd. The B1s can certainly do some useful reconnaissance work from Darwin, but what will they “deter”? B1s were used in combat in Afghanistan, for local tactical targets. They’re not, however, B2s, or the best platform for a real Cold War style “deterrent.”
Strategy
The strategic picture, in fact, is much more complex. The US is a third party — to a clearly defined point — in most of the disputes about the South China Sea. US interests and assets aren’t directly at risk. No overt aggression has taken place against American allies. This is a particularly bitchy part of the world, diplomatically, on a par with Europe at its worst, and the various territorial claims have been going on for decades.
The value of the Chinese artificial islands is highly debatable. As a grandstanding territorial move, it’s flat-footed at best. Militarily, it’s not a good move in any form. Those islands can’t be defended against any modern military force. They’re sitting ducks for any kind of ordnance. Even as engineering, building sand islands in one of the world’s cyclone hot spots is a very debatable idea, expensive and likely to be more so over time. 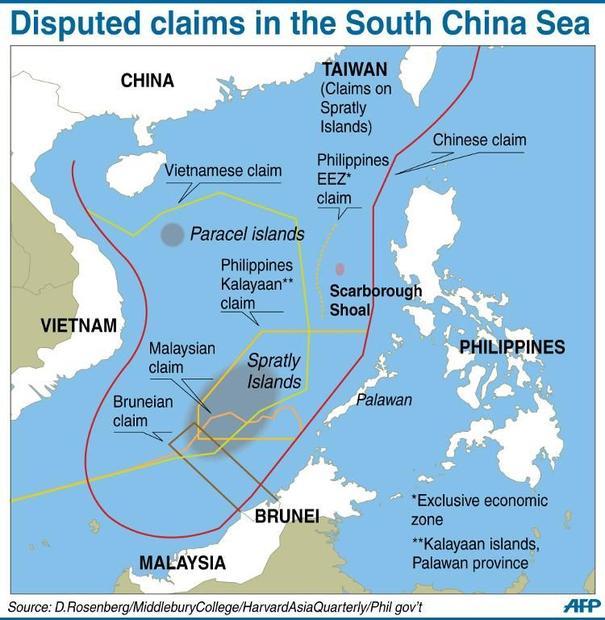 Graphic on the disputed claims in the South China Sea
, AFP

The US/China dichotomy is also not likely to be the first cause of a real conflict. If China gets in to an actual armed conflict, it’s likely to be with Japan. The Japanese have expressed extreme displeasure at China’s territorial claims, and confrontations between their forces have been quite common for a couple of years.
The problem, ironically, isn’t the conflict itself, but likely ramifications of a conflict. Both sides can lose this conflict. If China loses, the defeat will be unforgivable, an excuse for more hardline political groups. If Japan loses, national sentiment will go ballistic. Both scenarios are precursors of future conflict. A small war now could produce a big war later.
The US has said it will support Japan. Russia, of course, will support China. While this situation is unlikely to produce a major global conflict, the risks of expanding the frame of reference are obvious.
Tactics
Tactically, a less defensible, less appealing position than a few rocks in the open sea is hard to imagine. There are no civilians to consider, and the islands are at the far end of Chinese air capabilities. It’s an idiotic tactical configuration. The islands disputed with Japan do no favors to either side in terms of range, but numbers over target could make a big difference. 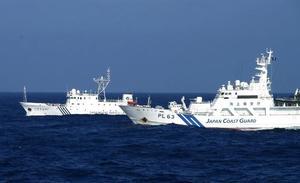 Japan has excellent naval and air capacity, but it could go either way, depending on the forces involved and ability to deliver strikes to opposing forces. The Chinese air force, which has been upgrading from its vintage museum pieces to modern fighters for some years, may or may not have the capacity to handle a sustained conflict.
In the other regions, the US has trump cards in its carrier and submarine forces. Those islands can’t be held. They can be physically destroyed using known methods which break up subsurface structures. There is no realistic scenario in which the islands can be much more than a shooting gallery to opposing forces. Putting SAMs on them would just add another target. 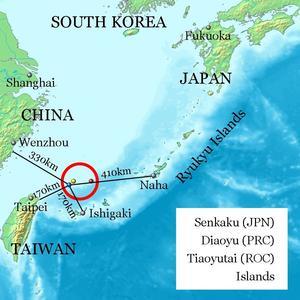 One look at a map says more than anyone seems to be prepared to listen to.
Wikipedia

The military capacity of other nations in the region, except South Korea, is debatable. South Korea can mount effective offensive and defensive actions. Whether North Korea could resist getting involved, however, complicates the evaluation, and could provide a further area of conflict.
Trade
The most likely first victim of a real conflict with China would be trade. It’d affect the world, rather badly and definitely expensively. If the South China Sea, one of the world’s busiest areas for shipping, becomes a war zone, the risk of adding injury to injury goes up immediately.
There’s a real risk of ships being attacked as “spies” or “enemy vessels” as well as by accident. Modern anti-shipping weapons are much more effective than their predecessors. Any hits are likely to do a lot of damage. This isn’t the sort of scenario where being a possible target is a good idea. It’s likely, and advisable, that shipping will abort, re-route, or simply not go to the danger zone. That effect will screw up global trade very effectively, very quickly.
Diplomacy
From the extremely jaded Australian perspective, having so many of our trading partners, allies and neighbors engaged in a catfight over a few rocks is rather uninspiring, to say the least. Not a lot of good can come from any actual conflict except the end of the conflict, and the current diplomatic environment is toxic.
Regionally, this situation is a new armpit in the sweaty, irritable world of Asian negotiations, trade talks, and regional management issues. We have nothing to gain from the situation at all. China’s position, in terms of its actions, is opaque. There’s no obvious benefit. Some oil and gas, perhaps, but that’s hardly a reason for serious risks. It’s hard to imagine a more pointless range of possibilities.
Reality?
China’s record in offensive actions isn’t great. Historically, it’s appalling, since the Tang Dynasty. Aggression has never been particularly effective for China either as policy or as a military fact. Their current capacity to actually attack their neighbors is seriously limited. While their upgrades to their military have been quite natural and necessary, (Until 2000, they were basically using antiques) capacity is another issue. They don’t have the resources to maintain the necessary size or the kind of combat capacity required to defeat modern military forces in the region. A sustained conflict wouldn’t go well.
Historically, their forays outside China have been less than impressive. The Korean War cost horrendous casualties from disease, as well as combat. The invasion of Vietnam in the late 70s was repelled by second line and local Vietnamese troops with heavy losses. The annexation of Tibet was against a small population spread over a large area with almost no military resources of any kind. That’s not exactly the case in this scenario.
Nukes aren’t an option, except in disproportionate strategic nightmares, and they’re very over-matched in that regard. Russia has better things to do with its time and resources than fight a meaningless war over a few new pigeon coops in the South China Sea. North Korea is to put it mildly an unpredictable liability, more likely to create more problems than provide any meaningful value in alliance.
China should either provide a comprehensible reason for its policies, or at least defuse some of the conflicts with its neighbors. I, for one, am getting tired of saying that this approach to territorial claims is a very serious mistake. I’m sure most other China watchers are arriving at, or already held, the same view.
The sheer stupidity of this situation bothers me more than the hard facts. Those able to make mistakes like this, on this scale, could move on to bigger, bolder, mistakes. The idea that China should have come so far, so fast, just to put a potential military, economic and political noose around its neck is obscene.
In Xiang Qi, Chinese chess, the general/king is targeted within his own territory. That analogy shouldn’t need to be explained. Until this imbecilic episode and with the exception of a few cyber-boorish issues, nobody had much reason to have anything at all against China. The nation’s huge economic progress was admired, a major national achievement.
The Long March should be over, mentally, as well as physically. China has nobody to fight, unless it starts a fight. Let’s hope that doesn’t happen.
Post script: The US and Australia have since denied that there’s any specific proposal to deploy B1s in Australia. It’s a matter of opinion whether China cares about specific details. 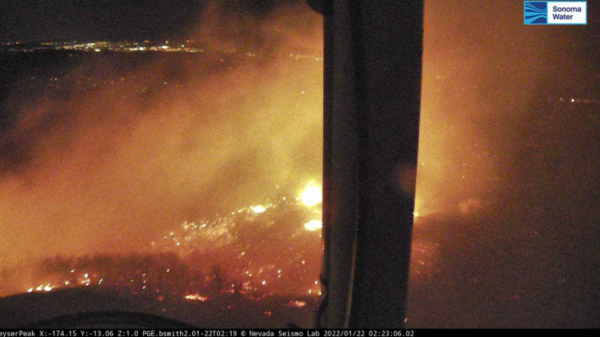 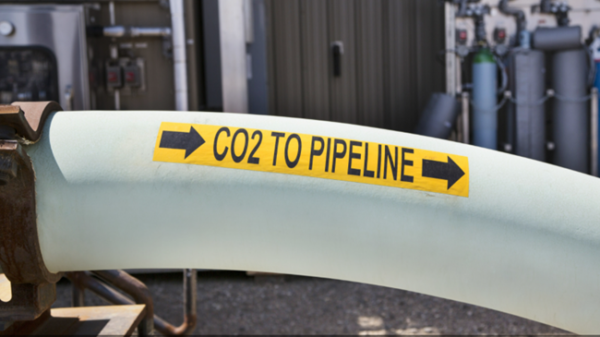