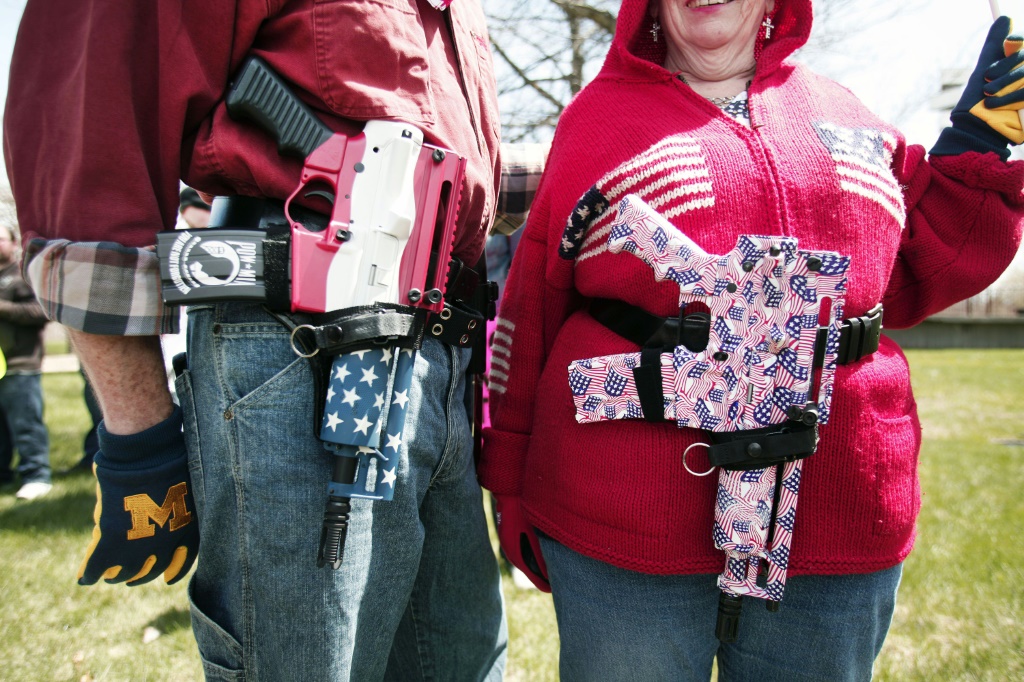 Who needs World War 3, when you have the Supreme Court of the United States? A 6-3 conservative judges decision has effectively removed safeguards regarding the public carrying of firearms in New York.

The number of gun deaths, suicide and homicide, has gone up to almost equal the entire number of American deaths from the Vietnam War, per year. Apparently, that’s not even a consideration?

This is clearly a gun lobby-based “decision”. Common sense may say people carrying guns could lead to trouble, but not SCOTUS.

The “decision” is based on the Second Amendment.

The Second Amendment is one sentence:

A well regulated Militia, being necessary to the security of a free State, the right of the people to keep and bear Arms, shall not be infringed.

“A well-regulated Militia…”? Who, MS 13? Any random serial killer? One of those nice folksy heavily-armed psychopaths? So they can now carry any weapons they like?

Oh, joy! The bullet-riddled American Dream must be doing well, then? Little Johnny came marching home with his first high-caliber wounds? Little Dottie will someday have a face again? You must be over the moon, America.

“…being necessary to the security of a free State…” How secure can a state be, with more guns than people? A bit obsessive, isn’t it?

A free State in which the decades of protest against rampant gun violence are completely ignored? How “free” is that? Not at all, in fact.

If it’s an inevitable source of misery for Americans, SCOTUS will make sure it happens. The sheer hatred of humanity embodied in this ruling is absolutely typical of SCOTUS in its current necrophiliac form.

There is no better possible way of ensuring more mass shootings. This ain’t Bonanza. In all the mass shootings so far, not one gun-carrying hero has intervened with a gun. Instead of a secure free State, you’ve got a coast-to-coast shooting gallery.

The Supreme Court must go

This useless, skank-like rotting anachronism has clearly outlived any possible purpose. There’s no real need for SCOTUS. State courts can uphold Federal laws as well as their own.  Political bias has obviously made SCOTUS unfit for purpose.

It doesn’t uphold anything except what its owners want. That’s not even a pretense at law. It’s a dictatorship. It’s the exact opposite of a free State in anyone’s language.

So how do you replace the Supreme Court?

For one thing, you don’t have immovable political appointees. Judges can rise to an eligible rank. They can be convened the same way a circuit judge is appointed. You can convene a Federal Court panel. Preferably qualified people who can read and write.

For disputes between states, an independent judiciary can be appointed on an at-needs basis – Whoever’s available in the Federal Courts system, just not from those disputing states. Not too hard to comprehend, is it?

The alternative is more debasement of the Constitution. Not much of a choice, is it?

It’s easy to see where the Roe vs Wade decision will go based on this latest judicial atrocity. This time it’ll be the religious lobby calling the shots, pun intended. Definitely not the people. As usual, never the people.

This is where the fan gets hit harder than ever before. In context with the Constitution, this is the example of SCOTUS overextending its reach:

…So why is SCOTUS even hearing this case? Why was there ever a Roe vs Wade? There is no constitutional power to tell people to have, or not have, kids.

That’s why SCOTUS has to go. The Court has effectively taken away the power of Congress in making laws. It’s creating laws by making rulings.

That’s not what it’s for. It’s supposed to uphold the Constitution, not rewrite it to suit lobbyists. Any independent judges could do that as routine business, and do it a lot better.

SCOTUS is supposed to be about making good laws. So far, it’s just generating more fully justified scatology than law, good or otherwise.

In this article:concealed weapons, guns, Homicide, Scotus, US Supreme Court