Milarch’s work is core-level conservation. Tree cloning has been around since the 1970s, and it’s a meaningful approach to preserving at-risk species. The sequoias are a case in point. The ancient trees can be up to 2000 years old, and they date back to the dinosaurs. They’re the epitome of a survivor species, but now at serious threat from human land clearing, logging, and global warming.
Much less obvious is the “old growth” issue. Old growth forests aren’t really just leftovers from the past. They’re major ecological components. Sequoias are a good example. Like many large trees, the sequoias are environmental powerhouses. They provide environments for ecological supports ranging from insects to microbiota.
Old growth forests are truly complex. The name “old growth” is more than a bit misleading. These are old forests, but they’re also some of the most advanced and most highly evolved environments. They may be “primeval”, but they’re also great examples of functional environmental adaption to the Earth’s many moods over tens of millions of years.
They’re also now the front line of conservation. The news about old growth preservation and controversies is more or less continuous. The question is whether anyone quite understands their importance, both environmentally and scientifically.
They have many local variants and species worldwide. They’re self-supporting in many ways, a virtual roadmap of how environments cycle materials and survive multiple events over long periods of time. Everything in a forest supports other parts of the forest. Rainforests are the archetypes of this process. Nothing is wasted; everything is reused. It’s natural permaculture. (In fact, forest structures are the basis of permaculture; planting supporting trees and plants to produce food with supporting structures to maintain longevity and promote productive growth.)
The critical factors in old growth forest preservation 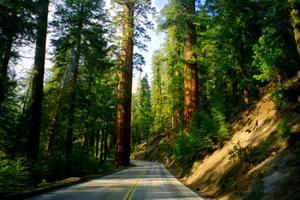 The thing to know about old growth forests is that they are also at the high end of environmental dynamics. Old growth forests may incorporate thousands of plants and billions of related organisms. The sequoias are major producers in these regards. They don’t just grow themselves; they support the rest of their environments.
Old growth forests are also pretty much under-explored in purely biological terms. These forests are vast databases of knowledge, most of it unknown. Science has only recently had the capacity to study things like genetics, microbiota and similar fundamentals in any degree of proper depth.
The theory of forests as survivors and self-supporting environments really just explains the obvious facts. The theory itself is barely 100 years old, if that. Knowing the principles, however, is a long way from having the knowledge to rebuild them and learn from them.
The damage problem
It’s impossible to quantify how much has been lost as a result of cutting down the sequoias and destroying their forests. How much useful science has literally gone up in smoke, or wound up as building materials and furniture? Most of these environments have never been adequately studied in anything like the necessary depth. It’s an unbelievably stupid, wasteful, situation.
The old growth forests aren’t alone. One of the almost-jokes about the Amazon, for example, is about how many valuable chemistry lessons are destroyed every time part of it is cleared. Any number of biological assets is wasted in the name of providing pastureland. Every tree knocked down, or every chemical compound may have been a billion-dollar patent, a life-saving drug catalyst, etc. 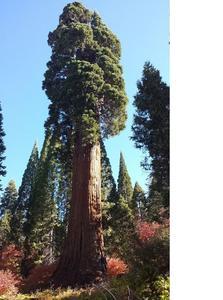 The Methuselah tree is one of the largest Sequoias in the Mountain Home Grove
Mike S. Clark

The environmental destruction also “replaces” high-value science with almost useless commercial short-term interests at the cost of a healthy environment and at a great human cost. A healthy environment includes unpolluted water, fresh air, and other luxuries.
The net result is to also severely damage or destroy the genomes and gene pools of the forests. This is simply insane. Fortunately, there is a fix, and David Milarch’s work is a great example of how to do it.
Cloning the forests – High values for conservation and science
To fully regenerate the lost forests, and preserve the genomes the need is to clone the forests, on much the same basis as David Milarch is doing with the sequoias. The need is to expand the scale of this work. Cloning is pretty straightforward, relatively cheap, and highly productive. A single seed can produce thousands of clones. You can in theory rebuild an entire forest, provided you maintain a healthy gene pool of different genes from each species.
Consider this sequence – The sequoias are the big solid foundations of the forests. You clone them and plant them first. Next comes the understorey, the organisms, algae, fungi, and trying to regenerate the forests from the clones. Some of these organisms are easy to produce without cloning. Some are virtually unknown.
It’s worth noting at this point that planting sequoias and other ancient hard case old growth survivor species of trees is more than likely a very good option for survival of whole environments. These trees have seen it all and survived where whole environments didn’t. They’ve also provided habitats for emerging environments and their organisms. There is simply no way of overstating their importance to the continuity of life.
The science of old growth forests
Sequoias are big, tough, temperate climate plants usually associated with America’s very diverse far west. They can colonize areas which are also big and too tough for other trees. They can break up and manage demanding soils and extreme weather conditions. They create living environments in these areas which are then colonized by other organisms. Birds, insects and animals move in as the forests develop.
As you might have gathered, it’s not that simple in practice. A viable new old-growth forest needs to be understood, as well as planted. The science is also more than a bit tough. How these trees have survived in various forms since the Late Cretaceous and adapted through Ice ages, global warming events, etc. is a study in itself. The bar for study, as well as practical reforestation, is very high indeed, but well worth it for the sake of both humanity and the world’s survival.
David Milarch is putting into practice what responsible environmental managers should be doing. Cloning is not exactly an unknown science. It’s highly efficient, and not wasteful. Proper study and forest structuring would be very high value as research, too. Studying a living forest is one thing – Tracking it from day one, however, is a whole new ball game for understanding basic ecological mechanisms.
Let’s hope someone takes the hint and follows Milarch’s lead. It’d be well worth everyone’s time to do so. It really is saving the future.