The Russian exercises in Belarus were called ZAPAD. They involved all arms of the Russian ground, missile, and air services. Reviews made much of increased Russian drone capacity, huge amounts of firepower, and the proximity to the Polish border.
The expected commentary about “catching up with the West” and “a challenge to NATO”, (perhaps doing a lap of honour before this tired terminology is finally laid to rest), was also very prominent. As reviews go, there wasn’t much new to be seen.
Soviet analogies, increasingly irrelevant, also lurked in the commentary like old drinkers in a bar. The Russian military has been shedding its Soviet-era baggage, including theoretical baggage, for decades now. Even relatively balanced commentaries couldn’t quite resist the temptation to dwell on the old, largely obsolete military model while reporting on the new Russian military. Let’s get this straight – The old Russian model no longer exists. It shouldn’t be part of any analysis.
An inexcusably lot less was said about something much more important – The refocusing of the entire Russian military in to an agile, much more focused, configuration. Since Russia’s entry in to the Syrian conflict, these elements are very high priority in terms of assessing actual military capacity.
A bit of background about the reconfiguration of the Russian military – In the past, the Soviet military was a very high volume, very large, structure. Everything was made in huge numbers, from tanks to ICBMs and submarines.
This type of military model is a true dinosaur, totally unrealistic in modern warfare on just about every level. The absurdity of trying to upgrade vast numbers of anything in any military should be obvious. Large forces are uneconomical in peacetime, and basically not much more than bigger targets for modern weaponry in wartime.
Big numbers may mean added capacity, but can also mean added inefficiencies on a truly unacceptable scale, particularly for Russia. The vast range of very necessary system and force profile upgrades over the last decade shouldn’t be surprising to analysts. Russia is a gigantic country. Modern war moves fast, and fast responses are essential.
To explain without actually using crayons – A big lumbering military bear is far less efficient than a fast military wolf pack. Adding a few divisions, as some analysts have suggested Russia is contemplating, would simply add to reserve and defensive capabilities, without intruding on the new frontline configurations much at all.
NATO missing the point?
Putin is neither a fool, nor superficial. The ZAPAD exercises apparently showed exactly what everyone expected to see. There was even the traditional outrage that the exercises used more troops than advertised. That was about as superficial as ZAPAD needed to be.
As though it matters. As an attention getter, ZAPAD was very effective. It doesn’t really matter whether the Russians used 13,000 troops or tens of thousands. The blunt but clear message is “This is what we can put here right now”. Nor should anyone be too surprised that the exercises as a show were also very high on firepower, a staple commodity in Russian military profiles.
What NATO should be looking at are the new military doctrines which will inevitably arise from the new configurations. Russia is apparently adopting a more forward defensive/offensive posture. Good logistics, better tech and support make excellent sense in this context. You’re now looking at a far more capable and obviously purpose built machine. This very mobile type of force configurations is built to hit hard and fast.
Equally to the point, this is an easily sustainable military profile for Russia. All that’s required is to have a good frontline force which can be expanded if necessary. There’s no need to spend vast amounts on a standing force at all.
Technology, too, of course, was a feature of ZAPAD. Did anyone really expect the Russians to showcase more advanced capabilities? Hardly. The far more likely scenario is that what was shown in ZAPAD were baseline forces, not advanced forces.
The West continues to assume that Russia is technically disadvantaged. That may have been the case before, but not now. Russia can access any technologies it wants, directly or indirectly, regardless of Western assumptions of superiority. It would be naïve in the extreme to assume otherwise. 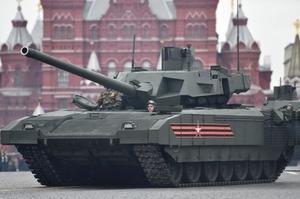 The US, which is looking hard at its own scales of future operations, should take note of the many Russian workarounds. Consider the new T-14 Armata tank, a somewhat sawn-off MBT (main battle tank). It’s lighter than the US M1, with a lot of onboard systems, high speed, and multiple new systems onboard, including defensive systems. Consider also that this is the exact opposite of the previous tank doctrine, and that the Armata is a lot cheaper than Western MBTs.
ZAPAD shows a major, anything but superficial, rethink of Russian military capabilities on all levels. The current military profile is definitely not a global warfighting profile. It’s designed to fight efficiently, relatively close to home. If a few sharp nudges to neighbors are required, it can do that, too. For the price of a few photos, ZAPAD has also shown that the West should be rethinking its own assumptions – Preferably much less superficially.