According to the new rule book: Now, the American 1,176-page “Department of Defense Law of War Manual” says that it is perfectly legitimate to shoot, explode, bomb, stab, or cut journalists they deem “belligerent”. They seem to want to make sure they cover all the ways they will kill enemy reporters. They clarify that poison and asphyxiating gases are still no-nos that will not be employed in the war against journalists.
While still allowing that in general journalists are civilians, the rule book also says that journalists may be members of the armed forces, persons authorized to accompany the armed forces, or unprivileged belligerents.
The term “unprivileged belligerent” is not defined. The account given in Wikipedia would not seem to allow journalists as unprivileged belligerents: An unlawful combatant, illegal combatant or unprivileged combatant/belligerent is a combatant who directly engages in armed conflict in violation of the laws of war. An unlawful combatant may be detained or prosecuted under the domestic law of the detaining state for such action; subject of course to international treaties on justice and human rights.[1] Journalists would not be engaged in armed conflict at all in most situations.

The new law could be considered simply a codification of past practice. Journalists have often been targeted it appears not because they were on the “other side” but because they were critical of the side that targets them. In the early days of the 2003 invasion of Iraq, the Bush-Cheney administration considered bombing the main studio and office building of Al Jazeera in Qatar. While it was decided not to go ahead with the plan there was a rocket and machine gun attack on the Al Jazeera Baghdad bureau on April 8, 2002. The US claims the attack was “inadvertent” although Al Jazeera had given the US the coordinates of the site. Another attack by a tank firing an artillery shell on the Palestine hotel where almost the entire foreign press stayed killed a Reuters cameraman and a Spanish TV worker.

If the journalists work for the other side, present practice appears to provide them no protection at all. NATO attacked the Radio, Television, of Serbia(RTS) headquarters in Sarajevo. Sixteen employees of RTS died when a NATO missile hit the building. Amnesty International called the bombing a war crime while Noam Chomsky said it was an act of terrorism. However, many defended the attack: Tony Blair, in Washington for Nato’s 50th anniversary summit, insisted that bombing television stations was ‘entirely justified’ since they were part of the ‘apparatus of dictatorship and power of Milosevic’. He added: ‘The responsibility for every single part of this action lies with the man who has engaged in this policy of ethnic cleansing and must be stopped.’

What is allowed for NATO and the US is surely legitimate for Israel. In an attack in Gaza, Israel fired several missiles directly at a building housing Al-Aksa TV station, but it also housed offices of a number of foreign journalists. Two Al-Aksa cameramen were killed in the strike. Israel admits targeting the journalists killed claiming that since they worked for the Hamas-owned stations they were terrorists. 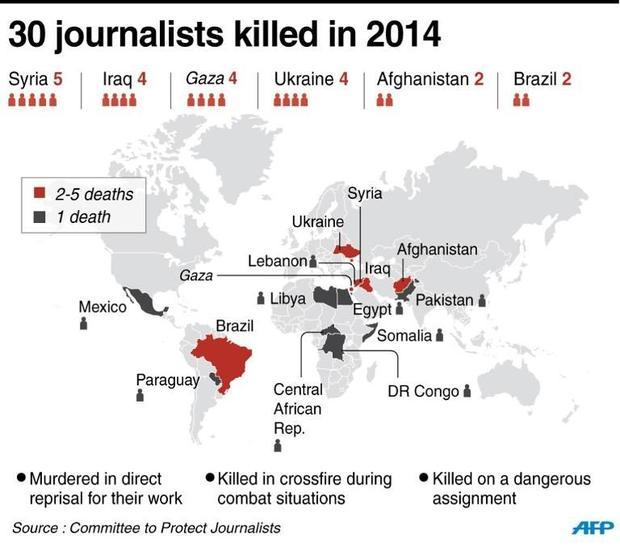