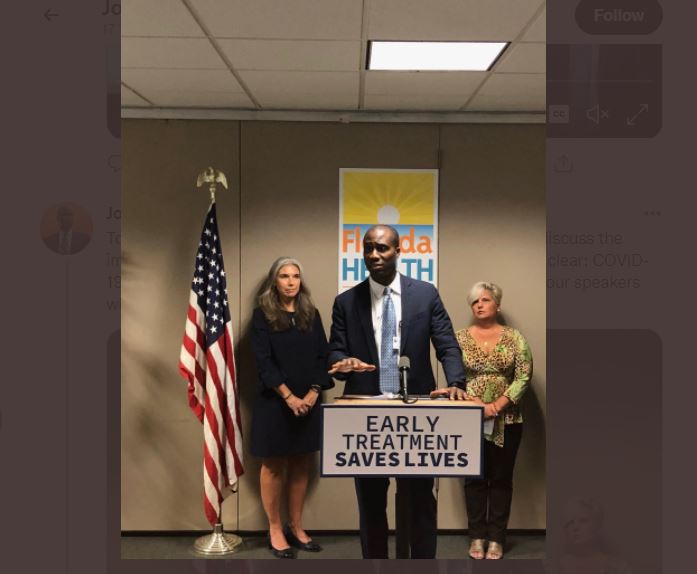 It seems that Surgeon General Joseph Ladapo just can’t keep his name out of the news spotlight. Lapado had asked to meet with Democratic state Sen. Tina Polsky, who represents parts of Broward and Palm Beach counties. But Ladapo showed up at her office, along with two aides, not wearing a mask, and was asked to leave.

Polsky told The Associated Press about the tense exchange with Ladapo that was first reported by the news site Florida Politics.  She said Ladapo and two aides were offered masks and asked to wear them when they arrived for the Wednesday meeting, saying she had a serious condition.

Senator Polsky was diagnosed with breast cancer and at that point had not made her diagnosis public. The U.S. Centers for Disease Control and Prevention (CDC) says cancer patients are at a higher risk to get severely ill from COVID-19 and may not build the same immunity to vaccines.

Ladapo had asked to meet her in Tallahassee as he seeks confirmation in the Senate after being named to the post by Gov. Ron DeSantis last month, according to the Associated Press.

“It was so shocking to me that he treated me in this manner,” Polsky said. “If he is a surgeon general for the next several years, I am really concerned about a future public health emergency and not being able to rely on him for necessary guidance and proper scientific leadership.”

Senate President Wilton Simpson late Saturday sharply criticized the incident and Lapado’s handling of it. Simpson sent a memo to all members and Senate staff calling the incident “disappointing” and said that “it shouldn’t take a cancer diagnosis for people to respect each other’s level of comfort with social interactions during a pandemic.”

All this latest political drama in the Sunshine State comes just two days after Governor Ron DeSantis surprised the legislature when he publicly said he was calling a Special Session to pass laws aimed at blunting vaccine mandates pushed by either local governments or private businesses.

The memo may also suggest that Ladapo, who was appointed to his post in late September, may run into trouble as he seeks confirmation with the Senate during the upcoming session. This will only add to the public distrust already brewing against the vaccine skeptic.

It appears that Ladapo is not only outright questioning the coronavirus vaccines – but he is spreading disinformation about them. During a news conference Thursday, Ladapo made a number of shocking claims out of line with leading public health guidance and scientific claims about the vaccine. Some of his outrageous remarks just have to be quoted.

“I mean, you hear these stories, people telling you what’s been happening in their lives — nurses, pregnant women who are being forced to sort of put something in their bodies that we don’t know all there is to know about yet. No matter what people on TV tell you, it’s not true. We’re going to learn more about the safety of these vaccines, right?

You remember when people were telling you that, you know, that these vaccines would stop transmission and the rates of protection were greater than 90 percent? Well, guess what? Here we are about 10 months afterward. And we’re finding that the data are showing that in some of these vaccines, the protection from infection is less than 40 percent. And even less than that, for some of them.“

However, besides this guy being an outright science denier and liar and DeSantis stooge, I was shocked to find out Lapado will be making $362,000 a year – his combined pay from the Department of Health and the University of Florida, where he is a professor of general internal medicine, according to the Tallassee Democrat.

That is a $123,000 bump over that of his more experienced predecessor, Scott Rivkees, during his tenure. The position also holds the titles of surgeon general and state health officer.

I can only hope and have faith that Florida voters haven’t been so brain-washed and fed so much garbage that they are totally without any good sense, because they, themselves have become the only thing left standing between Democracy and anarchy.