Late last week the White House held a screening of the HBO/Vice documentary “Fixing the System,” and in introducing the film, he acknowledge something that politicians at the national level generally don’t discuss: There’s relatively little that the federal government can do to shrink the country’s enormous prison population, Slate notes.

Obama is the first sitting president in U.S. history to visit a federal prison, Vice News notes. The president met with six inmates at the El Reno Federal Correctional Institution, a medium-security prison for male offenders in Oklahoma. He wanted to hear their stories.

He praised the bipartisan coalition that has sprung up around criminal justice reform in the past several years, but then informed them of the cold, hard reality regarding how much the numerous pieces of national legislation floated by lawmakers in Washington could actually accomplish.

To make any sort of significant impact, “we need state’s attorneys and local prosecutors and sheriffs and [police] departments all across this country to internalize these issues as well, because the federal system is a small portion of our overall criminal justice system, and it’s not something that I can direct by fiat to change,” he said.

In other words, officials in the federal, state, and local level need to be on board.

Numbers released last week by the Department of Justice Bureau of Justice Statistics (BJS) tell the story. The federal system holds only 13 percent of the 1.56 million people who are doing time in American prisons. Previously, the BJS reported that local jails housed an additional 744,600.

Most notably, Obama also placed emphasis on prosecutors, whose role in incarcerating people for long periods of time is not nearly discussed as often as it should be.

Surprisingly, in order to bring about prison reform, we have to re-examine what we think we know.

We’ve heard time and again about how releasing non-violent offenders who were jailed on drug-related charges will drop the swelling prison population. We’ve heard that shortening their sentences will lessen the population.

Before we get into that, it’s worth noting that the number of state and federal inmates has been dropping…ever so slowly for three years straight, beginning in 2010. To begin with, the all-time high was 1.62 million in 2009. By 2012, it had dropped to about 1.57 million, Slate says.

The yearly change shows a slight but steady decline in the prison population starting in 2009, with a bump in 2013 when the total number climbed by about 6,600. 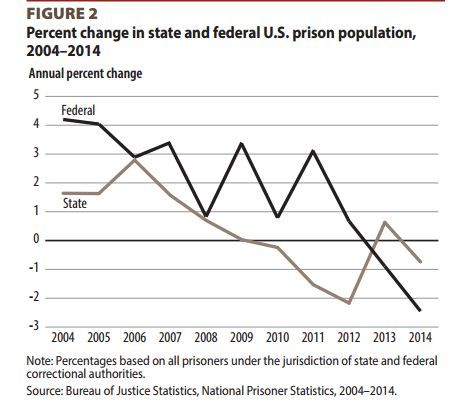 The sad news about this however, is that the 15,400-person decrease in the overall prison population is the second largest annual drop the U.S. has seen in 35 years, Slate notes. The biggest drop occurred between 2011 and 2012, when California enacted a policy that transferred thousands of state prisoners to local jails.

According to the BJS’s report, one-third of the decrease comes from the federal prison system — which now houses around 13 percent of the country’s prisoners since the number shrank by about 5,300 inmates in 2014. The states house the vast majority of prisoners. Here, the collective prison population fell by about 10,000. Slate notes that at last count, local jails housed an additional 744,600 people and aren’t included in the BJS’s calculations. Mississippi saw the largest drop — by about 14.5 percent, due to “new policies that encourage the supervision of nonviolent offenders in the community instead of in prison,” the report states.

While we keep hearing from politicians who are pushing criminal justice reform say that most people are incarcerated for non-violent offenses, the BJS’s statistics contradict that. Some 53.2 percent of the people serving time in state prisons were there due to violent offenses, while only 15.7 percent were there because of non-violent drug-related crimes.

And while the incarceration rate has fallen slightly among U.S. adults — from 621 per 100,000 to 612, it still hands us the unpleasant reality that this country imprisons more of its people than any other developed nation in the world.

Even in the unlikely event that this downward trend continues, it could take nearly 90 years for the country’s prison population to get down to where it was in 1980, Slate notes.

The percentage of drug offenders in the prison population peaked at 22 percent in 1990, and then steadily declined, John Pfaff, a professor at Fordham Law School told Slate.

“So even when the percentage of drug offenders among the state prison population was at its peak, about four out of every five people were there for a non-drug offense,” he said.

Also, even though it’s true that legislators have passed many longer sentences, if you take a look at the time served by inmates, it doesn’t appear to have changed very much.

“We have good data going back approximately 20 years or so, and at least in northern and northwestern states where we have better data, about half of all prisoners who get admitted in a given year only spend about two or three years in prison,” he added. “And only about 10 percent serve more than about seven or eight years in prison.”

“These laws look incredibly punitive — 25 years for a class B felony — but you just don’t see people serving that amount of time.”

So then Slate asked, if the prison boom isn’t the result of the drug war or longer prison sentences, then what is the cause?

The scale of the crime boom that took place was drastic. Between 1960 and 1991, violent crime rose by 400 percent, and property crime rose by 200 percent.

“Figuring out how much of prison growth can be attributed to the crime boom is actually statistically quite difficult, but the best estimate that’s out there — which is not a perfect estimate, but it’s the best we have — suggests that about half of prison growth during that period was due to rising crime.”

“Clearly other stuff mattered, but rising crime played a very big role during the first phase,” he said.

It might have looked as if police became more efficient and were arresting more people by using new technologies and approaches, but “we don’t actually see that,” he said. In general, arrests drop along with the crime rate. So the number of arrests has dropped. It could have been that people were being locked up longer, “but like I said, it’s not that.”

So then, what is going on?

“Defendants who they would not have filed felony charges against before, they are now charging with felonies,” Pfaff said. “I can’t tell you why they’re doing that. No one’s really got an answer to that yet. But it does seem that the number of felony cases filed shoots up very strongly, even as the number of arrests goes down.”

It may be that district attorneys have political motivations; they may be hoping to become attorney general or governor, but Pfaff says there’s no clear data on that.

“We’re only just starting to look at this question. But that strikes me as a possible story,” he said. “What might have happened is the crime boom made being a prosecutor more of a launch-pad position — it elevated the status of prosecutors, and perhaps elevated their political ambitions, and they remained tough on crime even as crime started going down.”

The rise of the prison industry

Like a malignant cancer, the prison industry complex is becoming one of the fastest-growing industries in the U.S., and it’s investors are on Wall Street,The Centre for Research on Globalization reports.

For the wealthy who are profiting off of the misery of others, there’s plenty of benefits to be had. There’s no having to worry about strikes or paying unemployment insurance, no vacations or comp time. The workers are always full time, never late or absent due to family problems, and, if they don’t like the 25 cent an hour pay or refuse to work, they are locked up in isolation cells.

If you add in private prisons to the totals mentioned above, it adds up to nearly two million inmates nationwide. California Prison Focus adds that “no other society in human history has imprisoned so many of its own citizens.” The U.S. has actually even locked up a half million more people than China, which has a population that’s five times larger than the U.S. Statistics show that the U.S. incarcerates 25 percent of the world’s prison population, but has only five percent of the world’s people, the Centre reports.

What’s the most disturbing issue here?

Wackenhut and the Correctional Corporation of America (CCA) are the two largest corporations in the prison industrial complex, the Centre notes. No doubt their CEOs are anticipating this expansion.

But private prisons really came into their own when a law signed by President Bill Clinton in 1996 went into effect, ending court supervision and decisions, it caused overcrowding and violent, dangerous conditions in federal prisons. When that happened private prison corporations in Texas began contacting other states where prisons were overcrowded, offering “rent-a-cell” services in the CCA prisons located in small towns near Texas. Rent-a-cell salesmen earned a commission of $2.50 to $5.50 per day per bed. The county receives $1.50 per prisoner.

So who’s investing in this? Upwards of 37 states have made it legal for private corporations to contract prison labor, and the companies doing this are the cream of the corporate crop: IBM, Boeing, Motorola, Microsoft, AT&T, Wireless, Texas Instrument, Dell, Compaq, Honeywell, Hewlett-Packard, Nortel, Lucent Technologies, 3Com, Intel, Northern Telecom, TWA, Nordstrom’s, Revlon, Macy’s, Pierre Cardin, Target Stores, and the list goes on and on.

With all of this, is it any wonder why the prison population is huge? Not only do we have to try to work out a solution through the federal and state level, but we now have to work one out on the corporate level as well. So this is why I believe this problem will not go away soon, and it’s heartbreaking that once again, so many people must suffer for the few who will prosper.

The system is likely to stay broken for a long time.

Note: Fixing the System airs on Sept. 27 on HBO