The octopus genome with its complex DNA code has finally been cracked. Scientists are eager to answer questions about these creatures’ unusual physiology and incredible intelligence.

Scientists sequenced the DNA of a California two-spot octopus, which gets its name from the false eyespots under each of the animal’s real eyes.

While it will take time to unravel what the octopus genome means, the scientists already have interesting results.

A big discovery was that the octopus contains genes that were once thought to be only in vertebrates. These genes, known as protocadherin genes, create a complex neural network found in animals with substantial processing power, explains Scientific American. Humans and octopi share these genes in common as well as camera-like eyes and large brains.

The scientists are looking at how the octopus with its thousands of suckers can taste and their unusual camouflage system. An octopus can change colors in a blink of the eye.

What’s incredible about the octopus is that its neural circuitry will reveal information that biologists, engineers, and physicians can use. Understanding the octopus offers information beyond this amazing animal.

“This is such an exciting paper and a really significant step forward,” researcher Annie Lindgren (not involved in the study) told Scientific American. “Having a whole genome is like suddenly getting a key to the biggest library in the world that previously you could only look into by peeking through partially blocked windows.”

The results of the study were published Thursday in the journal Nature. The article is open access.

DNA is like a biological programming language, which is used by every living thing like plants, animals, and even viruses. Sequencing the human genome’s 3 billion base pairs was completed in 2003. 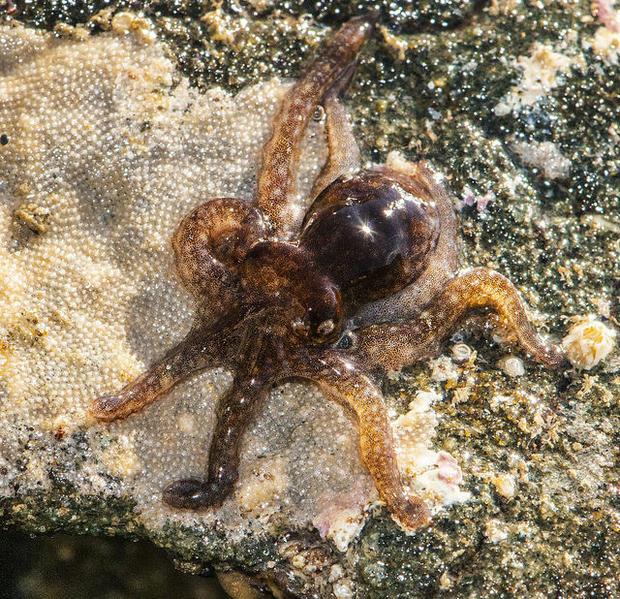 Two-Spot Octopus (Octopus bimaculoides)
One of the dark spots is visible under the eye of this octopus, which helps in identification.
Jerry Kirkhart

Since then, so many living things have had their genomic code analyzed, but the complex octopus genome still was left unexplored. More than two dozen scientists banded together and published a white paper in 2012 arguing that sequencing the octopus would have great scientific, commercial and educational uses. Further, they said the public wants to understand these creatures:

People are fascinated by cephalopods, from Nautilus to the octopus to the giant squid. The coupling of genomics to cephalopod biology represents a fusion of two areas of great interest and excitement for the public.

Evidence of octopus intelligence has been observed in how the creatures can use tools and solve puzzles like Paul the octopus who was thought to be psychic in predicting World Cup games.

The two-spot octopus is liked by people because of their friendly temperaments and are sometimes kept in aquariums. Despite their intelligence that has parallels to humans, these creatures do not live long. They only live from two to five years.