The outcome of the U.S. election doesn’t change the political landscape too sharply. Obama is once again president, and the House and Senate aren’t changing their colours.

The all-important Florida results are almost in, with Obama leading 50 percent to Romney’s 49 percent, with 96 percent reporting.

CNN is livestreaming the celebration at Obama headquarters.

Washington Post reports on Obama’s early victories tonight: “Obama won his home state of Illinois as well as Massachusetts, where Romney was governor and the place he still calls home. Maryland and the District of Columbia were put in Obama’s column as soon as polls there closed.” 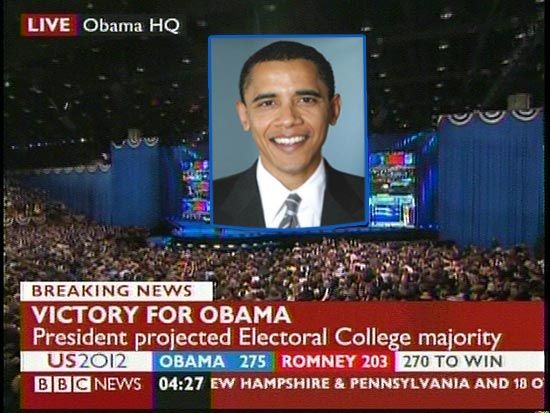 Romney conceded the contest around 12:55 Wednesday morning in front of a subdued crowd of supporters in Boston, WaPo notes in a separate article. “I pray the president will be successful in guiding our nation,” Romney said.