Obama and Vice-President Joe Biden announced major proposals to help curb gun violence in the country. They said they would introduce legislation by next week that includes a ban on assault weapons, limits on high-capacity magazines, universal background checks for gun purchases and new gun trafficking laws to crack down on the proliferation of weapons across the country.

On banning military-style assault guns, Obama said, “These weapons designed for theatre of war have no place in a movie theatre,” referring to the Aurora, Colorado shooting.

The White House offered the video feed of the announcement live.

Obama also proposed universal background checks for anyone buying a gun in America. “There is no reason we can’t do this,” the President added.

“We should have a system where everybody has to get a background check,” said a senior administration official, according to the Washington Post. “The best analogy that experts talked to us about in our meetings is that it wouldn’t make any sense at the airports to have two lanes — one where if you go to a licensed dealer you go through the metal detector and if you go to a private sale there’s no metal detector at all. This is an attempt to get everybody through the system.”

The president promised to fight tooth-and-nail for the new gun laws, saying that the country’s leaders must forget their partisan beliefs and unite to approve these proposals.

“In the days ahead, I intend to use whatever weight this office holds to make them a reality,” he said. “If there’s even one life that can be saved, then we’ve got an obligation to try.” 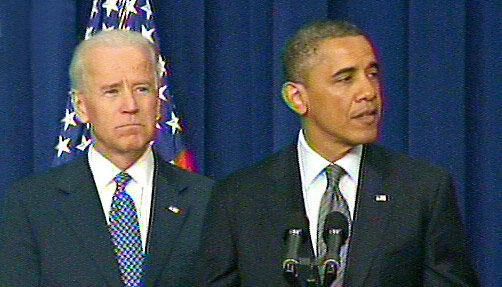 Reuters says Obama includes 23 steps he hopes to will take effect immediately without congressional approval. He signed the executive orders for these items today; These include improvements in the existing system for background checks, lifting the ban on federal research into gun violence, putting more counselors and “resource officers” in schools and improved access to mental health services.

At the announcement, Obama and Biden were surrounded by children who wrote letters to the White House in the wake of the Sandy Hook shooting tragedy.

The proposals come from a lengthy review led by Vice President Joe Biden, who on orders from Obama met with advocates on both sides, including representatives from the weapons and entertainment industries, as Reuters reports.