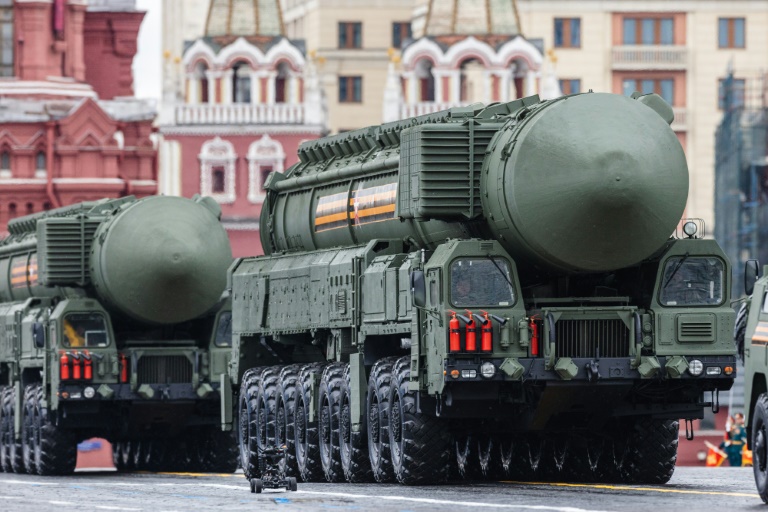 As nuclear nations commit to renewing and sometimes expanding their arsenals, a decline seen since the early 1990s seems to have stalled, with some signs of a numerical increase, researchers said Monday

“The reduction of nuclear arsenals that we have gotten used to since the end of the Cold War appears to be levelling out,” Hans Kristensen, associate senior fellow at SIPRI’s Nuclear Disarmament, Arms Control and Non-proliferation Programme, told AFP.

The amount of nukes among the nine nuclear-armed states — the US, Russia, the UK, France, China, India, Pakistan, Israel and North Korea — totalled 13,080 at the start of 2021, a slight decrease from 13,400 a year earlier, the Stockholm International Peace Research Institute (SIPRI) estimated.

However, this includes retired warheads waiting to be dismantled, and without them the combined military stockpile of nuclear arms rose from 9,380 to 9,620.

Meanwhile, the number of nuclear weapons deployed with operational forces increased from 3,720 to 3,825, the report said.

Of these, some 2,000 were kept in a “kept in a state of high operational alert,” meaning for launch in a matter of minutes.

“We’re seeing very significant nuclear modernisation programmes all around the world and in all the nuclear weapons states,” Kristensen said.

He added that nuclear states also seem to be raising “the importance they attribute to the nuclear weapons in their military strategies.”

This change can be observed in both Russia and the United States, which together possess over 90 percent of the world’s nuclear weapons, Kristensen said, stressing it was too early to say if the new US administration under President Joe Biden would deviate from the strategy under his predecessor Donald Trump.

“I think that the Biden administration is signalling quite clearly that it is going to continue the overwhelming main thrust of the nuclear modernisation programme that was underway during the Trump years,” the researcher said, noting the programme was started under Barack Obama.

The US and Russia continued to dismantle retired warheads, but both had about 50 more in “operational deployment” at the start of 2021 than a year earlier.

At the same time, the “New START” nuclear arms reduction treaty between the US and Russia was extended for another five years in early 2021, albeit at the last minute.

The extension was important to “create stability” and “it was doubly important” as other treaties — such as the INF treaty, banning intermediate and shorter range land based missiles — have expired.

The report authors  said “all the other seven nuclear-armed states are also either developing or deploying new weapon systems or have announced their intention to do so.”

The International Campaign to Abolish Nuclear Weapons (ICAN) this month reported that nuclear nations increased spending on their arsenals by $1.4 billion (1.2 billon euros) to $72 billion in 2020, even as the pandemic raged.

In August, the parties to the Non-Proliferation Treaty (NPT) — or most countries in the world — are set to meet in New York for a review held every five years.

Under the treaty nuclear powers commit to “pursue negotiations in good faith” both on the “cessation of the nuclear arms race” and “nuclear disarmament”, but as many are renewing their arsenals, other parties may question their commitment.

“The member states of that treaty will rightly be able to ask: ‘Are you truly in ‘compliance with this treaty?’,” Kristensen said.

“‘If you’re not, why should we continue to be members to the treaty’.”

While we might see a reversal of the trend since the end of the Cold War, Kristensen cautioned there were a lot of uncertainties about where future developments might lead.

“Is it just that the reduction phase is over, or are we even going to see an increase because countries might want more weapons,” he said, adding that China’s growing stockpile may also affect US and Russian readiness to disarm.

The situation during the Cold War was much more “intense,” added Kristensen.