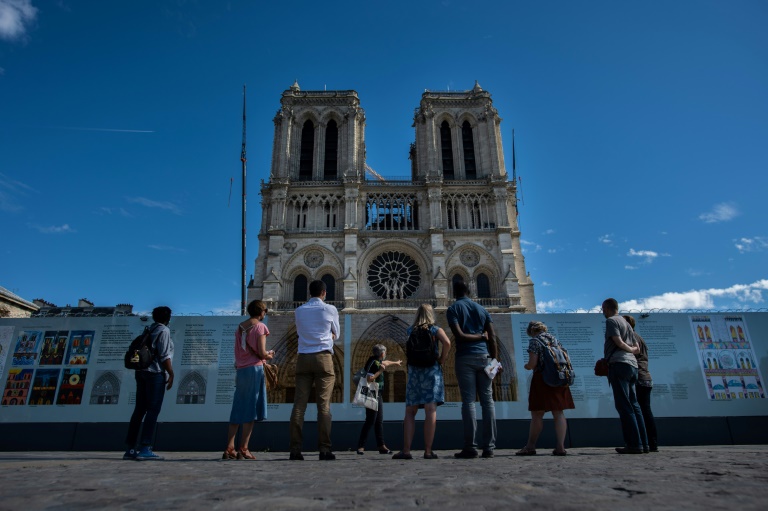 The Catholic diocese of Paris said Monday it was seeking up to six million euros to restore and modernise the interior of Notre-Dame cathedral, nearly destroyed by a massive fire two years ago.

The diocese launched a fundraising drive looking for five to six million euros ($6.1-$7.3 million) to complete the work.

President Emmanuel Macron has vowed to complete the monument’s restoration for 2024, and more than 800 million euros has already been received or pledged from private and corporate donors for the painstaking rebuild of the 13th-century gothic masterpiece.

While the spire collapsed and much of the roof was destroyed on the evening of April 15, 2019, the efforts of firefighters ensured that the medieval edifice survived the night.

But a law passed shortly after the blaze stipulated that funds raised via the public subscription covered only the structural restoration and conservation of the historic landmark, which technically is owned by the French state.

Archbishop of Paris Michel Aupetit said in a statement that the goal was “to bring the cathedral into the 21st century, while ensuring the preservation of its identity in the spirit of the Christian tradition”.

The funds would be used to update the tour layout for the six million visitors each year as well as new furniture and lighting and sound systems.

Several artists have already said they will donate their time and expertise for new artworks, and sponsors are being sought via the Notre-Dame Foundation as well as the American nonprofit Friends of Notre-Dame de Paris.

Following several months of works focussed on consolidating the cathedral’s structure, actual restoration work is set to begin in late 2021.

Notre-Dame is to reopen for worship in April 2024, in time for the Paris-hosted Summer Olympics.

But restoration work will continue beyond that date, according to Jean-Louis Georgelin, the former general hand-picked by Macron to lead the project.