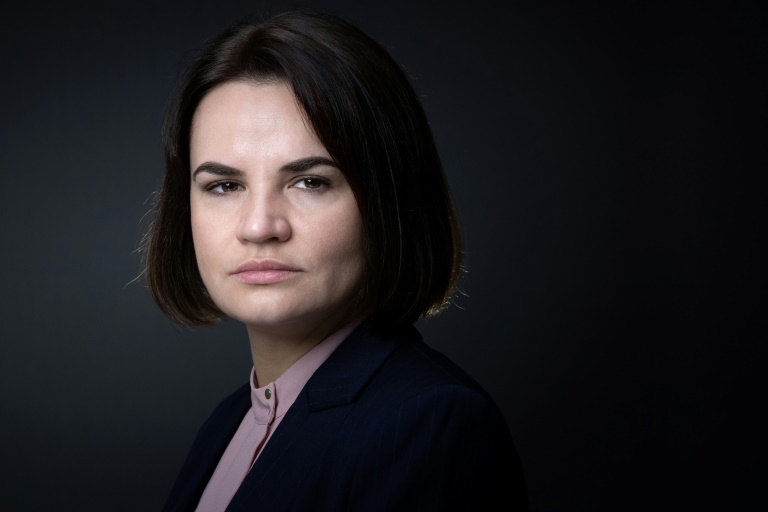 There is “no way out” for Belarusian President Alexander Lukashenko over a year after disputed elections, the exiled opposition leader said on Friday, urging France to use its ties with Russia to increase pressure on the authoritarian leader.

Svetlana Tikhanovskaya, who along with much of the international community believes she was the true winner of last summer’s polls, told Agence France-Presse in an interview that world powers and the Belarusian people had to keep pressing the regime for free and fair elections.

She expressed satisfaction with her visit to France this week that ends on Saturday, saying there was “no disappointment” that there had been no meeting with French President Emmanuel Macron to follow a first meeting in Lithuania last year.

Tikhanovskaya, who met French Foreign Minister Jean-Yves Le Drian earlier this week, said France and other powers should act as mediators to agree new elections that she said would sweep Lukashenko from power.

“I am sure we will be able to bring our country peacefully to new elections, but to make this possible we have to be consistent in the struggle and use every opportunity, consistently fighting and resisting,” she said.

“The support of the international community, creating multiple point of pressure on the regime, will make the regime understand there will be no way out of this situation and all they can do is talk to the Belarusian people.”

She said that France was particularly important given it has a working relationship with Russia. Analysts say Moscow’s support is crucial for Lukashenko’s hold on power.

“France has a good relationship with Russia and… can be a mediator in this process. France can find ways to communicate the countries still supporting the regime.”

While sanctions agreed by the EU were working, she said, Lukashenko’s only aim “is to stay in power and continue to harass the Belarusian people”.

“What we should avoid is stalemate in Belarus, we need a dynamic.”

But she predicted: “For sure the regime will collapse. It is impossible to lead a country where you are not respected.”

Tikhanovskaya, who is now based in Lithuania, was forced to leave Belarus in the wake of the elections where she emerged as the surprise figurehead of the opposition following the disqualification and imprisonment of her blogger husband Sergei Tikhanovsky.

She cannot even talk to her imprisoned husband as “in Belarus relatives cannot communicate with prisoners, only through a lawyer”.

She described her husband as an “extremely strong person” who “will never betray his values or sign a letter asking for a pardon from Lukashenko”.

She applauded the hundreds of activists, journalists and politicians who rights groups say are held as political prisoners in Belarus, such as fellow protest leader Maria Kolesnikova who was sentenced to 11 years in prison earlier this month.

“They inspire us even from behind bars and motivate us not to give up,” Tikhanovskaya said.

But while Tikhanovskaya said she is sure she will one day return to Belarus, she made clear she had no intention of following the example of Russian opposition leader Alexei Navalny who was immediately jailed on his return to Russia from Germany.

“It was his political decision and I absolutely understand this,” she said of Navalny.

“But in my situation I would become the next political prisoner and I would not be able to do anything behind bars. I would ruin everything that has been built up for the past year. Nobody would gain — and the regime would be happy.”