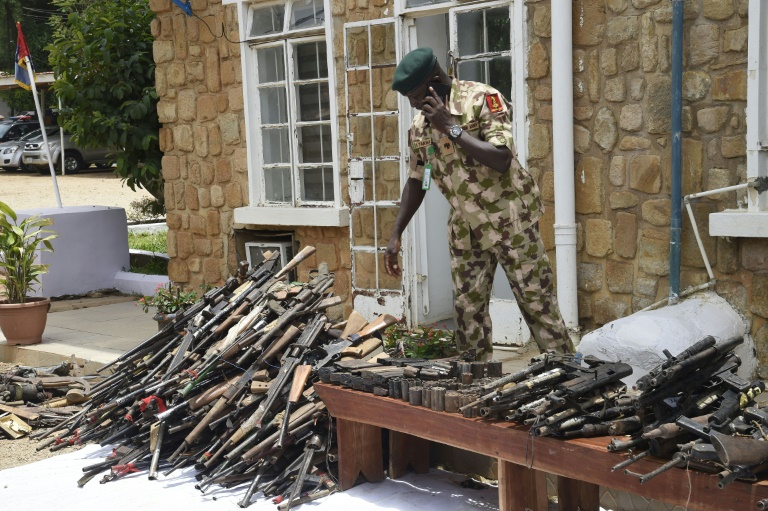 Authorities in northwest Nigeria’s Zamfara state have suspended a traditional chief after he conferred a royal title on a notorious gang leader wanted for deadly raids and kidnappings.

Parts of Nigeria’s northwest and central regions have been hit by heavily armed criminal gangs known as bandits, who loot villages and abduct and kill residents.

The central government has declared bandit militias to be terrorists but the gangs continue to defy the security forces with attacks and kidnappings.

Nigeria’s traditional chiefs and emirs have no political authority, but are widely respected in their areas as custodians of local tradition and Islam.

The ceremony at the emir’s palace came after an apparent peace deal with Aleru, highlighting the struggle rural communities face in bandit-infested regions.

Hundreds of Aleru’s comrades emerged from their bush hideouts on motorbikes to attend the ceremony, a palace source told AFP.

The royal title has sparked outrage.

“Crowning a murderer is dancing on the corpses of the victims,” Senator Shehu Sani, a rights activist from the northwest, said in a tweet.

On Sunday Zamfara state government announced that the emir would be suspended.

“Zamfara State Government has dissociated itself from the alleged turbaning of a Sarkin Fulani by the Emir of Birnin Yandoto of Tsafe Local Government Area,” the government said in a statement that did not mention Aleru.

“State Executive Governor, Bello Mohammed Matawalle has directed for suspension of the Emir with immediate effect.”

But a spokesman for the emir defended his actions, saying it was done in good faith to ensure peace in his region, which had suffered “unimaginable horror” from bandit attacks.

“The title conferred on Aleru was to strengthen the existing peace to which he has played a central role,” Magaji Lawwali said.

“Before the peace agreement, we were under siege and our people were being killed and abducted for ransom on daily basis, but all these have stopped.”

“He is held in reverence by his men for his ruthlessness and is behind attacks in parts of Zamfara and Katsina state,” one said.

Bandit attacks have continued despite military operations across the vast Rugu forest, which straddles the northwestern states of Zamfara, Katsina, Kaduna as well as central Niger state.

Governments in the affected states have resorted to various strategies to try to end the violence, including amnesties, outlawing ransom payments and telecom blackouts to break communications between gangs.

Authorities are also concerned about the growing links between bandits and jihadist groups from the northeast who are making inroads in the northwest-central region.

“People outside have no idea what we are going through and why we support giving Aleru the title,” said Tsafe resident Attahiru Yahaya.

“We live at the mercy of bandits who are well-armed and ruthless, attacking our communities at will without any intervention from the government.”

Yahaya said that since the peace agreement a few months ago, Aleru and his men had not conducted any attacks or kidnappings.

“We will support any move to maintain this,” he said.

In this article:Bandits, Nigeria, Unrest