The National Hurricane Center is watching a large area of showers and thunderstorms located along a sharp surface trough from near eastern Cuba through the southeastern Bahamas into the southwestern Atlantic. According to the NHC’s 2:00 p.m. advisory, conditions are forecast to become more favorable for development later in the week.

The tropical disturbance, designated as Invest 95L, has at least a 60 percent chance of developing into at least a tropical depression, hurricane forecasters said. However, regardless of its development, locally heavy rain is possible in parts of Florida and the Deep South. 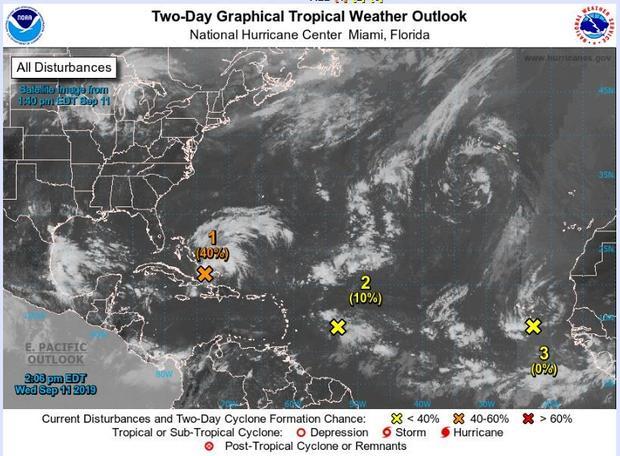 NHC
The system is expected to be drawn toward the northwest between a high-pressure system near Bermuda and an upper-level low-pressure system that will be to its west. Winds aloft are spreading apart over the disturbance, supporting the growth and persistence of thunderstorms, notes UNC-Charlotte graduate student Eric Webb.

Should the tropical disturbance develop into a tropical storm, it would be named Humberto. At the present time, shearing winds are keeping the system from becoming better organized. By Friday, as the system nears Florida, conditions will become more favorable for development. The Gulf of Mexico will also be quite favorable to allow the system to either develop or gain some strength this weekend.