In a study published in December 2015, the U.S. Department of Agriculture (USDA) verified that genetically engineered alfalfa had gone wild in our western states, in a very big way.

The study lends confirmation to and explains the number of transgenic contamination episodes over the past few years that have cost American alfalfa farmers and exporters millions of dollars. More telling is that the study exposes the failure of the USDA’s “coexistence” policy, says EcoWatch.

The USDA’s “Coexistence” fairytale
The USDA has long maintained that genetically engineered crops can coexist with nor-GMO and organic crops. Yet this very issue has been the basis of a number of complaints filed over GE alfalfa contaminating non-GMO fields. The USDA has long maintained that if GMO-farmers and non-GMO farmers “just sorted things out,” using good management practices, transgenes would be confined to GE crops and the fields where they are planted.

In 2013, the federal agency, in keeping with its belief in “coexistence” of these crops, rejected a Washington state farmer’s complaint about his alfalfa being rejected for export because of the presence of the genetically modified trait that made it unacceptable in Asian countries. The USDA said the Washington farmer’s non-GMO alfalfa crop should be addressed by the marketplace and not the government, reported Reuters.

Depending on which side of the fence people tend to lean, anti-GMOers are saying, “See, we told ya so,” and proponents of GMO crops are saying a little transgenetic contamination is to be expected. However, the USDA study found that in sites tested in California, Idaho and Washington state, over one-quarter, 27 percent of them, contained transgenic alfalfa. 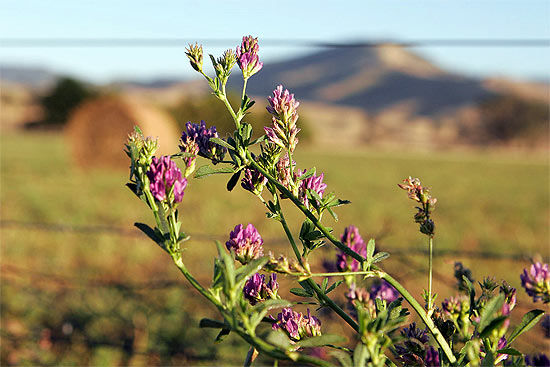 A photo of Alfalfa — a flowering plant in the pea family Fabaceae cultivated as an important forage crop. In the UK, Australia and New Zealand it is known as lucerne and as lucerne grass in south Asia.
Wikipedia / Fir0002

It is all about the bees
Alfalfa is a perennial grass, unlike other GMO crops. The study found that the Roundup-Ready gene, a protein called CP4 EPSPS that conveys resistance to glyphosate, was being spread by bees, doing what they naturally do, cross-pollinating alfalfa fields sometimes separated by several miles.

The USDA’s results suggested that “transgenic plants could spread transgenes to neighboring feral plants and potentially to neighboring non-GE fields.” Now the USDA didn’t test this possibility, but there is no question that non-GE alfalfa has been contaminated, and probably on many occasions.

But there is more to this story. We go back to 2005 when the USDA first approved GE Roundup Ready alfalfa for use. About one percent of national alfalfa acreage was GE alfalfa by 2006. In 2007, a federal court put a halt to GE alfalfa planting but allowed what had already been planted to remain in the ground. Being a perennial, an alfalfa field can produce for about five years.

The USDA re-approved the GE Roundup-Ready alfalfa for planting in 2011. The study was done just a few months after the USDA gave its re-approval, meaning all of the feral GE alfalfa the researchers detected arose from the small number of fields planted in 2005 and 2006.

Monsanto says that now, over 30 percent of alfalfa seeds sold are GE Roundup-Ready seeds. This means that more than likely, there are more feral alfalfa stands than the USDA study would suggest.

While the USDA says more studies on transgenic contamination are needed, American farmers don’t need further data on something they have known for over six years. Regulatory action is needed or we will see all our alfalfa crops contaminated with GE genes. The USDA though continues to bow before the biotech giants and has failed to enact a single restriction on GE crop growers.