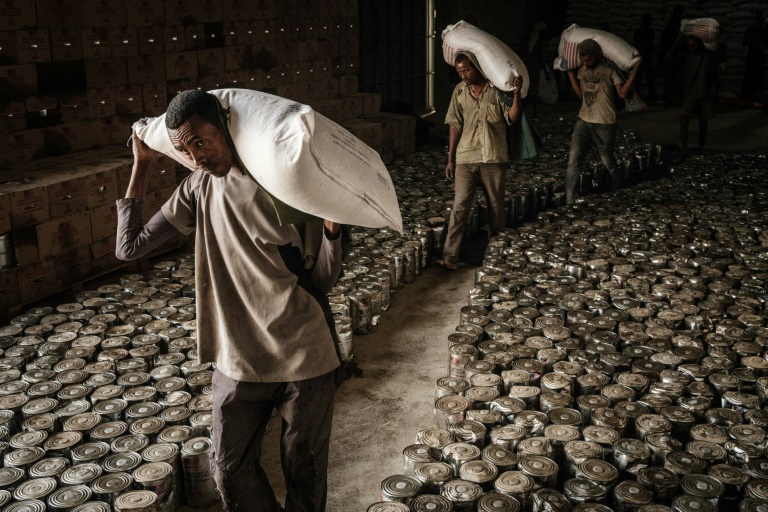 New aid convoys were in or on their way to Ethiopia’s conflict-ravaged Tigray region Thursday, humanitarian agencies said, the latest deliveries to take advantage of a truce between the country’s warring sides.

The 17-month conflict between government forces and the Tigray People’s Liberation Front (TPLF) has created a humanitarian crisis in northern Ethiopia and sparked famine fears in Tigray, which has for many months been under what the UN describes as a de facto blockade.

Aid deliveries by road to the stricken region of six million people were cut off in mid-December and only limited medical and other supplies could be flown in.

But the first new convoys sent by the UN’s World Food Programme and the International Committee of the Red Cross finally arrived at the beginning of April, about a week after the truce was declared.

The ICRC said on Twitter on Thursday that another shipment carrying food and medical supplies, along with household items, had arrived in Tigray’s capital Mekele.

“The convoy also carried essential equipment for the orthopaedic rehabilitation centre,” it said.

The WFP also announced that its second convoy was on its way to Mekele.

“47 trucks with food, nutrition and other life-saving supplies Plus three fuel tankers — fundamental to deliver these items to communities in #Tigray,” it tweeted.

The convoy had encountered a “smooth journey so far with support from all authorities”, it added, as the truce between Prime Minister Abiy Ahmed’s government and the TPLF continues to hold, allowing aid to reach the battered region.

The new deliveries coincide with a trip to Ethiopia this week by the US special envoy for the Horn of Africa David Satterfield, as Washington steps up diplomatic pressure to allow aid to flow to Tigray.

In a statement Thursday, the Ethiopian government said it “reaffirms its commitment to work closely with the international community and other stakeholders to ensure proper access to humanitarian aid”.

“The government also urges the international community to put pressure on Tigray militants to withdraw fully from the areas they occupy in the Afar and Amhara regions to pave the way for a smooth aid delivery for those in need.”

The TPLF’s withdrawal from the two regions neighbouring Tigray was a key condition set by the government when it announced a humanitarian truce on March 24.

The rebels in turn urged the Ethiopian authorities “to go beyond empty promises and take concrete steps to facilitate unfettered humanitarian access” to Tigray.

Earlier this week, the TPLF announced the departure of its troops from Erebti, one of the areas they occupy in Afar.

But Ethiopian foreign ministry spokesman Dina Mufti said at a press conference Thursday the reports that Tigrayan forces have moved out of Afar “need verification”.

The government and the rebels have long accused each other of blocking aid to Tigray, where people are living without basic services such as electricity, internet, telecommunications or banking.

The war has killed untold numbers of people, displaced more than two million and left more than nine million in need of food aid, according to the UN.

The conflict erupted in November 2020 when Nobel Peace laureate Abiy sent troops into Tigray to topple the TPLF, the region’s former ruling party, saying the move came in response to rebel attacks on army camps.

It followed months of seething tensions between the government and the TPLF, which dominated politics in Ethiopia for three decades before Abiy came to power in 2018.

In this article:AID, Conflict, Ethiopia