It’s the northern end of Earth’s rotational axis, and its location, along with that of the South Pole, is affecting GPS measurements as well as results from Earth-observing satellites and ground-based observatories, CBC News reports. Keeping track of the pole is of profound importance to scientists.

This research, published in Science Advances, illustrates that the observed directional change in the planet’s wobble stems from mass redistributions that result from ice melting in Greenland and Antarctica, Inverse reports.

It’s pretty normal for the Earth’s poles to shift a bit, and scientists have been keeping records of the Earth’s shifting poles since 1899. In that entire time, the North Pole has moved in the direction of Canada, but over the past two decades, this has changed. Now the pole is slowly making its way towards England. 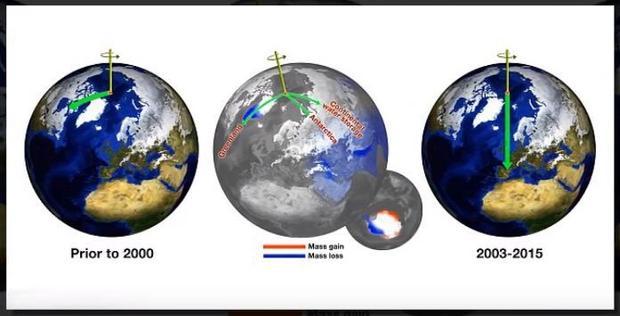 This shows the changing direction of the North Pole.
YouTube screen grab Arguments and Facts

Scientists say the shift is harmless, but is nevertheless still meaningful. While he wasn’t part of the study, Jonathan Overpeck, professor of geosciences at the University of Arizona, noted “this highlights how real and profoundly large an impact humans are having on the planet.”

Greenland has lost an astonishing 600 trillion pounds of ice a year since 2003. This affects the way the Earth wobbles in a way that’s similar to a figure skater lifting one leg while spinning, NASA scientist Eirk Ivins, the study’s co-author told Phys.org.

All of this combines to pull polar motion eastward, Adhikari noted.

The shift averages about 10 centimeters a year — likely not enough to warrant recalculating the planet’s geographic pole. But it’s something later generations may have to consider if things keep changing, Adhikari told National Geographic.

This is an exciting opportunity for the scientists. They can explain what’s actually causing the drift, and this may have some pretty dramatic ramifications for climate science.

The physics behind this are quite complex, meaning that scientists could only guess how this works in the real world, but Adhikari has proposed a way that might explain this complex process. He suggests it’s not just shrinking glaciers that change Earth’s mass distribution — something that some scientists had thought. A lot of mass also gets moved around as land loses liquid water on a large scale, the team found.

Adhikari and Ivins think the rotational pole is shifting towards Europe due to massive losses of water from lakes and aquifers in Eurasia, in the area of the Caspian Sea, and in India. Warmer temperatures have led to more evaporation and less precipitation in many areas, coupled with booming human populations that are sucking up massive amounts of groundwater from reservoirs and wells.

“What we have shown is that melting ice and a pattern of continental water storage are combining to cause a dramatic shift in the direction of the pole,” Adhikari says.

He teased this information out by combining mass distribution models with data from NASA’s Gravity Recovery and Climate Experiment (GRACE), Gizmodo reports.

Obviously, Earth isn’t going to go all topsy-turvy, but other aspects of this finding are worrisome. It shows just how much humans are changing the planet’s physical and geological history. With the weakening of the planet’s jet streams and collapsing ice sheets, Earth is reacting to a warming atmosphere in ways that are considerably less benign.