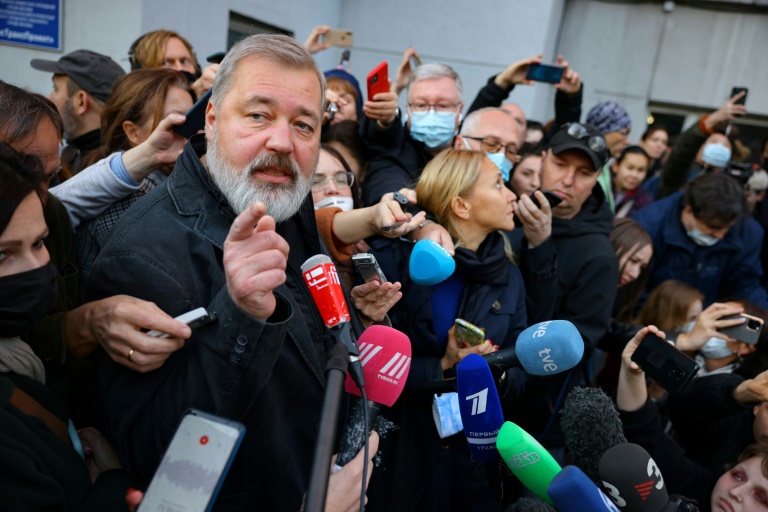 Newspaper Novaya Gazeta, whose editor-in-chief Dmitry Muratov won the Nobel Peace Prize, is a bastion of independent media in Russia with a commitment to free speech that has cost some of its journalists their lives.

Muratov, who was among a group of journalists who founded Novaya Gazeta in 1993 after the fall of the Soviet Union, dedicated the award to the paper’s murdered journalists and jailed Kremlin critic Alexei Navalny.

It came amid a historic crackdown on the opposition and independent media in Russia.

A number of outlets were forced to close this year and several prominent journalists fled the country. Navalny, 45, was jailed in February and his organisations were subsequently outlawed.

Novaya Gazeta has paid a heavy price for its independent stance and investigative coverage.

Since 2000, six of its journalists and contributors have been killed in connection with their work, including top investigative reporter Anna Politkovskaya. Their black-and-white portraits now hang in the newspaper’s offices in central Moscow.

Politkovskaya, a critic of President Vladimir Putin and the Kremlin’s wars in Chechnya, was shot dead on October 7, 2006, in the entrance hall of her apartment building.

In an interview with AFP in March, Muratov said the newspaper’s reporters knew their work put their lives at risk, but that unlike some other Kremlin critics they would not go into exile.

“This newspaper is dangerous for people’s lives,” Muratov said. “We are not going anywhere.”

Grey-bearded and round-faced, Muratov has been one of Russia’s most prominent independent journalists for decades.

He and Novaya Gazeta’s other founders were inspired by the newfound freedoms that followed the collapse of the Soviet Union in 1991.

A key early supporter was former Soviet leader Mikhail Gorbachev, who donated part of his 1990 Nobel Peace Prize money to buy the new publication its first computers — one of them still on display in their office.

The heady optimism of those early days is long gone. In the years since Putin came to power in 1999, critical voices have been increasingly pushed to the sidelines.

Novaya Gazeta has become one of the few remaining independent voices in a grey media landscape.

Kremlin critics say authorities are waging a campaign against independent and critical media, with many branded “foreign agents” and others forced to shut down.

Novaya Gazeta is one of the few prominent independent outlets that still do not carry the “foreign agent” tag, a status reminiscent of the Soviet-era term “enemy of the people”.

While the Kremlin congratulated Muratov on winning the prize, Putin warned the editor not to use it as “a shield” to break Russian laws.

Novaya Gazeta, which is published three times per week, focuses on deep-dive investigative reports into corruption and rights abuses, and its journalists have long faced intimidation and violence.

In 2018, a funeral wreath and a severed ram’s head were delivered to the newspaper’s offices with a note addressed to one of its reporters who covered the shadowy Wagner mercenary group operating in the Middle East and Africa.

The investigations had shed light on Wagner’s operations abroad and on its alleged ties to a Kremlin-linked businessman, Yevgeny Prigozhin.

Earlier this year, the paper was again targeted in what editors said was an apparent chemical attack.

Despite the pressure, the newspaper has refused to shy away from tough investigations. It was one of the publications that dug through the trove of documents leaked in the Panama Papers scandal, exposing offshore wealth of Russian officials.

Muratov was born in the southwestern city of Kuybyshev, now called Samara, on October 30, 1961.

He worked early in his career for the populist daily Komsomolskaya Pravda, but left with several of his colleagues who were not happy with its editorial policies. Together, they founded Novaya Gazeta and Muratov has served several times as its editor-in-chief since 1995.

Novaya Gazeta has a print circulation of around 100,000 and, according to the paper, had 18.4 million online views in November.