On Tuesday, April 18, 2017, the carbon dioxide concentration in the atmosphere reached in excess pf 410 PPM at the Mauna Loa Observatory, making the reading the highest ever recorded since CO2 level since 1958, when recordkeeping began. For those of you who keep exact records, the CO2 level was 410.28 PPM.

Carbon dioxide levels have skyrocketed over the past two years, and climate scientists attribute a small part of the rapid rise to the monster El Nino the world experienced recently, but humans are not off the hook. As long as we continue to use fossil fuels, we can expect things to get worse.

“It’s pretty depressing that it’s only a couple of years since the 400 ppm milestone was toppled,” Gavin Foster, a paleoclimate researcher at the University of Southampton told Climate Central. “These milestones are just numbers, but they give us an opportunity to pause and take stock and act as useful yardsticks for comparisons to the geological record.” 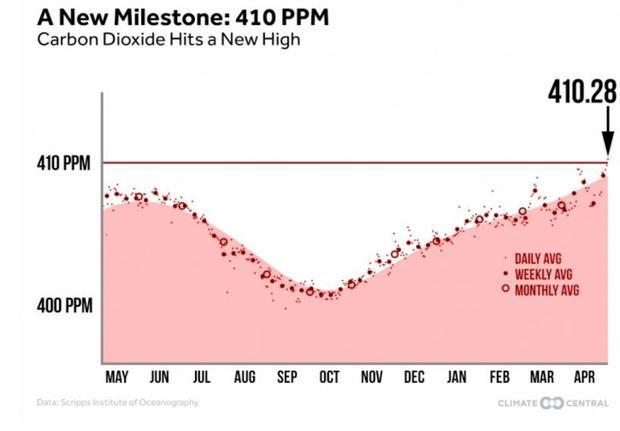 In looking at CO2 levels from an historical perspective, right now, it’s been millions of years since the Earth has experienced CO2 levels as high as they are today. Scientists with NASA, the UK’s Met office and the University of East Anglia, all agree that it is entirely possible that we will see an additional increase in CO2 levels of 2.5 PPM by the end of this year.

In an interview reported by Digital Journal in September 2016, Ralph Keeling, who monitors C02 levels at the Scripps Institute for Oceanography commented on the world reaching the 400 ppm threshold. He said that when the focus is on moving through a threshold, people come to appreciate the meaning more.

“I hope people remember this moment so that when they hear the carbon dioxide levels are 420 ppm in a matter of years, they’ll say, ‘I remember when it was 400,” he said. Now the question is – Will anyone remember April 18, 2017?

On May 1, 2017, the carbon dioxide concentration in the atmosphere at the Mauna Loa Observatory, Hawaii (Scripps) was 409 PPM.