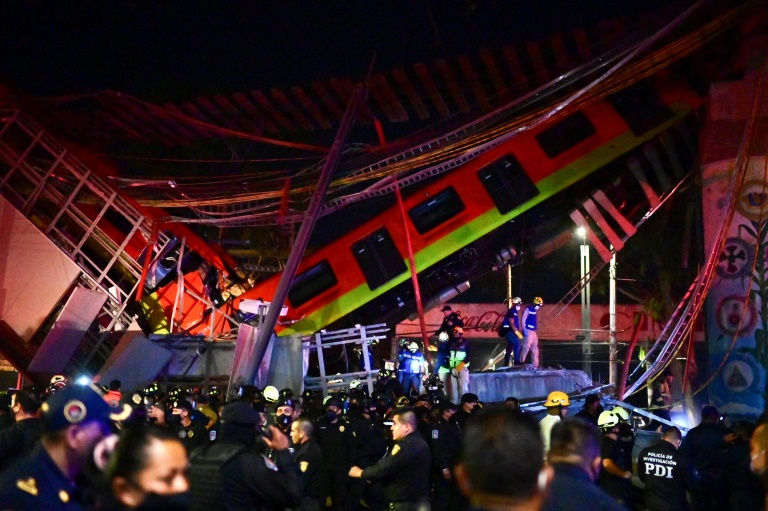 Mexico’s president on Tuesday promised an in-depth investigation to find those responsible for the deaths of at least 24 people in the collapse of an elevated metro train line with a history of problems.

The vow came as emergency services in the capital worked to retrieve the bodies of victims still trapped in the wreckage of the carriages that plunged towards the ground on Monday night.

Dozens were injured in the accident, one of the worst ever to strike the Mexico City metro, raising questions about construction and maintenance standards on a network used by millions every day.

“A thorough investigation will be carried out… to know the truth,” President Andres Manuel Lopez Obrador said at his daily news conference, adding that independent international experts would assist prosecutors in the probe.

“We cannot get into speculation, much less blame the possible perpetrators without having proof,” he added.

The metro line, the city’s newest, was built while Foreign Minister Marcelo Ebrard, a close ally of Lopez Obrador, was mayor of the capital from 2006-2012.

“For my part, I put myself at the full disposal of the authorities,” said Ebrard, considered among the possible ruling party candidates for the 2024 presidential election.

In 2014, Ebrard’s successor as mayor, Miguel Angel Mancera, suspended services at a dozen stations on the same metro line because repairs were needed due to excessive wear.

A study later concluded that there were problems with the design, operation and maintenance of the track.

The section where Monday’s accident happened was built by one of Mexican billionaire Carlos Slim’s companies, a spokesman for the tycoon confirmed.

Carriages were seen hanging from the metro overpass in the south of the capital in a tangle of twisted cables.

The rescue operation had to be suspended briefly during the night because of fears the wreckage was too unstable, but it later resumed with the help of a crane.

Most of those killed had yet to be been formally identified, leaving family and friends searching desperately for people who were traveling on the metro or in the area at the time.

At one hospital, Jose Luis Vigil was looking for a neighbor who was feared to have been crushed in his car when the concrete columns collapsed.

“We don’t know if he’s dead or alive. His stepfather told us that he had already died, but a reporter filmed a video where he is trapped and asks for help,” he told AFP.

Sheinbaum promised a structural examination of the affected metro line, which will remain closed, and a full investigation into the causes of the accident with the help of a Norwegian firm.

“Citizens have the right to know the truth,” said Sheinbaum, who is also seen as a ruling party contender for the 2024 presidential vote.

Ricardo de la Torre, a Mexico City resident who lives close to Line 12, said that he had been worried about the quality of the overpass because the trains make nearby buildings shake.

“By that simple fact we know that the construction is bad,” he said.

Fernando Espino, leader of the subway workers union, told the Milenio television channel that engineers had already reported failures on the line on various occasions.

“It could have been negligence. They didn’t take it seriously,” he added, noting that unlike other metro lines number 12 is maintained by an external firm.

Monday’s incident comes just over a year after two subway trains collided in Mexico City, leaving one dead and around 40 injured as panicked passengers escaped through dense smoke.

In January of this year, one person died and 29 suffered smoke inhalation injuries in a fire in the metro’s control center.

In one of the worst ever accidents on the network, two metro trains rammed into each other leaving 23 dead and 55 injured in October 1975.