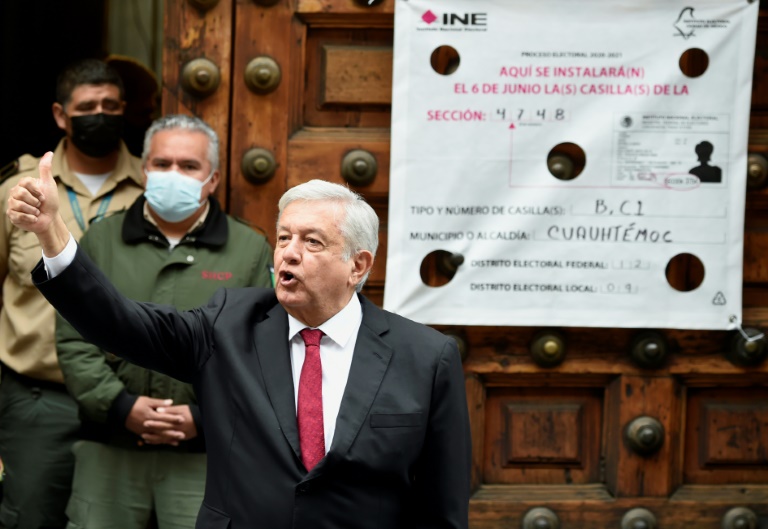 Mexican President Andres Manuel Lopez Obrador’s party lost its absolute majority in the lower house in elections Sunday, initial results indicated, in a setback to his promised “transformation” of the country.

Lopez Obrador’s Morena party was set to take between 190 and 203 of the 500 seats, the National Electoral Institute said, though it could still secure an absolute majority with its allies.

The polls were seen as a referendum on his more than two years in office overshadowed by the coronavirus pandemic and cartel-related violence.

Dozens of politicians have been murdered in the months leading up to the midterm elections for the lower house of Congress, 15 of 32 state governors and thousands of local politicians.

On the eve of the election, gunmen killed five people helping to organize voting in southern Mexico, while two human heads were left at polling stations in the border city of Tijuana.

Lopez Obrador was elected in 2018 for a term of six years, vowing to overhaul Mexico’s “neoliberal” economic model, root out corruption and end profligacy by a privileged elite.

The future of the left-wing populist’s reform agenda — such as seeking greater energy independence — hinged on whether voters would punish him for issues such as the pandemic.

“They never had a plan and they still don’t,” said Claudia Cervantes, a hospital worker.

But some other voters such as Tania Calderon were willing to give the ruling party more time.

“Without the pandemic, the government would have done better,” the 37-year-old said.

Mexico’s economy, the second-largest in Latin America, plunged by 8.5 percent in 2020 in the worst slump in decades, although the government predicts a rebound this year.

Despite more than a quarter of a million coronavirus deaths — one of the world’s highest tolls — the 67-year-old president continues to enjoy public approval ratings above 60 percent.

Deaths and infections from Covid-19 have fallen steadily for several months, helped by a vaccination campaign.

Lopez Obrador owes much of his popularity to his social welfare programs aimed at helping the elderly and disadvantaged Mexicans.

His supporters say he is their first president to put the interests of the Mexican majority, many of whom live in poverty, before those of the wealthy elite.

The president’s critics accuse him of a dangerous tilt towards authoritarianism with attacks on the judiciary and the National Electoral Institute.

The ruling coalition has had a two-thirds supermajority in the lower house of Congress that enabled Lopez Obrador to amend the constitution without negotiating with his opponents.

Without it, he faces a tougher time pushing through his reforms.

Sunday’s vote has been overshadowed by a wave of political bloodshed that has seen more than 90 politicians murdered since the electoral process began in September.

In the southern state of Chiapas, gunmen killed five people on Saturday in an attack that coincided with the delivery of ballot boxes and other voting materials.

A manhunt was launched for the perpetrators, whose motives were not immediately known.

In Guerrero, one of the country’s most violent regions, also located in southern Mexico, members of a community police force kept watch over voting.