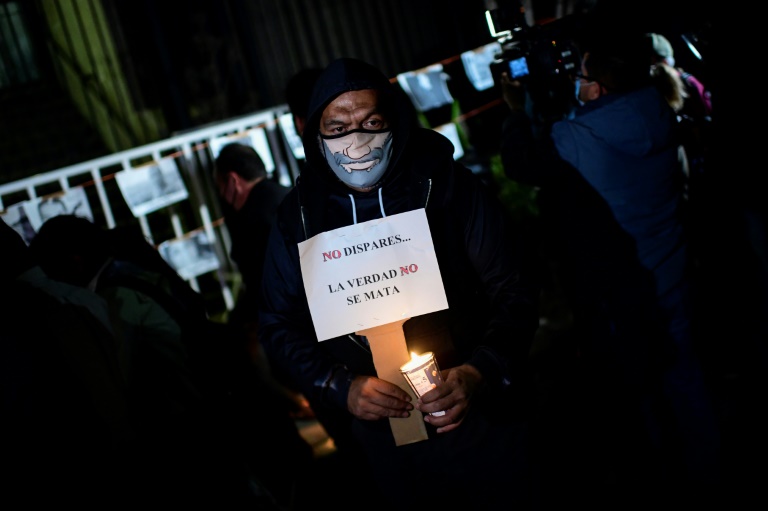 Mexican President Andres Manuel Lopez Obrador hit out Friday at EU lawmakers who urged his government to protect journalists and accused him of intimidating the press, branding their statement slanderous.

The resolution by the European Parliament follows the murders of at least six media workers so far this year in Mexico, one of the world’s most dangerous countries for reporters.

Lopez Obrador has bridled at suggestions that his government needs to do more to protect journalists, and the text adopted by EU lawmakers on Thursday prompted an angry response.

“It is unfortunate that they join the reactionary and coup strategy of the corrupt group (opposed to Lopez Obrador’s reform agenda) like sheep,” a Mexican government statement said.

It urged the EU lawmakers to “leave behind their interventionist mania disguised as good intentions.”

In Mexico “freedom of expression and the work of journalists are respected,” it added.

Lopez Obrador said at his daily news conference that he had personally written the response together with his spokesperson to what he called a “slanderous resolution” by the European Parliament.

“What they maintain is not true. It is completely false,” he said.

The EU lawmakers’ resolution “calls on the Mexican authorities to take all the necessary steps to ensure the protection and the creation of a safe environment for journalists and human rights defenders.”

The resolution “condemns the frequent attacks on media freedom… and calls on the Mexican authorities to uphold and safeguard the highest standards for the protection of freedom of speech, freedom of assembly and freedom of choice.”

The situation has deteriorated since Lopez Obrador’s presidential election victory in July 2018, with at least 47 journalists murdered since then, the text said.

Violence, human rights violations and attacks against journalists and human rights defenders “are dramatically rising in Mexico,” considered the most dangerous place for media workers outside an official war zone, it said.

Around 150 journalists have been murdered in Mexico since 2000, and only a fraction of the crimes have resulted in convictions, according to media watchdog Reporters Without Borders (RSF).

Last month US Secretary of State Antony Blinken voiced concern about the string of killings, calling for “greater accountability and protections for Mexican journalists.”

Lopez Obrador described the top US diplomat’s remarks as “interfering” and said that he appeared to have been “misinformed.”