Benjamin Von Wong is an artist who’s also a photographer, rather than “a photographer”. His site 450years.com is a sort of working testimony to what good photography and art forms can be.
He offers Lightroom tutorials and what is basically a good business model for any creative person. The net message from his published work is “Art can do anything”.
He then proceeds to prove it, particularly with Mermaids Hate Plastic. Bejamin sent me some of his pics, and I was truly speechless. That doesn’t happen often, but this time with good reason. The video is truly something else. It’s an epic of expression.
You’d have to have been dead for some time if you don’t get this message. The 10,000 bottles represent the average usage of one person in their lifetime. The mermaid is nature, the sea, and also humanity and the sea.
Plastic and the sea: A sea of human stupidity 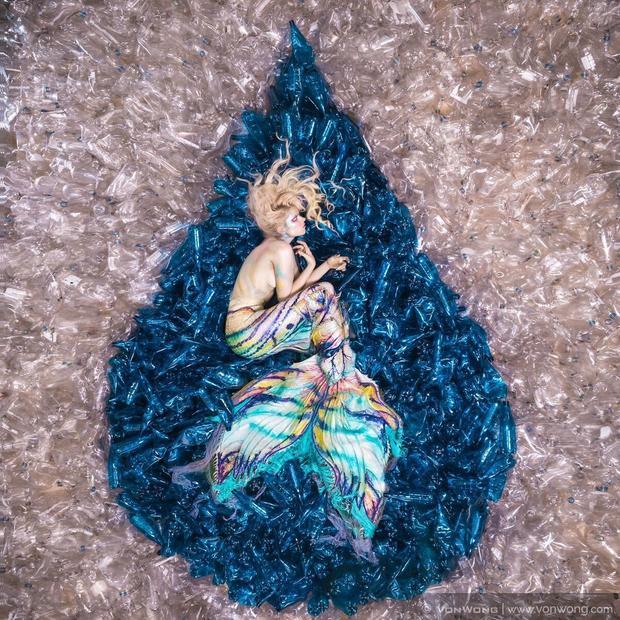 Maybe the issues do, though. A few facts:
*The sea is now full of junk, notably plastic.
*The plastic is accumulating in the ocean and staying there. It’s slowly breaking down, releasing materials in to the food chain.
*The plastic is entering the food chain in micro form.
*It’s literally filling the oceans.
*It’s killing sea life of all kinds.
*The sea provides a massive percentage of the world’s food, and demand is rising.
*The demand is being met by overfishing and catching fish which are exposed to all the nasty things we’re putting in the ocean.
*Fish have definitely been contaminated and a percentage do contain plastic.
Doing something about it
Not much is being done about the problems, apart from some study and some underpowered cleanup attempts. The Pacific garbage Patch is the best known case of accumulated materials. It’s an area at least the size of Texas, maybe twice that size. There are many others.
Nobody’s doing much about it, and the garbage patches are growing.
This is one of the all-time biggest problems humanity has ever created for itself.
Plenty can be done –
*Physically extract the garbage and get it out of the water. A lot of the bigger stuff can be simply picked up. You could even adapt some of those drift nets to collect it and feed it through a factory ship processing schematic.
*Use membrane filters to trap oceanic garbage. This is 40 year old technology; you can filter anything in a liquid by adapting it to a molecular shape. It’s how they can turn sewage in to safe drinking water, by only allowing water molecules through.
*Simply add more garbage bins around the world’s beaches and drains to soak up the waste.
* Pay deposits on returned bottles. It worked for decades until El Cheapo Think got to work on “monetizing” this planetwide slum. A plastic tax is another successful option in Europe.
*Develop safe breakdown plastics as an all-round solution to plastic contamination. Plastic is carbon, which does break down in any other form. You could even build in fish food, for god’s sake, and reboot the food chain.
*Just stop using plastic bottles! What’s wrong with glass, anyway? try to stop plastic pollution before it even enters the ocean in the first place.
About the videos
The imagery doesn’t need any verbose explanation at all, but check out the video, particularly the bits in the first and second of the three videos about how this extraordinary shoot was done. It’s an object lesson in practical photography, and managing a truly demanding bit of production.

The second video is about the issues with production, and the imagery issues with shooting in two and three dimensions. The pattern design is also a revelation, if you’re a real production person and looking at difficult images.
A lot of trial and error, but check out the work! Also take note and respect at the line from Benjamin about the model, mermaid and looks “…and putting a layer of garbage on top…” Nothing but art can take you to places like this. Wanna explore the universe? Take up an art form. 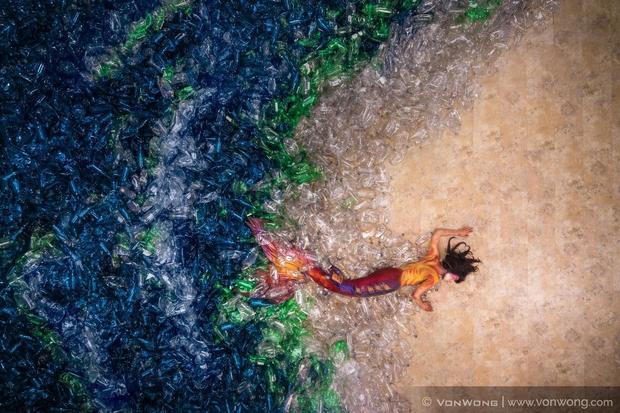 Interview
So when I got a chance to interview Benjamin, I had a few questions:
#MermaidsHatePlastic is a pretty unambiguous representation of the sheer chaos plastic packaging is causing in ecosystems. Why did you decide to approach the topic this way?
Plastic pollution as a whole is a large complex issue and I think that asking people to “stop using plastic” is a lot harder of a sell than trying to get people to make a small tangible change like trying hard to not use plastic bottles.
From an artistic perspective, it also works far better if you have repeated recognizable elements as opposed to a mass of miscellaneous objects. I think this makes for a far more visceral image.
Your video got a hell of a response. What were you expecting, and what sort of feedback have you received?
Actually I got 1.5 million views on my video in one day.
When I create projects like these, I always hope for the best but try not to get expectations too high. I spend a lot of time preparing a launch and building up momentum, but you can never know what the response of the Internet will be.
So far, the response on Facebook has been phenomenal but mainstream media hasn’t quite picked it up – possibly because there isn’t a “current highlight” for them to focus on like Earth day or world plastic pollution day or whatsoever.
I’m still trying to reach out to reporters so fingers are definitely still crossed!
As a matter of interest to other committed artists who might want to do their own work – How easy/difficult was it to do the full shoot for Mermaids Hate Plastic? Did you just go for it, or plan and stage?
I definitely encourage people to try and make a difference in their own way. I happen to be a photographer so organizing a photoshoot around the topic makes sense but there are so many different ways to get involved – from simply talking to your favourite restaurant and encouraging them to move away from plastic cups, making a personal choice to buy a canteen … or to create their own artwork.
Creating this series for me was not technically any more complicated than my previous photoshoots… but there was also never any guarantee that it would work out.
I think that regardless of how hard something looks, it’s important to try regardless. The fear of failure will always be there but sometimes you can really help make the world a better place.

How did your mermaid feel about swimming topless through thousands of plastic bottles? Talk about a labour of love…
Clara Cloutier, the model, was a trooper. Never a single word of complaint in holding the complicated uncomfortable positions!
You’ve achieved a great visual message, made for a very visual culture. One of the most serious problems environmental groups face is delivering a high impact message. How would you suggest they approach their delivery to the public?
I wish that environmental groups were less conservative and more experimental. Most like to stick to traditional strategies like fundraising galas and golf tournaments using tried and true marketing strategies but those are never the projects that enter the history books.
The truth is, everyone knows the environment is under threat – they just need to be given a new reason to care – and that means continuously starting a new unique conversation regardless of the medium or methodology.
I have to wonder, is there an option for a “pollution performance art” movie? Something like “Plastic Bottles Film Noir” or something?
Maybe if someone wanted to sponsor it.
Given the high level of response – Any chance of using the shoot materials for commercial merchandising, like prints, T shirts, etc.?
I plan on creating a few watermarked photographs at cost for people to purchase at cost so that they can put it up and have it as a conversational topic within their homes, schools or companies! I was also thinking that stickers would be great but still need to work on that one.
There are quite a few environmentalists who specialize in ocean pollution, and many more campaigning against plastic bottles. Have they been in contact, and what can you do to help them?
A few have reached out but nothing concrete has materialized so far. I’m always open to ideas and suggestions. If there’s one thing I specialize in it’s creating shareable media and I would love to use my skills to make the world a better place.
Unfortunately, just because someone wants to work together doesn’t always mean that an idea can be created out of thin air. Schedules, strategies, interests, timing, budgets, etc… all need to line up. It’s a lot of work and more often than not, they don’t work out.
Looks like you could take this anywhere. What’s the next move?
For now, keep pushing to try and get this series mainstream. I have an anti-coal piece coming out in January and an Anti-dredging one I hope to push out in February.
We’ll see what the next crazy idea is over time. Who knows!

I’d like to thank Benjamin, for a truly fascinating experience — and a marvelous video. 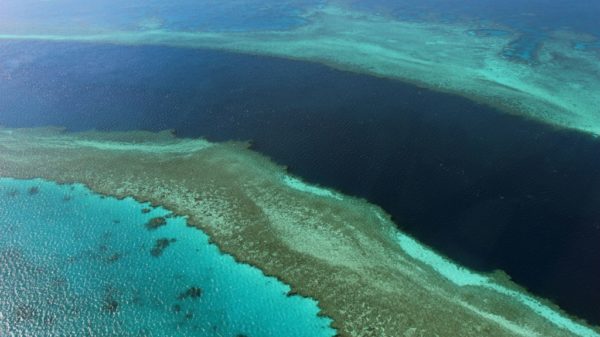