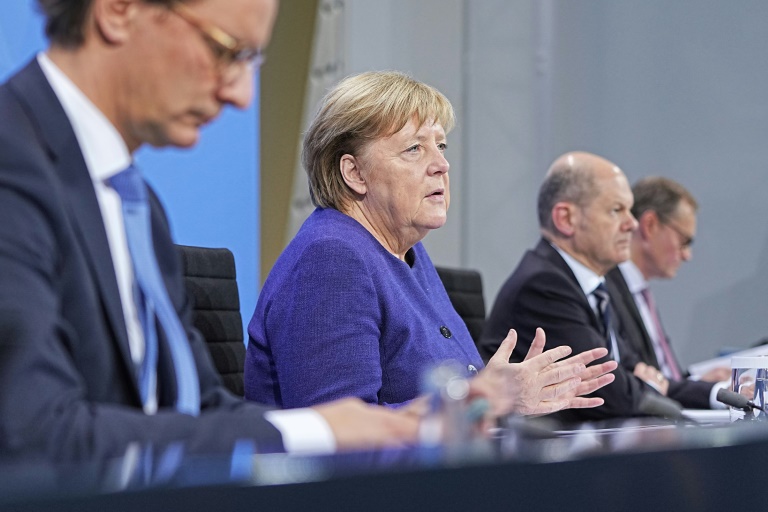 German Chancellor Angela Merkel issued an urgent warning on pandemic management on Thursday to the new government coming in to succeed her, imploring it to take quick, decisive measures as the country’s total death toll passed 100,000.

Speaking one day after Olaf Scholz presented his new centre-left-led ruling coalition due to take office next month, the outgoing Merkel told reporters that “every day counts” as Germany continues to smash daily coronavirus infection records.

“We need more contact restrictions,” Merkel said, adding that she had “today clearly told” Scholz that “we can still manage this transition period together and look at all necessary measures”.

Calling Thursday a “sad day” over the grim death toll, Merkel, a trained scientist, said she had sought dialogue with Scholz, a Social Democrat, and the leaders of his coalition partners Greens and the libertarian FDP because of the gravity of the situation.

Germany weathered earlier bouts of the pandemic better than many other European countries, but has seen a recent resurgence, with intensive care beds rapidly filling up.

Europe’s largest economy recorded 351 Covid fatalities in the past 24 hours, bringing the official death toll since the start of the pandemic to 100,119.

The escalating health crisis poses a baptism of fire for the new government.

The country has been stuck in political limbo since the September 26 general election, with the popular Merkel governing only in a caretaker capacity.

Her Health Minister Jens Spahn warned this week that most Germans would be “vaccinated, cured or dead” from Covid-19 by winter’s end, as he urged more citizens to get jabbed.

The spike in Germany comes as Europe has re-emerged as the pandemic’s epicentre, with the continent battling sluggish vaccine uptake in some nations, the highly contagious Delta variant, colder weather sending people indoors and the easing of restrictions.

An AFP tally of official figures showed on Thursday that more than 1.5 million people have died from Covid-19 in Europe.

Scholz began a presentation of his new government’s policy roadmap on Wednesday by announcing new measures to tame the fourth wave.

These included forming a corona response task force based at his office and earmarking one billion euros ($1.12 billion) in bonuses for overstretched health workers on the front lines.

However that timetable has already been criticised as far too little and too late.

“The latest decisions are like announcing in a flooding catastrophe a plan to hire more swimming teachers and distributing a few water wings and rubber ducks,” Sueddeutsche newspaper fumed.

“The coalition has big plans, but what use are they if we are all locked down over Christmas with thousands dying each day?”

As the fourth wave rages, the German health sector has had to call on hospitals elsewhere in the EU for help.

Germany last week began requiring people to prove they are vaccinated, have recovered from Covid-19 or recently tested negative before they can travel on public transport or enter workplaces.

Several of the worst-hit areas have gone further, cancelling large events like Christmas markets and barring the unvaccinated from bars, gyms and leisure facilities.

The surge has ignited a fierce debate about whether to follow Austria’s example and make vaccination mandatory for all citizens, with Scholz voicing support for compulsory jabs for health staff.

Germany’s Covid-19 crisis has in part been blamed on its relatively low vaccination rate of about 69 percent, compared to other Western European countries such as France, where it is 75 percent.

Meanwhile Bayern Munich football club confirmed on Wednesday that star midfielder Joshua Kimmich and back-up striker Eric Choupo-Moting — both of whom are unvaccinated — have tested positive for the virus.

In this article:covid, Germany, Pandemic