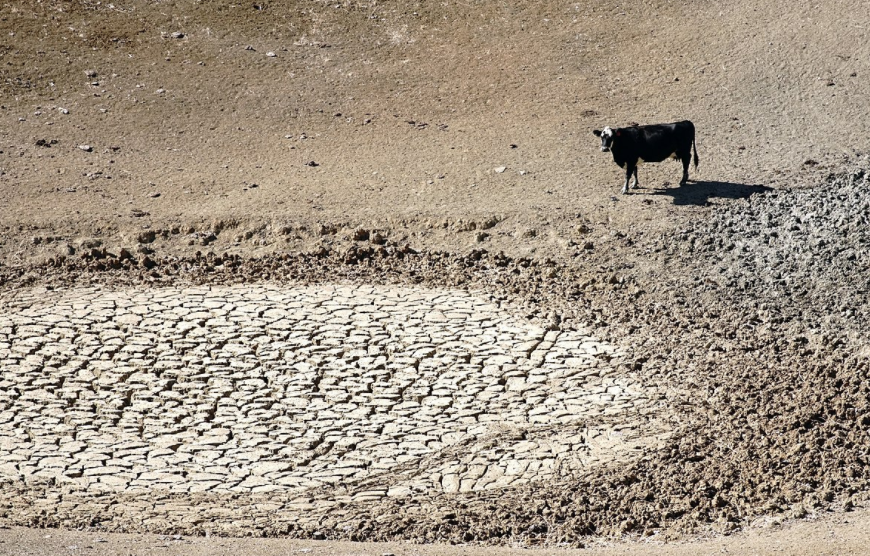 Human-caused climate change has made the megadrought in the U.S. West 72 percent worse, with last year’s megadrought seen as “exceptional,” with the period from 2000 to 2021 being the driest in 1,200 years.

The study, published Monday in Nature Climate Change, revealed the megadrought is now the worst-case scenario officials and scientists worried about in the 1900s. The drought deepened so much in 2021 that it is 5 percent worse than the old record in the late 1500s.

Current drought conditions began in 2000, and have resulted in reduced water supplies across the American West, devastating farmers, and ranchers, as well as fueling wildfires.

But exceptional conditions in the summer of 2021, when about two-thirds of the West was in extreme drought, “really pushed it over the top,” said A. Park Williams, a climate scientist at the University of California, Los Angeles, who led an analysis using tree ring data to gauge drought, according to the New York Times.

As a result, 2000-21 is the driest 22-year period since 800 A.D., which is as far back as the data goes. And it was found that anthropogenic climate change played a major role.

Our reliance on water is at risk

Water is a necessity for life as we know it, and Williams says, “We have a society that’s relying on there being the amount of water there was in the 1900s,” reports NPR.org.

“But now with the number of water molecules available to us declining, it really is time for us to get real about how much water there is for us to use.”

To reach his conclusions, Williams looked at tree ring data from thousands of sites to conduct the research. This included data from live trees, dead trees, and wood beams preserved at Native American archeological sites.

Researchers were given insight into drought events that date back to A.D. 800, around the time Charlemagne was being crowned emperor of Rome.

Four other megadroughts were identified in that time period, the most notable being a 23-year drought that ended in the late 1500s. There were hopes during a wet 2019 that the current megadrought was following a similar pattern, Williams said.

“And then from summer 2020 through all of 2021, it was just exceptionally dry across the West … indicating that this drought is nowhere near done.”

Fluctuations exist, but the bottom line is the same

In December 2021, 10 inches of rain fell in Los Angeles, leading many to believe they were seeing the end of the drought. It was the second-wettest such month on record for the city, according to the National Oceanic and Atmospheric Administration (NOAA).

Last month, less than a tenth of an inch of rain fell in Los Angeles, making it the eighth-driest January on record for the city. Halfway through February, things are only getting worse. This year is off to a record-dry start.

Bottom line: Fluctuations like these are becoming more pronounced due to climate change.

“There’s good documentation that, in fact, there is less rainfall. What seems to be happening according to most of the climate scientists is we’re getting longer, drier periods,” said David Feldman, professor of urban planning and public policy at the University of California at Irvine, and director of Water UCI, according to CNN. “But the irony is those longer, drier periods are punctuated by very intense storm events.”

And Williams says it will take several years of extreme rainfall to have a noticeable effect on the megadrought. “It’s extremely unlikely that this drought can be ended in one wet year,” he said.

Dr. Julie Cole, a climate scientist at the University of Michigan who was not involved in the research, said the study also confirms the role of temperature, more than precipitation, in driving exceptional droughts. Precipitation amounts can go up and down over time and can vary regionally, she said. But as human activities continue to pump greenhouse gases into the atmosphere, temperatures are more generally rising.

As they do “the air is basically more capable of pulling the water out of the soil, out of vegetation, out of crops, out of forests,” Dr. Cole said. “And it makes for drought conditions to be much more extreme.”