The SWS survey as well as the Pulse Asia survey virtually guarantees Pacquiao a seat in the 24-member senate of the Philippines.

In the Pulse Asia poll conducted ahead of the SWS survey, Pacquiao landed in the No.4 spot (4-6). In both surveys, Pacquiao has ranked consistently in the Magic 12 list of possible winners although he was momentarily eased out of the Top 12 list when he got embroiled in a controversy stemming from his statement about same sex marriage.

“I’m happy campaigning right now. So many people are shouting, cheering for me. I’m glad with the warm welcome in every rally. I really didn’t expect that,” Pacquiao told AFP on Thursday during a break from the festivities. 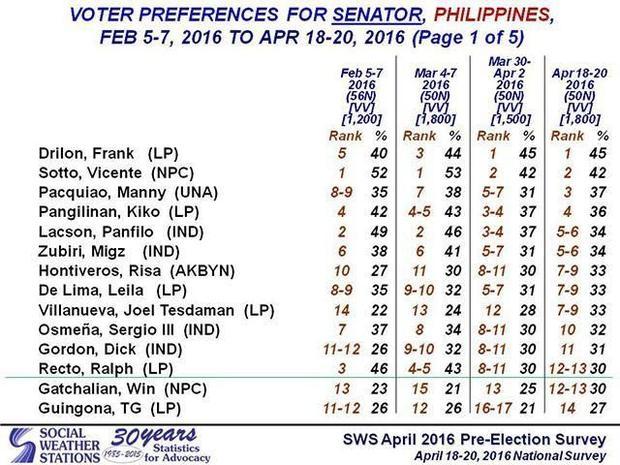 Pacquiao’s survey ranking got a big boost when he announced his retirement from boxing following his impressive unanimous decision win over Timothy Bradley at the MGM Grand Garden Arena in Las Vegas, Nevada last April 9.

In his announcement, Pacquiao said he wants to spend more time with his family after a 21-year boxing career and to pursue his long-term political goal.

During the training for the Pacquiao-Bradley fight, boxing trainer Freddie Roach told Pacquiao he will get more votes if he wins impressively in their trilogy fight. Roach is hoping to see Pacquiao in the ring when he is elected president after serving as senator.

“I just told him the better he looks in this fight, the more votes he’ll get,” said Roach, “When I told him that he gave me a real big smile. That was a yes,” he added.

“My goal is to see President Pacquiao fight,” said Roach who like Pacquiao’s promoter Bob Arum wants to see Pacquiao being sworn in as Philippine president during his lifetime.

Pacquiao has seven more days to court the voters as campaign period for national candidates officially ends on May 7, 2016.