And while scientists have been closely monitoring the growing crack in the Larsen C ice shelf, and another one on the Brunt ice shelf that forced the British Antarctic Survey to move their Halley VI Research Station, there are other frozen features on the continent that are being impacted by our warming world.

The Pine Island Glacier is a large fast stream glacier, meaning that there’s a region of its ice that moves faster than the surrounding ice. Fast stream glaciers make up about 10 percent of Antarctica’s glaciers and are responsible for most of the ice leaving the ice sheets. Pine Island is melting very fast and already accounts for 25 percent of Antarctica’s ice loss. 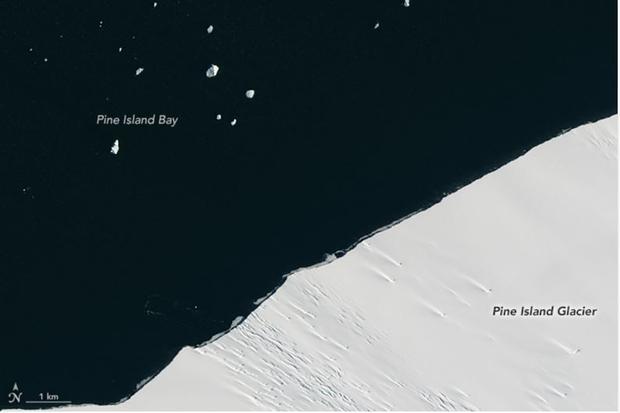 Satellite imagery captures calving of iceberg
NASA’s Operational Land Imager (OLI) on Landsat 8 captured before and after images of Pine Island Glacier’s floating edge on January 24 and again on January 26. Scientists at NASA point out that the Manhattan-sized chunk of ice is actually dwarfed by the gigantic 225-square miles (583 square kilometers) iceberg that broke off in July 2015. Just to put it in perspective, it was 10-times the size of Manhattan.
READ MORE: NO, MR. PRESIDENT, THE KEYSTONE DEAL IS NOT DONE
Climate Central is reporting that Ohio State glaciologist Ian Howat said the recent satellite imagery shows the calving event “ is the equivalent of an ‘aftershock’” following the July 2015 event. That the iceberg was “only” the size of Manhattan, underscores just how dramatic previous breakups have been. 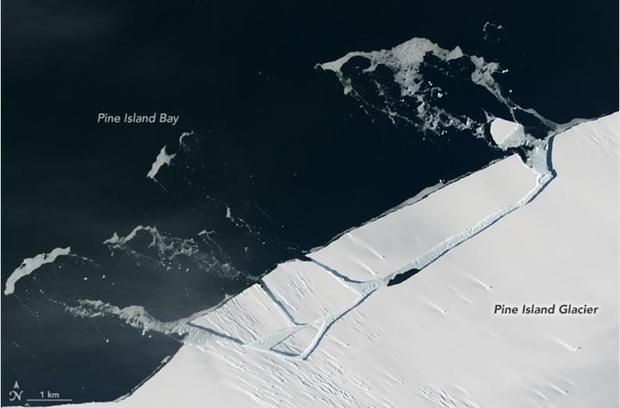 Ice edge of Pine Island Glacier on January 26, 2017. The iceberg is at the upper right in the image. Note the cracks, evidence of additional calving to come.
NASA Earth Observatory

Simon Gascoin, an ice and remote sensing expert at France’s National Center for Scientific Research, taking to Twitter, noted that careful observation shows another crack in the ice can be seen just inland from where the iceberg calved. He pointed out that another calving event was entirely possible.

In an email, Gascoin said that while it may be hard to tie “individual events” to climate change, “many studies have shown that Pine Island Glacier is retreating and thinning. The recent rifting and calving could totally be evidence of an ongoing, rapid disintegration of the ice shelf, mostly due to ocean warming.”

Warmer waters potentially dooming the stability of inland ice
Mashable reports that scientists are anxiously watching the Larsen C ice shelf for what’s likely to be one of the largest iceberg birthing events on record in the next few months. 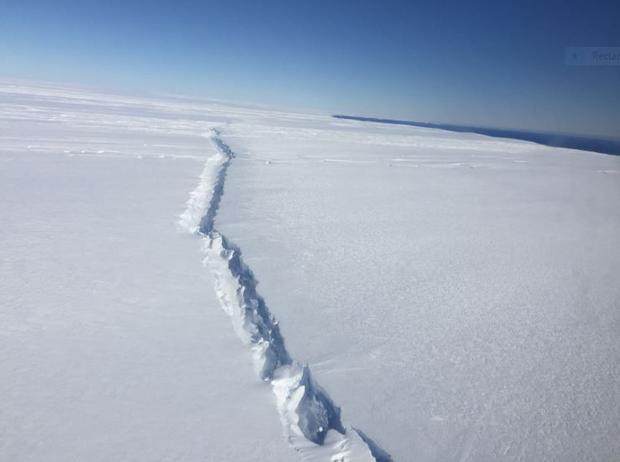 Rift in Pine Island Glacier ice shelf, West Antarctica, photographed from the air during a NASA Operation IceBridge survey flight on November 4, 2016. This rift is the second to form in the center of the ice shelf in the past three years. The first resulted in an iceberg that broke off in 2015.
Nathan Kurth/NASA

According to NASA, there are rifts on the Pine Island Glacier’s ice shelf going back about six miles from the ice edge, including a large one spotted during a scientific flight on November 4, 2016. NASA says the rifts are sometimes hard to see because they extend upward from the bottom of the ice shelf.

Scientists have already warned that warming ocean waters could put the Western Antarctic ice sheet into an irreversible period of collapse, causing a sea level rise of more than a meter, or 3.4 feet, by 2100, and an even larger amount thereafter, according to a study published in the journal Nature in March, 2016.