Like it or not, but the reason for the northern migration is attributed to the warming ocean. But regardless of who or what is to blame, it is driving lobstermen in Connecticut and Rhode Island out of business.

Surprisingly, the price of lobster in restaurants, supermarkets and lobster shacks frequented by tourists hasn’t changed appreciably, simple because lobster availability has remained steady. But the lobster’s historical connection to New England is taking a beating.

And it is not just a historical identity that is at risk, but the economy of the southern New England fisheries industry has been affected. The Atlantic States Marine Fisheries Commission (ASMFC) released its lobster stock assessment report on August 5, 2015, and it confirmed what many southern New England lobstermen already know, and that is that lobsters have moved north.

The status of the lobster population in 2015
In the 2015 report, a mixed picture emerged of the American lobster stock status. The report showed a record high number of lobsters on the Gulf of Maine (GOM) and Georges Bank (GBK) fisheries. The GOM/GBK stock has not been overfished and while the GOM and GBK lobster populations had previously been considered as a separate stock, they are now combined into one stock.

The same report showed there was a record low abundance of lobster stock in the southern New England (SNE) region, and with the severe depletion of the lobster population, it was decided there were poor prospects of recovery, making protection of the remaining lobster population a necessity.

The lobster population off southern New England started dropping about 15 years ago, reaching a record low in 2013 when the lobster catch was about 3.3 million pounds, down from a peak of 22 million pounds in 1997. Now, because of increasing water temperatures, the stock has collapsed to a point where it is beyond recovery. 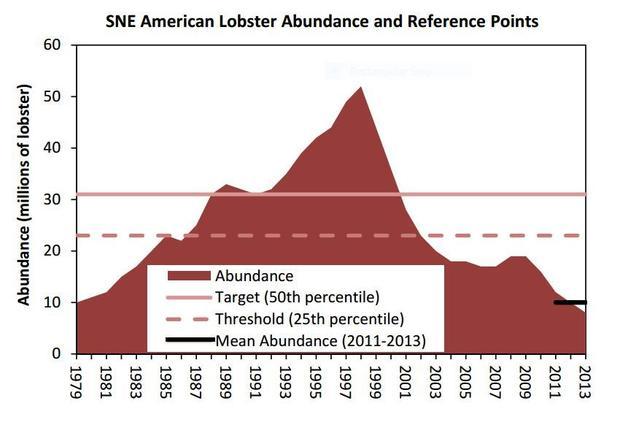 Would a moratorium on lobstering in southern New England help?
At a power plant on Long Island Sound, there were 75 days where the water temperature was above 68 degrees Fahrenheit in 2012, 2013 and 2014, according to the report. Between the years 1997 and 2010, there were only two times this happened.

Right now, the ASMFC is recommending that southern New England lobster stocks be closely monitored, and measures put into place to protect the remaining lobster resources, with the hopes that the population will rebound. John Hoenig, a professor at the Virginia Institute of Marine Science, says that nothing short of a moratorium on lobstering would help to save the southern New England lobster, according to the Associated Press.

A moratorium will kill what’s left of lobstering in the region, yet others are saying that if its an environmental problem, there’s not much anyone can do to change what is happening. “We can’t control the water temperature,” lamented William Adler, a Massachusetts lobsterman, and a member of the commission’s lobster management board.