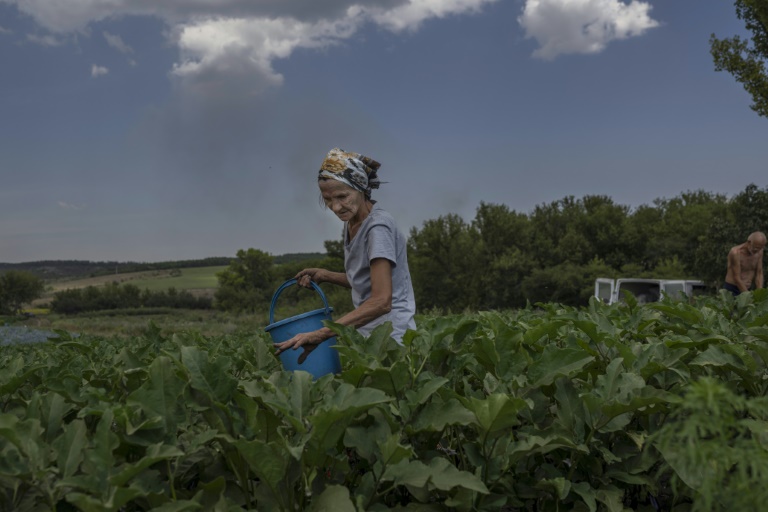 Svitlana Klymenko is restless with rage but has nowhere to go.

Most of her life has been devoted to working at a salt mine in Ukraine’s eastern Donbas region.

But now — in her retirement — she has been forced to make a home underground in the city of Soledar, besieged by Russian forces and under unrelenting shelling.

“I just want to live, to grow old in a normal way, die a normal death, not be killed by a missile,” the 62-year-old told AFP.

But her meagre pension means she does not have the funds to escape the battleground and start a new life.

“How should I live? On humanitarian aid? Asking for food with an outstretched hand?” she asks, pacing the dank lair beneath an apartment block where she now spends three quarters of her time.

“We hope for the best, but every day it turns out worse and worse,” she lamented, her gold teeth catching the meagre light in her makeshift home.

Russia called off its offensive on the Ukrainian capital in late March and refocussed its efforts on Donbas, where the Kremlin has been backing separatists since 2014.

The battle has been gruelling, devolving into an artillery duel between troops dug in around strategic settlements and cached in hedgerows and forests fringing vast swathes of farmland.

There are signs Russia is once again regrouping its forces, this time to fight off a rumoured Ukrainian counteroffensive along the southern coast.

However, the assault on Soledar — near the larger city of Bakhmut — “has been its most successful axis in the Donbas” over the past month, according to Britain’s ministry of defence.

White and black smoke smear the horizon above Soledar and the road into the city is dappled with tread marks from tank tracks, as Ukrainian vehicles pour in and out from the north and the west.

Every few moments, the eerie urban silence is broken by the chest-thumping thud of cluster bombs and incoming artillery, casting dust into the searing summer sky.

Though the industrial sector of the city is bombarded constantly, the gold and blue Ukrainian flag still defiantly flutters on its highest point.

To escape the deadly contest above, Klymenko lives below, in a semi-subterranean cellar.

Around 60 people lived here — some for as long as three months — but last week a shell hit, killing one man, and almost everyone fled, she said.

Now it has been left to Klymenko, her husband and another man — 59-year-old Oleg Makeev — as well as a caged parrot and a wandering cat.

“You can’t cook anything normally here, you can’t wash yourself. How am I supposed to feel?” Makeev trails off.

Outside the city limits, Ukrainian soldiers mill around at the roadside, their vehicles parked in the shade, hidden from Russian aerial reconnaissance.

The locals no longer stop to stare at the smoke on the horizon, nor do they flinch at the wrenching sound of blast impacts.

There are rumours the Russians may already be inside the city limits, and both Bakhmut and the nearby larger city of Kramatorsk bear signs the defenders are preparing for urban warfare there.

One soldier, 27-year-old Mykhailo, wanders down the road leading towards Soledar carrying his rifle.

Above one eye the word “Freedom” is etched in cursive tattoo ink.

But the soldiers too have been forced into life underground.

“We are sitting in the trenches,” says Mykhailo. “There is a lot of their artillery, mortars, and we cannot react, we have nothing.”

“They will advance further,” he suspects. “We hide more than do anything useful.”