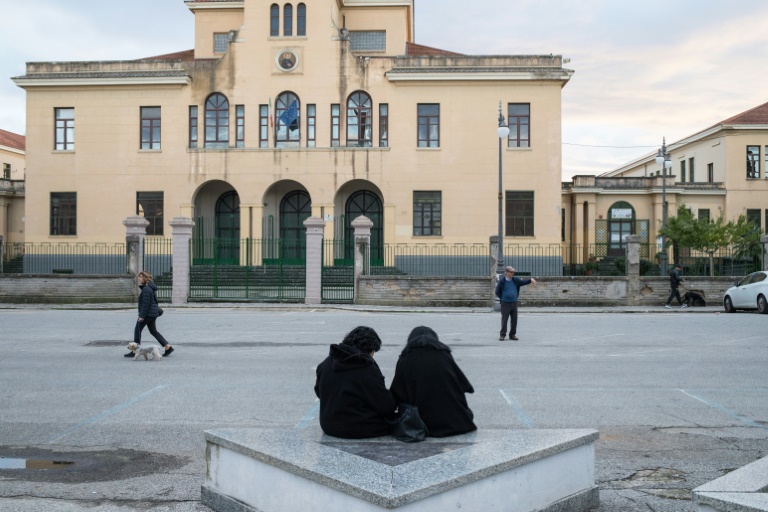 Two years ago, thousands of people in the Calabrian city of Vibo Valentia took to the streets on Christmas Eve morning to celebrate a massive police sweep that netted hundreds of alleged mafia members.

For those living under the shadow of the ‘Ndrangheta, it was the first time locals had dared to publicly denounce Italy’s most powerful organised crime syndicate that for decades has infiltrated the southern region’s institutions, suffocated its economy and terrorised its people.

Unlike in previous instances — when relatives of seized ‘Ndrangheta members showed up at police stations to heckle authorities and applaud those arrested — this time, the cheering was for the police.

“There was unending applause, it gave me shivers,” recalled Giuseppe Borrello, the local representative for anti-mafia association Libera.

“From a symbolic point of view, it was important.”

Two years on, however, the future is far from certain for the city and province of the same name — often referred to just as Vibo — as 355 arrested bosses, operatives and white-collar helpers of its ‘Ndrangheta stand accused of a laundry list of crimes, from extortion and usury to money laundering and murder in an ongoing “maxi-trial”.

A shooting last month has revived fears that a period of relative calm following the arrests is coming to an end, while sharp divides remain among the city’s 31,000 residents.

Some see Vibo at a turning point, while others insist the ‘Ndrangheta is still too powerful to be overcome. There are plenty, too, who accuse the state of overzealousness with its hundreds of arrests.

After a Molotov cocktail was thrown onto the restaurant’s patio, he headed to the police.

“It was a tough time,” La Scala told AFP. “These things really stress you out.”

La Scala, a civil party to the ongoing trial, said he felt “very confident” in authorities’ new commitment in confronting the ‘Ndrangheta after decades of institutional inertia, inefficiency and corruption.

“We’ve felt a new atmosphere of freedom in Vibo” after the December 2019 crackdown, La Scala said.

The head of Vibo’s provincial carabinieri, Colonel Bruno Capece, agrees, while warning much remains to be done.

“Before, practically every night we got word of cars burned, roll-down gates shot at or damaged, people kneecapped, mafia phenomenon,” Capece said.

The last murder in Vibo was in April 2020 and its perpetrator quickly found.

Police similarly solved the approximately 10 murder attempts since the raids within 48 hours, he said.

The close work of police and prosecutors, he said, is a new sign of credibility in a territory where locals have long been accustomed to denunciations that go nowhere and trials that drag on or end in acquittals — often through collusion between the ‘Ndrangheta and those in power.

Until relatively recently, “only the clans ruled here, and the response of the state was practically non-existent,” said the public prosecutor of Vibo, Camillo Falvo.

Trust in authorities is earned through results, said Falvo, and until now, the weak state has played directly into the hands of the ‘Ndrangheta.

“If you file a civil lawsuit and it’s never decided… the second time you’ve got a problem you go to the boss nearby and tell him, ‘Look, this guy has to pay back my money’.”

Site of the ancient Greek colony of Hipponion, Vibo still boasts a picture-perfect 12th-century castle on a hill where goats graze in the evenings, offering a spectacular view of the distant volcano of Stromboli.

But descend into the city, marred by abandoned storefronts and unsightly, half-finished concrete structures, and there is little to recommend a detour, save for — ironically — Vibo’s institute of criminology.

Some 47 percent of young people are without jobs in the province, the fifth-highest rate in Italy.

“Vibo is a sad city, washed-up, that makes people ugly and doesn’t inspire them to give their best,” is how blogger and journalist Argentino Serraino describes his home town.

“That doesn’t mean it should continue that way, though,” said the 25-year-old.

Decades of ‘Ndrangheta interference have contributed to Vibo’s economic decline, through public funds siphoned off, businesses that shut rather than pay protection money, or entrepreneurs denied public contracts due to bid rigging. The phenomenon repeats throughout Calabria.

And despite the ‘Ndrangheta’s near-monopoly on the European cocaine trade and billions laundered through investments in the legal economy across Italy and internationally, the mafia still squeezes the locals.

The trial includes countless allegations of usury, property owners forced to sell below price to the mafia and shopkeepers and others routinely asked for “contributions”.

Not everyone in Vibo is convinced the state has their back.

The indictment includes one Vibo merchant as both victim, and accomplice, of the ‘Ndrangheta, underscoring the murky grey zone often seen in mafia territory.

“They’ve ruined my life,” Rocco Tavella said, of authorities who kept him behind bars for five days after the 2019 sweep.

Tavella, who prosecutors say was pressured to sell clothing below cost to mafia members, denies being an intermediary in a 2011 money-lending episode, as claimed by one of the many informants turned state’s witnesses in the trial.

“We’ll see how many people are acquitted,” he said sceptically.

One woman, Paola, who did not want to give her last name, said Vibo residents are paranoid, given the close-knit family and social ties with the accused.

“You can’t lock someone up for just hearing something, or being seen with someone,” she said, complaining that prosecutors had gone over the top in not limiting arrests to senior bosses.

“Am I not supposed to greet these people anymore?”

The battle against the ‘Ndrangheta is made harder by scarce resources, said prosecutor Falvo.

Few veteran magistrates want to move to the area, so cases are fought by young, inexperienced lawyers who move on to other jobs at the first opportunity.

“How can we fight a war on the mafia with bare hands?” he asked.

Violence has not ended in Vibo. Last month, a defendant in the trial was shot, allegedly by the son of a mafia boss.

Security video images showed cars driving past the wounded man, and no witnesses — not even the victim — came forward to denounce the crime.

“It felt like we went backwards three years, all our work up in smoke,” said the carabinieri’s Capece.

Restaurant owner La Scala said that when he was being threatened, he questioned whether he should leave Vibo.

“Calabria is such a beautiful place, and Vibo is the most beautiful of the beautiful — mountains and a splendid sea,” said La Scala.

“If only it weren’t tarnished with this cancer of the ‘Ndrangheta.”