In a statement released on Sunday, Ontario’s Liberal Party say they’ve asked the chief electoral officer for the province to look into Ford Nation Live, which produces TV-news style videos.

As Digital Journal reported Friday, to counter what candidate Doug Ford is calling “media bias” and to get his message across to the voters without it being filtered by reporters, Ford has taken matters into his own hands, using a recognizable journalistic format: “TV news-style” videos that are actually political advertisements.

And the format is exactly the problem, say the Liberals. The videos look like television news broadcasts, with staffers speaking directly to the camera and interviewing supporters using Ford Nation-branded microphones. And there is a note, if you look for it, at the bottom of the website saying that it was authorized by the CFO for the Ontario Progressive Conservative party.
READ MORE: Doug Ford’s Ontario campaign looking a lot like Trump’s 2016 run
It is easy to see why many voters might see the YouTube videos as actual televised news stories instead of political advertising. The Liberals allege that Ford is trying to pass off “political advertising” as media coverage, pointing out that nowhere in the videos does it say they have been created by Doug Ford’s party, although the videos do promote Ford Nation. 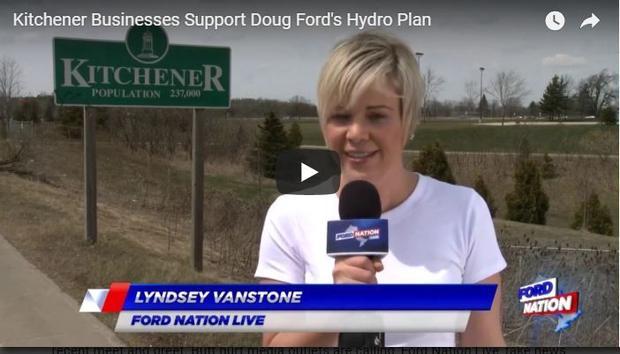 It is easy to see why people could be confused when looking at the Ford Nation video.
Ford Nation

“The Conservative campaign is not just misleading Ontarians, it may be running afoul of election laws,” a statement from the Ontario Liberal party says, according to CTV News. “Nowhere on the Ford’s Fake News videos does the Conservative Party identify itself as having created it — a requirement in the Elections Financing Act.”

Jack Siegel, a lawyer for the Liberal Party, says the party is concerned that people viewing the videos on Facebook, YouTube, or other social media sites may not fully realize they are campaign ads.

“There’s an effort to pass (the videos) off as news, and people who see them casually — maybe not paying close attention, or looking at them with a questioning eye — might not pick up on the fact that these are just Tory ads,” he says.
ICYMI: Trudeau — Recreational cannabis will be legal by this summer
A spokesperson for Doug Ford said his campaign is not worried about the investigation request.” Unlike Kathleen Wynne who is campaigning on the taxpayer’s dime, we are following the Elections Ontario rules,” said Melissa Lantsman, Ford’s communications director.