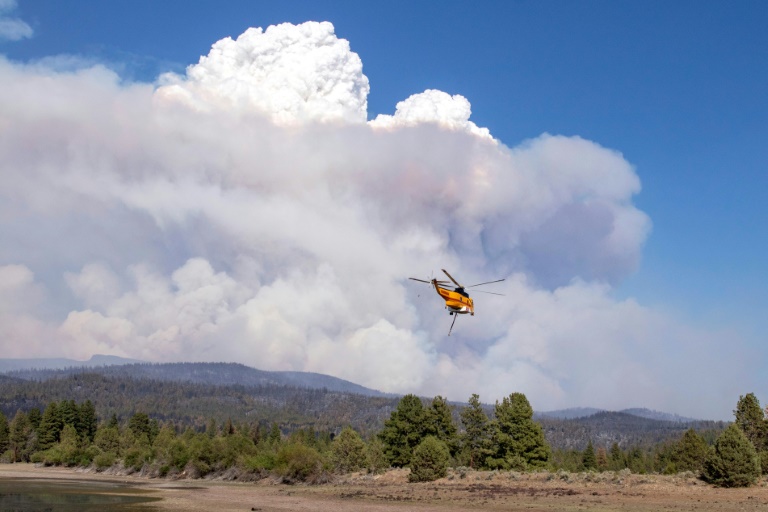 The Bootleg Fire near Oregon’s border with California grew overnight to 240,000 acres — larger than New York City, and by far the biggest active blaze in the US — while remaining just seven percent contained.

“We are continuing to use every resource, from dozers to air tankers to engage where it’s safe to do so especially with the hot, dry, windy conditions predicted to worsen into the weekend.”

More evacuations orders were issued late Thursday as firefighters had to withdraw from fast-growing flames and “extreme fire conditions” to the east of the blaze, which began 10 days ago and has grown at 1,000 acres per hour since.

“I was out there,” said Frank Lee Smith, an evacuated resident of Klamath County in Oregon.

“I saw the flames creeping up the side of the bluff about a mile away towards our place and got the call to pack up and go so I threw what I could in the truck and the two dogs and we took off.”

The fire also poses a risk to neighboring California’s power supply, threatening to plunge residents into darkness, as has happened in past years when heatwaves have strained the state’s grid.

California Governor Gavin Newsom announced further reinforcements would be sent to help fight the Oregon blaze, even as California battles its own fires, said the governor’s office’s Emergency Services in a statement.

“Climate change impacts are contributing to wildfires that are increasingly dangerous and destructive across the Western US,” it added.

Climate scientist Daniel Swain warned that the risk of wildfires ignited by dry lightning strikes forecast in California for this weekend is “quite high.”

Last year’s August Complex fire — the largest in modern California history, which destroyed an area the size of Delaware — was triggered by a massive series of thousands of lightning strikes.

Due to a “long period of unrelenting and frequently record-breaking heat,” California brush is drier than it would usually be at its August or September peak, warned Swain, of University of California, Los Angeles (UCLA).

But it is “very unlikely there will be nearly as many dry lightning strikes as occurred in Aug 2020,” he tweeted.

In Canada, some 100 Mexican firefighters were scheduled to arrive in Toronto on Saturday to fight fires in northwestern Ontario, provincial authorities announced Friday.

Air quality alerts were issued across four of the country’s provinces, as fires sent up clouds of smoke.

“It all changes so quickly based on the wind,” said Graham Leggett, 34, who works at the Art Gallery of Alberta, in western Canada.

“Yesterday in the morning at 8 am it was perfectly clear and sunny and then by 10 am it was so smoky you could barely see,” he told AFP.

Rory MacLean, 34, an employee at the public library in Saskatoon in Saskatchewan said smoke levels had worsened.

“Growing up here, I don’t remember there being that many smoky days, but in the past 10 years there seems to be an uptick in the number of forest fires.”

Officials anticipate high temperatures over the next few days from Alberta to Ontario — though none as extreme as the record 121 degrees Fahrenheit (49.6 degrees Celsius) recorded near Vancouver three weeks ago.

Scientists say heat waves arriving in the western US and Canada in late June would have been “virtually impossible” without human-caused climate change.