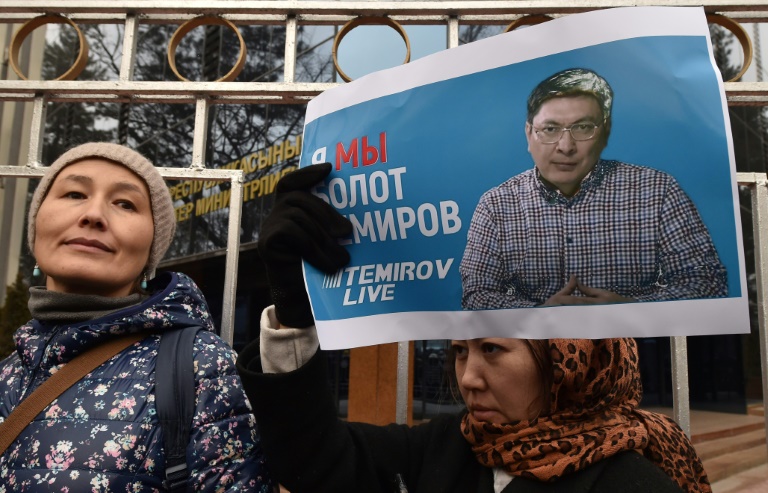 A renowned investigative journalist in ex-Soviet Kyrgyzstan has been charged with possession of narcotics, police said on Sunday, days after he released an investigation into the fuel business of a powerful political family.

The move has raised fears of a media crackdown by the Central Asian country’s new president, whose tenure has seen the arrests of high profile politicians and increasing controls over civic organisations.

Around 200 supporters of Temirov including fellow journalists gathered outside the interior ministry on Sunday, with some calling for the minister’s resignation.

In a statement Sunday, police in the Central Asian country’s capital Bishkek said Temirov and his colleague Bolot Nazarov had been arrested on a charge of “possessing illegal narcotics”.

Temirov and Nazarov were released following detention but are barred from leaving the country.

In footage of the journalist filmed during his arrest, Temirov said he believed police had planted drugs in his pocket.

The Norwegian Helsinki Committee watchdog said in a tweet Sunday the planting claim must be promptly investigated “to prevent speculation that authorities are cracking down on media outlets investigating top-level corruption”.

The charges come after Temirov Live reported on alleged profiteering in the fuel industry by a relative of Kamchibek Tashiyev, Kyrgyzstan’s security committee chief, who came to power alongside current president Sadyr Japarov during unrest in 2020.

Japarov said on Sunday he would ensure the case was “investigated fairly” but pledged support for Tashiyev, a long-term ally.

“Kamchibek (Tashiyev) explained in detail … that the accusations against him were completely false.”

At a news conference, Tashiyev denied his committee had influenced the investigation into Temirov or his staff and called the report on his nephew’s fuel business “a lie”.

“I have never been involved in corruption… that is my lifelong position,” Tashiyev said.

Tashiyev accused Temirov’s colleague Nazarov of being “addicted” to narcotics and using a bong to smoke illicit substances, without offering proof for the claim.

Nazarov, a poet and musician noted for his talents on a lute-like instrument, the komuz, was supported by fellow musicians who played outside the city police department until he was released a few hours after Temirov on Sunday afternoon.

Kyrgyzstan’s vast, oil-rich neighbour Kazakhstan has been rocked by political unrest that authorities there said has left 225 people dead after protests against an energy price hike began at the turn of the year.

But mountainous Kyrgyzstan has long been the region’s most politically volatile country, with three of the country’s six post-independence leaders forced out of office since 2005 amid street rallies over corruption, nepotism and rigged votes.

In this article:kyrgyzstan, Mass, Media, Politics