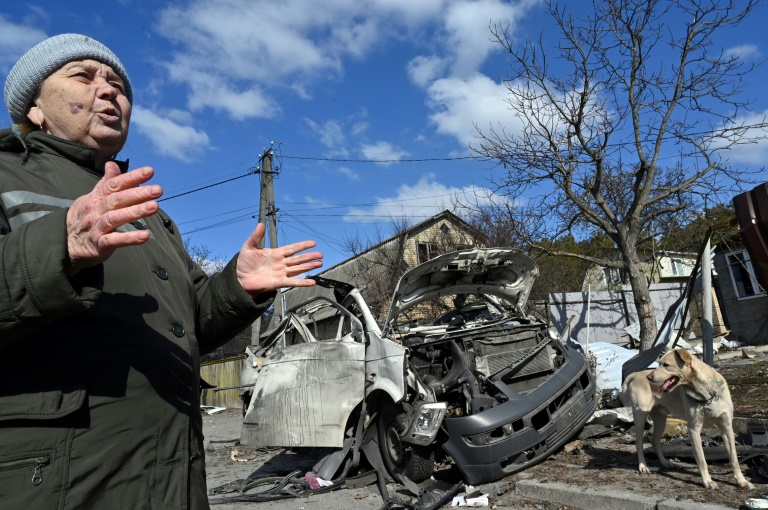 A young Ukrainian mother was recovering after giving birth to twins in one of Kyiv’s top maternity hospitals when shrapnel punched a hole in the window, scattering shattered glass inside.

The next day, after a night in a bunker, she and the other mothers and babies were evacuated and the clinic became a frontline aid station for wounded soldiers and civilians.

On Thursday, with the world stunned by the far more devastating Russian strike on another maternity unit in the southern city of Mariupol, the hospital director had a message for Western leaders.

Valeriy Zukin was a world-renowned expert in maternal health and CEO of a private clinic in the wooded suburbs of northern Kyiv. Now he is running emergency care for the war wounded.

He does not want humanitarian aid from the West — he wants Ukraine to have political and military support, to enable it to see off the Russian invasion without surrender.

“I have lots of questions from abroad: ‘Which kinds of humanitarian therapy do you need?’ I prefer to buy the pills, not to receive from charity,” he told AFP.

“It’s like asking a man with a noose round his neck if he needs water. First get the noose off our necks.”

Zukin’s Leleka clinic, a short distance from the frontline village of Horenka, has not suffered the massive destruction of the Mariupol maternity hospital which was hit by Russian air strikes on Wednesday, triggering global outrage.

But the glass in the front door of the hospital was shattered by shrapnel, and there are two holes in the facade, one where the post-natal recovery room hosting the recovering mother was hit.

Now the mothers and babies are gone, sent home or moved to hospitals further from the guns, in central Kyiv.

But Leleka remains open, and an olive green military ambulance — itself pockmarked by shrapnel hits — is parked behind the statue of a stork bearing a child.

And in the wintry woods around the clinic there’s the dull thud of outgoing artillery and mortar fire — the Russian forces are now barely six kilometres (four miles) away.

The job of bringing wounded civilians to the clinic falls to 43-year-old Vasyl Oksak, the local commander in Ukraine’s civil rescue service.

“There have been harsh clashes some six kilometres from here,” the 43-year-old told AFP.

“Our soldiers are here, repelling the enemy. The evacuation of civilians is underway from the parts of the village where there is no fighting currently.”

His area includes the village of Horenka, a loosely spread community of modest detached homes and gardens on the edge of the municipal boundary.

Several of the homes have been hit by Grad missiles, fired from Russian truck-mounted multiple-launch rocket systems.

One house stands roofless and burnt out while behind it the plastic walls of a greenhouse have been ripped by the blast, exposing a full crop of spring crocuses to the chill blast of winter.

Many of the damaged homes are deserted, with listless dogs and cats wandering among the broken glass, begging for food from strangers and nosing at the frozen water in their bowls.

Chickens have the run of debris-strewn gardens, which often have corrugated metal fences, now twisted and flapping in the wind and punctured with holes from missile shrapnel.

“The shell hit this wall and there was a natural gas pipe,” Oksak told AFP during a tour of the wreckage, uncovering a twisted lump of metal that had been ripped into dangerous projectiles.

“This is a child’s chair, these are a child’s shoes,” he said. “See this, this was a child’s room. Children were living here.”

Nearby, a white minibus was completely destroyed by a direct hit, but soldiers walking between their checkpoints paid it no more attention than they do to the sound of tanks manoeuvring in the woods.

According to local retiree Nataliya Mykolaivna, 64, the minibus had belonged to volunteers bringing supplies and gifts to frontline soldiers and hard-pressed residents.

“These guys drove here and stopped their van. They had some boxes with sweets. We were standing over there and they told us, ‘Come here, let us give you some sweets’,” she said.