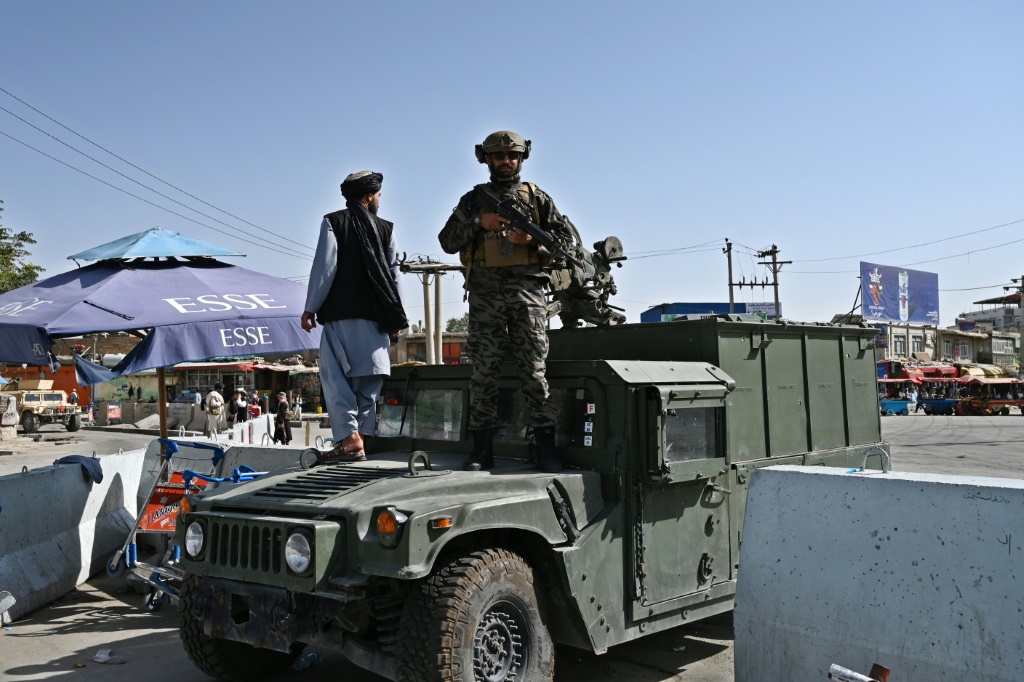 From the surprisingly swift collapse of the Afghan government to a devastating suicide bombing that killed US troops, President Joe Biden has been adamant on ending America’s longest war.

Here are some of the key moments in the run-up to the departure, on Tuesday Kabul time, of the last US troops nearly 20 years after the invasion:

Biden entered the White House with a pressing choice on whether to honor a February 2020 agreement with Taliban insurgents reached by his predecessor Donald Trump to withdraw US troops by May 2021.

Biden, who as vice president under Barack Obama had unsuccessfully pressed to wind down the war, in April confirmed his decision: a clear yes. 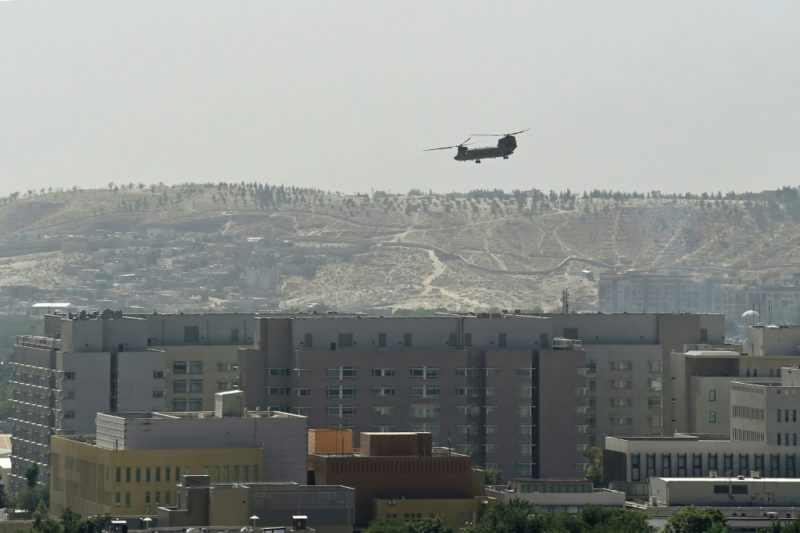 A US Chinook military helicopter flies above the US embassy in Kabul on August 15, 2021. — © AFP

Biden said he would withdraw all troops by September 11 — the 20th anniversary of the Al-Qaeda attacks that prompted the US invasion.

The decision reflected a growing bipartisan consensus, although some Republicans accused him of handing a symbolic victory with the date, leading Biden to move it up to August 31.

The 2020 deal in Doha linked the US withdrawal to the Taliban not providing sanctuary to international extremists such as Al-Qaeda, and set up the first talks between the insurgents and the Kabul government. 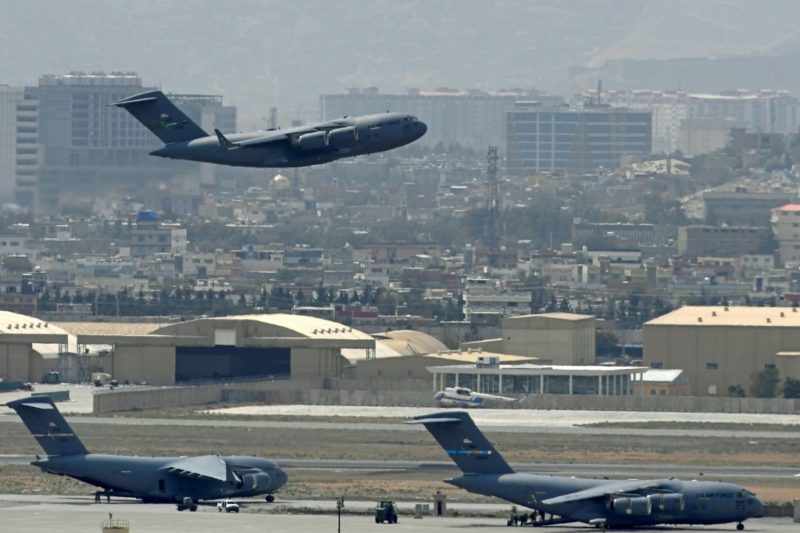 A US Air Force aircraft takes off from the airport in Kabul hours before the American withdrawal was completed after 20 years of war. — © AFP

Biden, in an April 14 speech, made clear that the pullout would go ahead regardless of conditions on the ground, arguing that the United States has already achieved its core mission of holding Al-Qaeda accountable and that there was no further reason to invest US lives and treasure.

As late as May, Zalmay Khalilzad, the US negotiator behind the Doha agreement who was kept on by Biden, was cautioning at a congressional hearing against mass evacuations of interpreters and others who worked for US forces, saying the future Afghanistan needed them.

Ashraf Ghani, the elected president of Afghanistan, similarly pushed Biden at a White House meeting in June to use discretion, not wanting the United States to telegraph that it thought the government would fall.

But on July 14, with the Taliban making rapid gains, the United States began “Operation Allies Refuge” to airlift out hundreds of thousands of allies who fear retribution by the Taliban. 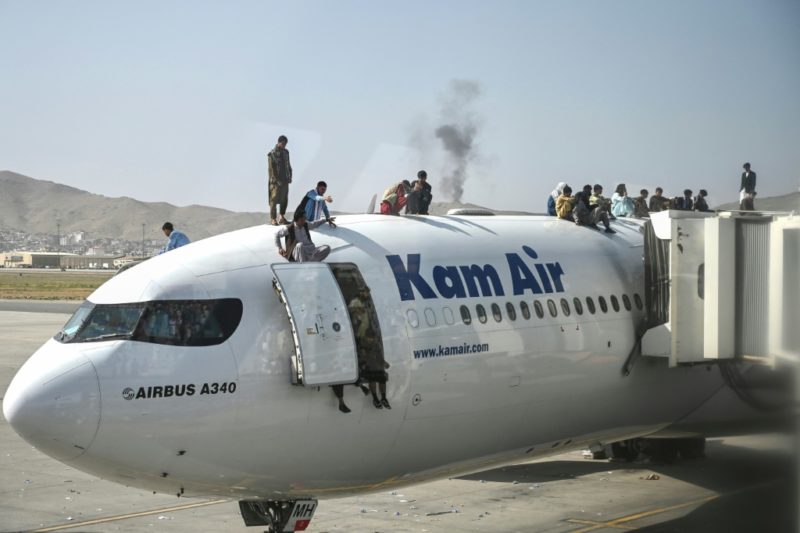 Afghan people climb atop a plane at the Kabul airport on August 16, 2021, after a stunningly swift end to Afghanistan’s 20-year war, as thousands of people tried to flee the Taliban. — © AFP

Biden’s critics lashed out at what they called a late effort to rescue Afghans who risked themselves for the United States.

But the Biden administration noted that the Special Immigrant Visa program that brought in Afghans had been virtually at a standstill under Trump, a virulent opponent of non-European immigration.

More than 123,000 people, including 6,000 US citizens, were ultimately flown out, most in the final days after US forces took over the Kabul airport, in one of the largest airlifts in history.

Both Biden and Trump had acknowledged fears that the Afghan government established after the 2001 invasion would not survive. But few expected it to collapse within days.

US troops quietly left Bagram, their sprawling air base, before General Scott Miller relinquished command of the Afghanistan war on July 12. The Taliban quickly encircled northern strongholds of the government before a nationwide sweep that ultimately relied more on persuading soldiers to surrender than on attacks. 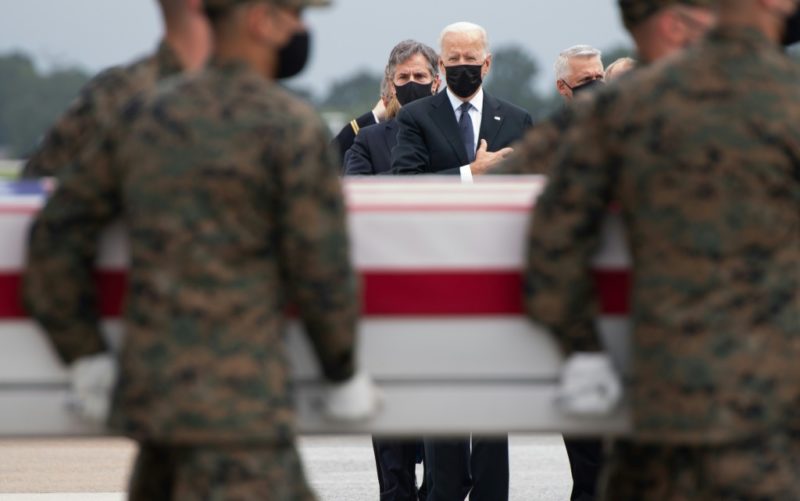 US President Joe Biden(C) attends the ceremony for the return of the remains of 13 US service members killed in Kabul days before the final US military withdrawal from Afghanistan. — © AFP

On August 15, two days after the Pentagon said the fall of Kabul was not imminent, Taliban fighters entered the capital with little resistance and Ghani fled.

For supporters of the government, the United States failed through its exit not only troops but contractors essential to the government’s air power.

But Biden saw vindication in the quick collapse of the Afghan National Army, in which the United States had invested billions.

“We gave them every chance to determine their own future. What we could not provide them was the will to fight for that future,” Biden said after the fall of Kabul.

For Biden, whose late son Beau served in Iraq, ending the war was deeply personal. After nearly 2,500 US war dead in Afghanistan, he did not believe any more should perish.

But on Thursday, Biden’s worst scenario came true as 13 US troops were killed in a suicide bombing outside the Kabul airport as they checked the throngs of Afghans rushing to leave.

More than 100 Afghans — who have borne the brunt of casualties in the war — also died.

Biden, who showed visible emotion, warned that another attack was “highly likely” but vowed to complete airlifts.

By August 31 in Kabul, the last US soldier departed with no further casualties. Biden declared the operation a success — and the Taliban celebrated victory.