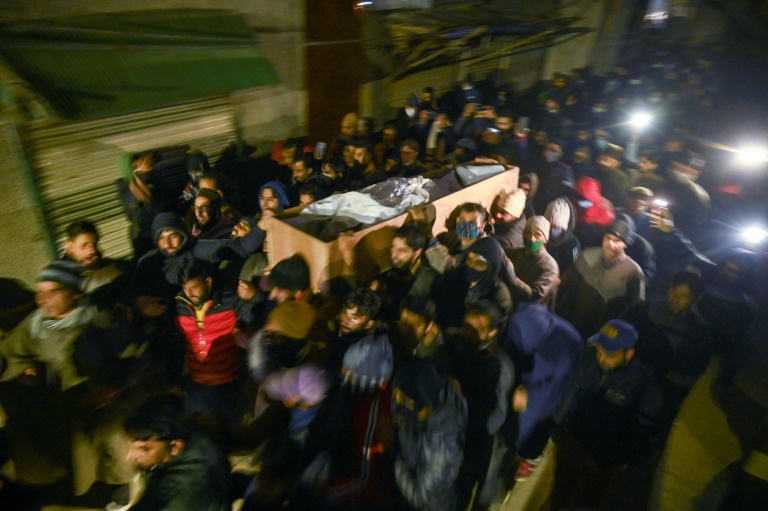 Thousands of Kashmiris defied the biting winter cold to attend the funerals Friday of two men killed during a security operation, heralding a widespread shutdown in the Indian-administered territory.

The pair — who police said had died in “crossfire” on Monday in a gunfight with suspected separatists — had been hurriedly interred by authorities in a remote graveyard.

The deaths sparked anger in the restive region with their families insisting they had no links to the militants, accusing security forces of murdering them in “cold blood” and demanding their bodies be returned for a proper Islamic burial.

Officials on Thursday ordered a probe into the killings of Mohammad Altaf Bhat and Mudasir Ahmed Gul before exhuming their remains and handing them over to relatives amid wails and emotional post-midnight scenes in Srinagar.

Thousands of people turned out for their pre-dawn reburials, with some angry mourners shouting “we want freedom!” and others reciting Quranic verses, an AFP photographer on the scene said.

“Your death has shattered us completely,” Bhat’s niece Saima Bhat posted on Twitter, adding she did not know “if we’ll be able to cope up from this tragedy!”

Family members told AFP that officers had instructed them to bury the men at night and not to allow crowds to assemble.

“There was just about enough time for our family and his children to have a last glimpse,” said one of Bhat’s relatives, declining to be identified.

Residents in large parts of the territory observed a complete shutdown later Friday to protest the killings, in response to a call by the All Parties Hurriyat Conference, a group of separatist parties seeking self-determination for Kashmir.

Shops and business establishments stayed shut across Srinagar and public transport did not circulate, with only a trickle of private cars on the roads.

Similar shutdowns took place in most main towns across the highly militarised disputed territory, which is also claimed by Pakistan.

Police and paramilitary troops in riot gear were deployed in force in the dead men’s neighbourhoods and at some “volatile points”.

Such shutdowns have been largely impossible since 2019 when New Delhi annulled the region’s partial autonomy and brought it under direct rule, but with tensions at a peak authorities decided not to intervene on this occasion.

Police in Kashmir have previously denied families access to the bodies of slain militant suspects or their “associates”, saying it helps stop the “glorification” of anti-India rebels, whose funerals were usually attended by thousands of people.

Kashmir has been divided between India and Pakistan since their first war over the Himalayan region soon after independence in 1947.

The South Asian arch-rivals claim the territory in full but separately administer parts of the region.

An armed rebellion against Indian rule erupted three decades ago and the conflict has left tens of thousands of people, mostly civilians, dead so far.