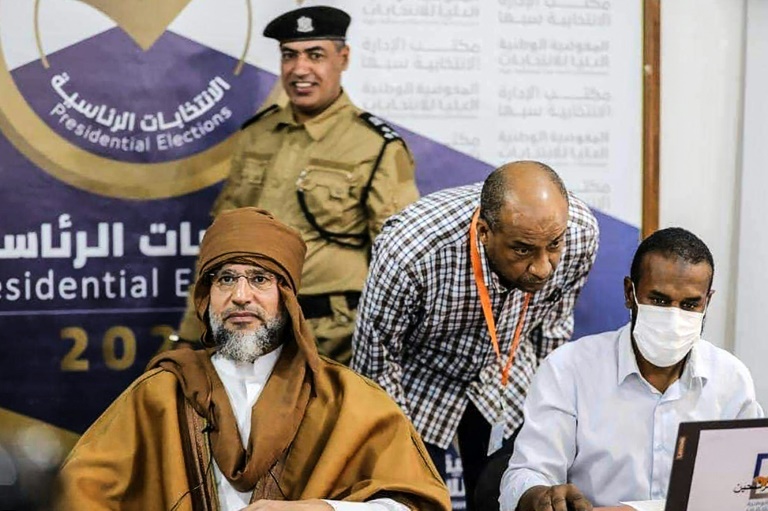 Seif al-Islam Kadhafi, son of slain Libyan dictator Moamer Kadhafi and once seen as his heir apparent, Sunday threw his hat into the ring for Libya’s presidential election.

Libya’s first ever direct presidential poll, with a first round on December 24, would mark the climax of a process launched last year by the United Nations to try to draw a line under years of violence since the revolt that toppled Kadhafi in 2011.

Wanted by the International Criminal Court (ICC) for crimes against humanity allegedly committed during the NATO-backed uprising, Seif al-Islam registered in the south of the country.

“Seif al-Islam Kadhafi submitted… his candidacy for the presidential election to the High National Electoral Commission office in the city of Sebha,” the commission said in a statement.

It said he had completed “all the required legal conditions” and that he was also issued with a voter registration card for the southern Sebha district.

The 49-year-old, sporting a salt-and-pepper beard, recited a verse from the Koran and thanked those assisting him, saying: “God bless you”, video footage showed.

Both are slated for December 24, but in early October parliament split the dates of the vote by postponing legislative elections until January.

Foreign powers have been pushing hard for both elections to be still held on the same date, as agreed at UN-led talks last year.

Speculation had been mounting for months over a possible presidential bid by Seif al-Islam, who was also sentenced to death by a Tripoli court in 2017 for crimes committed during the revolt.

In July, Seif al-Islam, 49, emerged from years in the shadows and told The New York Times he was planning a political comeback.

In a rare interview, he said he wanted to “restore the lost unity” of Libya after a decade of chaos and did not exclude standing for the presidency.

“I’ve been away from the Libyan people for 10 years. You need to come back slowly, slowly. Like a striptease. You need to play with their minds a little,” the paper quoted him as saying.

Until the interview, Seif al-Islam had not been seen or heard from since June 2014, when he appeared via video link from Zintan, in the west of the country, during his trial by the Tripoli court.

Although the court sentenced him to death in absentia, a rival administration in the east pardoned him in a decision never confirmed by authorities in Tripoli.

The militia that was holding him in Zintan has repeatedly refused to hand him over to the ICC and freed him in 2017.

A spokesman for the ICC, Fadi Abdallah, told Libya’s Al-Ahrar television that the court based in The Hague still wants Seif al-Islam.

“According to a notice published in 2011 Seif al-Islam is still wanted by the ICC,” he said.

Analysts say Seif al-Islam’s bid for the presidency will be problematic for Libya’s electoral process.

“In his first free appearance since 2011, Seif al-Islam Kadhafi submits his candidacy… despite facing arrest warrants by the ICC,” said Wolfram Lacher, a senior associate at the German Institute for International and Security Affairs.

“This is only going to complicate the electoral process further,” he wrote in a tweet.

World powers meeting in Paris warned Friday that Libya was at a “crossroads” which would determine its future.

“We urge all Libyan stakeholders and candidates to respect their commitments towards holding elections on 24 December 2021 (and) to accept the results of free, fair and inclusive elections,” they said in a statement.

But despite a year of relative peace following a ceasefire between eastern and western camps, the process has been overshadowed by wrangling over the legal basis for the votes and the powers attached.

Former interior minister Fathi Bashagha has confirmed he will run, while others expected to do so include diplomats Aref al-Nayed and Ibrahim Dabbachi, as well as comedian Hatem al-Kour.

“On December 24, Libyans will be able to choose a president… from among a former aggressor, a man who committed war crimes to seize power, and another one known for his obscene corruption,” said Tarek Megerisi, a senior policy fellow at the European Council on Foreign Relations.

He was alluding to Seif al-Islam, Haftar and Dbeibah.