Gordon Douglas Chalmers, a law lecturer at the Queensland University of Technology, was charged last November with possession of child exploitation material and using a carriage service to groom and procure children under the age of 16 years for sexual purposes. It was alleged he used multiple platforms including Facebook and Skype to communicate with children while posing as the Canadian pop star.

The Australian Federal Police were tipped off to Chalmers’ alleged activities by German police and the U.S. Department of Homeland Security. At the time of his initial arrest, Australian police obtained warrants to search Chalmers’ computer and other electronic devices.

As a result of these searches, Chalmers was charged with an additional 931 child sex offences this week. The law lecturer is alleged to have victimized 157 children throughout the world. The new charges against Chalmers include three charges of rape and five counts of indecent treatment of children under the age of 12.

It is alleged these offences were carried out over a period of 10 years.

Police concerned about how easy it was to impersonate Bieber 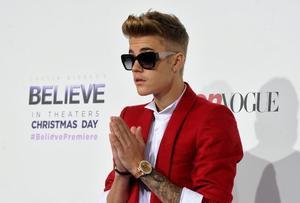 Inspector Jon Rouse, of the Queensland Police Service, described the offences as “horrendous.” He said the fact so many minors actually believed they were communicating with Bieber shows a rethink is needed in teaching children about online safety. He said the investigation showed how those who groom children have a global reach and how vulnerable children can be when using social media and other online applications.

Police are warning both fans and their parents to be vigilant when using the Internet.

Chalmers not the first person charged after impersonating Bieber

In January, a 24-year-old Massachusetts man was arrested after it was alleged he impersonated Bieber online. According to the Los Angeles County Sheriff’s Department, Brian Asrary admitted to extorting a nine-year-old girl in 2014. It is alleged he saw the young girl comment on Bieber’s Instagram page and told her he could arrange for her to communicate with the pop star. Asrary then allegedly posed as Bieber and asked her to send him nude pictures. He threatened to harm her if she did not comply.

According to the sheriff’s department, Asrary said he also convinced other girls to send him pictures. The 24-year-old faces several charges including extortion and possession of child pornography.

Chalmers is scheduled to appear in a Brisbane court on Apr. 6. In a coincidence, at the time the 931 charges were laid, Bieber was in Australia on his Purpose World Tour.