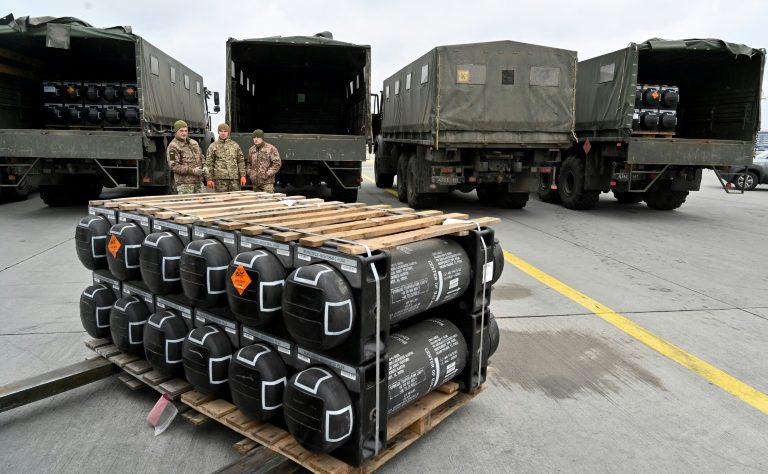 Images of Ukrainian troops carrying Javelin missile launchers on their shoulders have flashed around the world, making the anti-tank weapon — capable of piercing the most sophisticated armor, and particularly useful in guerrilla warfare — a symbol of Ukrainian resistance to Russia’s invasion.

Western states, which want to support Ukraine militarily without entering into direct conflict with Russia, have massively stepped arms deliveries to the Ukrainian army since Moscow launched its invasion on February 24.

According to a senior US official, the Ukrainians have already received some 17,000 anti-tank weapons from various Western countries, including several hundred Javelin launchers, and Washington announced on Saturday new military aid totalling $200 million and including the anti-tank weapon.

But it is the US-made Javelin that has become the weapon of choice, to the point that a meme circulating on social media has transformed it into a religious icon borne by Mary Magdalene, an emblematic saint of the Orthodox church.

Dubbed “Saint Javelin,” protector of Ukraine, she brandishes one of the missiles under a halo in the yellow and blue of the Ukrainian flag.

As well as becoming a symbol of support by the United States, Ukraine’s most powerful ally against Russia, the Javelin is also prized by the military for its technical characteristics.

Equipped with two explosive charges, it can pierce the most sophisticated tanks in the world, and in particular the Russian T-90, whose own explosive armor reacts to the impact of a projectile in order to reduce or even stop it penetrating the tank.

The first charge of the Javelin explodes on contact with the tank, and it then releases a second, more powerful charge, which pierces the armor.

With a range of 2,500 meters (yards), it can be used in direct attack mode to destroy a target or, if fired upwards, to shoot down a low-flying aircraft such as a helicopter.

But it can also be used in indirect attack mode, from above: the missile rises up to 160 meters in altitude and then falls vertically on to its target, like the javelins of the ancient Roman legionaries.

It is this trajectory from above that makes it such a formidable weapon against tanks, because the vehicles’ entry hatches are on the top side, and that is where they are most vulnerable.

Lighter than other anti-tank systems that require a tripod, the Javelin can be launched from a soldier’s shoulder.

The projectile is ejected a few meters from the launcher before the propulsion system kicks in, which allows a soldier to be less easy to spot and even allows it to be used from inside a building.

A “fire and forget” type weapon, the target can be locked in before firing and the missile is fully self-guided. The shooter can take cover even before the missile hits its target.

According to a US soldier consulted by AFP, it is very easy to use.

“If you played a video game, you can use it,” he said.

And unlike other missiles, which are generally disposable after use, the Javelin has a fire control unit that is equipped with GPS and an infrared camera with the ability to zoom in close on a target, and which is reusable any number of times.

It is on this unit that the disposable tube housing the missile is attached.

The fire command unit is valuable because “you can use it without ammunitions, to track and look” at the enemy, said the American soldier.

Manufactured by US weapons manufacturers Raytheon and Lockheed Martin, the Javelin costs $178,000, including the launch system and missile, according to the Pentagon’s 2021 budget.

Each replacement missile costs around $78,000.