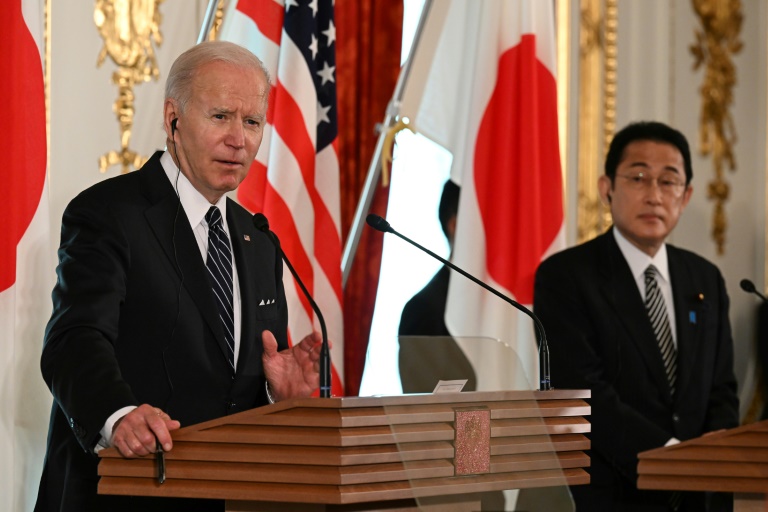 The summit of the so-called Quad grouping takes place with Beijing beefing up its military and carrying out exercises and manoeuvres around disputed territory, including Taiwan.

On Monday, US President Joe Biden warned China it was “flirting with danger” as it steps up military activity around the self-ruled island, which Beijing considers part of its territory.

Biden said Washington would be ready to intervene militarily to defend Taiwan, prompting China to warn the United States it was “playing with fire” and not to underestimate the country’s “firm resolve, staunch will and strong ability”.

Japan too has gradually upped its rhetoric on Beijing’s military moves, cautioning China against attempts to “unilaterally change the status quo by force”.

Tokyo is partnering with Washington to monitor Chinese naval activity, and is particularly concerned about movement around the disputed territory that Japan calls the Senkaku islands and Beijing the Diaoyu islands.

Among some of the four, there are hopes that the loose alliance is being transformed into a more formidable bloc capable of presenting a unified front to Beijing.

“The Quad is showing the world that cooperation among democracies can get big things done,” Biden said Monday after talks with Kishida.

But that unity is complicated by divisions with India — the only Quad member that has not condemned Russia’s invasion of Ukraine.

Biden and his allies have linked a strong response to Moscow’s war to Beijing’s regional ambitions, insisting sanctions on Russia are a deterrent to other powers considering unilateral military action.

That has made India’s pointed refusal to pick sides in the conflict all the more delicate a subject.

And India is likely to push for a softer overall tone to any joint Quad statement, shying away from the more muscular language employed by Washington, Canberra and Tokyo in recent months.

Past statements have focused on calling for a “free and open Indo-Pacific” and warnings against “unilateral” moves in the region — without directly naming China.

“The Quad gives the impression that it is focused on ways to counter China. But India will likely take a neutral stance,” Kazuhiro Maeshima, a professor of US politics at Tokyo’s Sophia University, told AFP.

“In order not to pressure India, (Japan and the US) might focus on things like economy and climate change,” he added.

The meeting will be something of a diplomatic trial by fire for Australia’s Albanese, who flew to Tokyo within hours of being officially inaugurated as prime minister.

The 59-year-old centre-left Labor Party leader said the Tokyo talks would be “a good way to send a message to the world that there’s a new government in Australia”.

Biden arrived in Japan on Sunday after a stop in Seoul as he tries to reassure Asian allies his administration has not been distracted by the war in Ukraine.

Hanging over the regional tour has been the threat that North Korea could be planning fresh missile launches or even a nuclear test.

Speculation that a launch could happen when Biden was in Seoul did not materialise, but Washington has said it remains “prepared” and Pyongyang’s missile programme is also likely to be on the Quad agenda.

In this article:Australia, Diplomacy, India, Japan, US