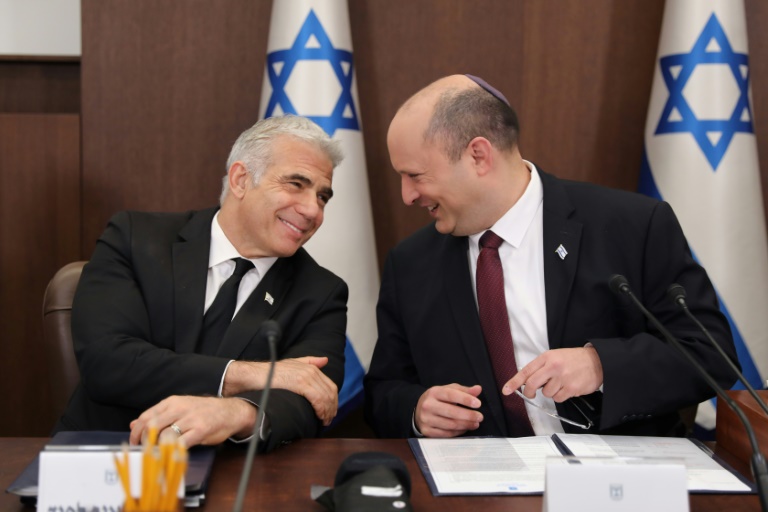 The leaders of Israel’s governing coalition said Monday they will submit a bill next week to dissolve parliament, legislation that would force new elections if approved.

The move comes only a year after the ideologically disparate government came into being, and brings closer to reality a fifth election in less than four years with no guarantee of a viable new administration.

“After exhausting all efforts to stabilise the coalition, Prime Minister Naftali Bennett and… (Foreign Minister) Yair Lapid have decided to submit a bill” dissolving parliament, the two leading coalition partners said in a statement.

The bill will be submitted next week, and if it is approved, Lapid will take over as premier of a caretaker government, they added.

Under that scenario, it would be Lapid who would host US President Joe Biden during his scheduled visit to Israel next month.

Israel’s Haaretz newspaper reported the election would be held on October 25.

Bennett’s ideologically divided eight-party coalition was aimed at bringing Israel out of an unprecedented era of political gridlock.

After former premier Benjamin Netanyahu, a veteran right-winger, failed to secure a parliamentary majority in four consecutive votes, an alliance of his rivals agreed to govern together, united primarily by a desire to end his divisive grip on power.

The coalition — formed of religious nationalists, like Bennett, Lapid’s centrist Yesh Atid party, left-wingers and, for the first time in Israeli history, lawmakers from an Arab Islamist party — was under threat from its inception.

It lost its majority in Israel’s 120-seat parliament, the Knesset, in April when a member of Bennett’s Yamina party announced her departure.

Recent divisions over the renewal of a measure that allows Jewish settlers in the occupied West Bank to live under Israeli law caused fresh friction, with some Arab lawmakers refusing to back it.

That was anathema to hawks in the alliance, notably Justice Minister Gideon Saar, who reject any notion that West Bank settlers live outside Israel.

“As I warned, the lack of responsibility of certain members of the Knesset in the coalition brought this inevitable result,” Saar said Monday in an apparent jab at Arab lawmakers who voted against the West Bank law.

But Saar, a former Netanyahu ally who turned on the ex-premier, said his political goals were unchanged.

“The goal in the near elections is clear: preventing the return of Netanyahu to the premiership, and enslaving the state to his personal interests,” Saar tweeted.

Political analyst and polling expert Dahlia Scheindlin told AFP earlier this week that while surveys continue to show Netanyahu’s Likud party remains Israel’s most popular, there is no certainty that fresh polls will give him a governing majority.

“In all the surveys in the last two months, only one survey gave (Netanyahu and his allies) 61 seats and that one was a few weeks ago, so it is not like there is a trend (of Likud rising),” she said.

The Netanyahu-led opposition had warned it would submit its own bill to dissolve the 120-seat parliament on Wednesday but Bennett and Lapid appear to have moved to pre-empt that opposition bill.

“The decision by Prime Minister Bennett to disperse the Knesset… is a clear indication that Israel’s worst political crisis did not end when this government was sworn into office, but rather merely receded only to return when this coalition failed to find a way to continue moving forward.”

“While this government was one of Israel’s shortest to hold office, it played an historical role by including an Arab party in the coalition and in the decisions made by the national leadership, and therefore paving the way for the possibility of more inclusion by the Arab minority in the political process,” Plesner added.